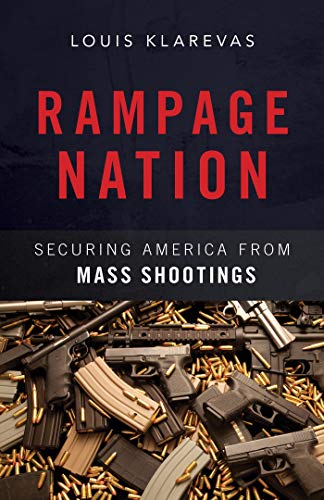 “America is a rampage nation, where mass shootings now pose the greatest credible threat to public safety, surpassing even terrorism.”

In Rampage Nation, Dr. Louis Klarevas uses his expertise on homeland security to provide an overview of mass shootings in the United States, reasons why people engage in this type of violence, and recommendations to minimize this epidemic.

Klarevas illustrates how it is challenging to measure the nature and extent of mass shootings because there is no universal definition of what constitutes a mass shooting. Depending on the source, there are inconsistencies regarding the number of casualties, the location of the shooting, the number of gunmen, and the motivation for the shooting. Consequently, there have been discrepancies in the actual number of incidents considered to be mass shootings across sources.

In order to streamline the concept of a mass shooting, Klarevas proposes that a mass shooting is “any violent attack that results in four or more individuals incurring gunshot wounds.” According to this definition, it does not matter how many shooters there are, if the shooting occurred in public, or the motivation behind the shooting.

Klarevas also provides some commonalities among people who engage in this type of violence. Although the prevalence of violent video games or being bullied are often cited as explanations for mass shootings, Klarevas argues that this is not the case. Rather, the shooters are typically males with a history of mental instability, unstable high self-esteem, and access to a firearm.

There is also debate about the location of mass shootings.  The media often highlight incidents occurring in gun-free zones, and some people argue that mass shooters target these locations because potential victims will not be armed to defend themselves. However, Klarevas found that approximately 90 percent of gun massacres do not occur in gun-free zones, and only 11 percent of these attacks occur in public spaces. Furthermore, 86 percent involved offenders and victims with a prior relationship, indicating that the location is usually irrelevant to the shooters in these incidents.

Throughout the book, Klarevas draws upon what he calls the trinity of violence—unstable perpetrators, vulnerable targets, and lethal weapons. He suggests that by eliminating any one of these elements, the act of violence will be unable to occur. The best way to do this is to prevent high-risk individuals from acquiring firearms.

Thus, Klarevas proposes that the United States, especially at the federal level, needs to do more to regulate firearms. He makes several recommendations, including banning and buying back extended-capacity magazines, expanding prohibitions on gun ownership to include domestic abusers, establishing gun-recovery squads, and enhancing gun-storage laws.

Overall, Rampage Nation is both well written and well researched. Throughout the book, Klarevas offers details about specific mass shooting incidents and provides graphics on topics related to mass shootings. The statistics are easy to understand, and it is important for anyone who wants a greater understanding of mass shootings to read this book.

However, it is likely that individuals who are anti-gun control will be wary of the message and some of the statistics presented in this book. Most importantly, Klarevas could have addressed in more depth how gun control legislation has little effect on the illegal firearms market, and gun control laws are only effective for people who abide by the law. For example, although there are good intentions behind gun buyback programs, they do not actually bring in the guns that law enforcement are seeking. Rather, it is law abiding citizens participating in these programs.

Regardless of your stance on gun control, the statistics indicate that this type of violence is on the rise. Taking population into consideration, the rates of mass shootings have been increasing over the past decade.  Since this book was written, our country has had other mass shootings, including the Orlando Nightclub Massacre, arguably the deadliest mass shooting in our history. Unless we do something, this type of violence will continue to rise. Klarevas’s recommendations are a good starting point.