The Ramblers: A Novel 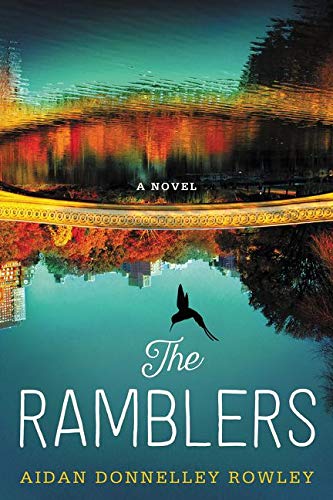 Clio is a lonely only child from New Haven, an ornithologist who guides bird walks through Central Park, works at a museum, and conducts research on hummingbirds in exotic locations. As Thanksgiving and the need to return to New Haven to help pack up the family home creep up, past family secrets paralyze her emotionally. She struggles with commitment with Henry, the charming older Irish immigrant and self-made hotelier who is captivated by his “bird-girl.”

Smith is the outwardly flawless daughter of New York millionaires, gradually emerging from a downslide after an inexplicable engagement breakup. She infuriates her acerbic father by using her Yale education to create her own anti-clutter coaching business.

The thirty-something women share an apartment in the same affluent Manhattan building as Smith’s family. With Smith’s business start-up and rent bankrolled by her father, he wields toxic power over her.

Both women are at a crossroads emotionally, Smith grappling to understand her fiancé’s sudden decision to end their engagement. Clio tentatively tries to overcome her family history so she can learn to trust and take the next terrifying step toward commitment with Henry.

The timeframe of The Ramblers is the week leading up to Thanksgiving and Smith’s younger sister’s wedding. The pacing is well crafted, and the week teems with just the right balance of relationship drama—family tension, secrets, love and romantic angst, flirtations, self-revelation, forgiveness, and just enough yearning lust.

The point of view (POV) in The Ramblers alternates between Clio, Smith, and Tate, at times begging the question, Whose story is this? The opening sections introducing each POV character are rather long, and the novel starts slowly until each character is revealed and familiar. Smith’s and Tate’s sections knit together as their relationship unfolds. While Clio’s and Smith’s friendship links their stories, at times Clio’s narrative reads like a separate thread, satisfying but not fully enmeshed.

Each character in The Ramblers is “at least a tiny bit broken.” Their vulnerably and flaws will resonate with readers, reminding them that everyone is carrying burdens we don’t see, that “no one emerges from childhood totally unscathed.”

Readers will want for these characters what they want for themselves: supportive family, loyal friends, faithful lovers, fulfilling careers, and to do the best they can.