Ralph Lauren: In His Own Fashion 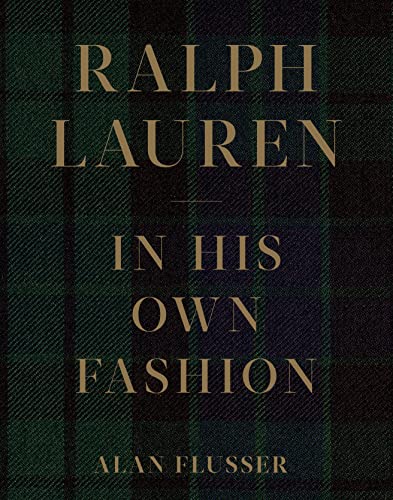 Before even opening this book, this reader was wondering what Alan Flusser could possibly bring to the table on the subject of Ralph Lauren. There are few designers who reflect the ubiquity of Mr. Lauren as well as being an American designer whose life and career has been hugely chronicled for decades.

The devoted fashionphile will experience myriad emotions while reading Ralph Lauren: In His Own Fashion depending on one’s career, life experiences, involvement in the actual world of fashion, or just being an observer or fan of Mr. Lauren. Flusser’s take on Ralph Lauren is at times anecdotal, nostalgic, informative, intimate, sometimes tedious, and even laudatory. In a way Flusser deifies the designer, but throughout the book we are told that Lauren was never trained as a designer and only keeps the best people around to do the heavy lifting. Some might say it’s a kiss and slap scenario, but Flusser is trying to make a point about a man who saw into the future and built an empire based on his own aspirations, inspirations, and gut instincts.

Bernadine Morris wrote in the early 80s with great prescience: “Some insisted it was Lauren’s best collection. The clothes looked exceedingly well-bred, and though they are unassertive, they make a powerful statement.”

Flusser gives the reader the opportunity to absorb the subject matter on so many planes. Some will call it a fashion book, others might call it a biography. Ralph Lauren: In His Own Fashion is unquestionably a superb primer for those who have not read or followed the trajectory of Mr. Lauren. The prospective reader might also find that the book serves as living proof that believing in oneself is paramount when trying to achieve one’s goals. Again, the book’s appeal stretches far wider than just fashion.

The biggest detriment to the monograph is the inclusion of the history of the haute couture and development of ready to wear as well as the history of American sportswear. These subjects have been written about by far more authoritative sources than Flusser. Lastly, comparing Lauren to Chanel at every turn just doesn’t seem quite right or correct.