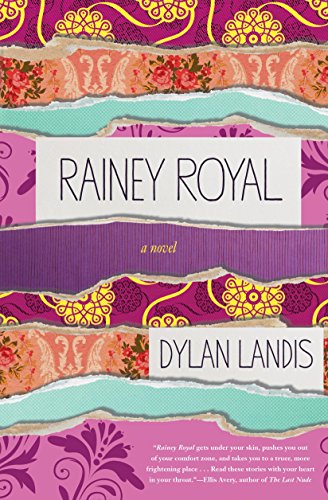 “Rainey Royal is a tough novel with a tender heart—a very good story that flirts with being a great one. Dylan Landis is an author to be watched.”

Rainey Royal and her best friend, Tina, are not your typical armed robbers. They’re teenage girls from fashionable Greenwich Village families. Rainey’s father is a semi-famous musician and music teacher to a generation of talented “acolytes.”

But life isn’t easy for Rainey: her mother’s left the family for an ashram, her possessions are pilfered by acolytes, and her father’s creepy friend, Gordy, is a pedophile with just enough self-control to elude the label.

Rainey acts out: she bullies schoolmates, flirts with teachers, and commits crimes. But she’s not a lost cause. Dylan Landis’s debut novel Rainey Royal is the story of Rainey’s descent and redemption.

Written as 14 interlinked short stories about Rainey, Landis shows readers Rainey’s transformations from adolescent to adult, punk to artist. Rainey accomplishes these transformations gradually and with edgy wit. The book is written in Rainey’s raw but intelligent voice; Landis displays the same edgy wit as her main character.

Landis’s edgy voice is evident throughout the book, as when she has Rainey turn her restless teasing on her friend, Tina.

“A perverse urge to find a fuse in Tina rises in her [Rainey]. And it would be so easy. Tina is like one of those sea corals they saw in a bio-class movie that plant themselves any damn where they please but close up tight as a fist when brushed by something they mistrust. In fact the only thing they do trust is this one fish called a clown fish. Rainey isn’t anyone’s damn clown fish.”

A lesser author would have framed the two girls in a BFF “us against the world” posture. Landis is more complicated than that and so are most of her characters.

The complexity is less evident in Landis’s treatment of Rainey’s father, Howard. He is portrayed as an indifferent parent, or worse. After Rainey is raped by one of Howard’s acolytes, Howard fails to even console his daughter. He dismisses the horrible event by saying: “Ah, Jesus. Have you heard that boy play cornet? Have you listened? An artist can’t be a criminal.”

Perhaps Landis believes that she needed to create Howard and Gordy as monsters to make Rainey’s pathologies more sympathetic to readers. But, in so doing, Landis misses the opportunity to extend her compassion to the single parent of a problem child; a man keeping his family afloat in a fickle profession—a commercially-fading, aging jazz musician facing audiences that want youth and rock ’n’ roll.

At least since Catcher in the Rye—in a steady procession—American authors have offered novels built around young rebels jousting at windmills, of either their own or society’s making. The more optimistic of those authors create characters that ultimately reach accommodation with those windmills. Rainey Royal is among these more optimistic novels, despite the pessimism of the early chapters.

Rainey Royal is a tough novel with a tender heart—a very good story that flirts with being a great one. Dylan Landis is an author to be watched.