Rage Is Back: A Novel 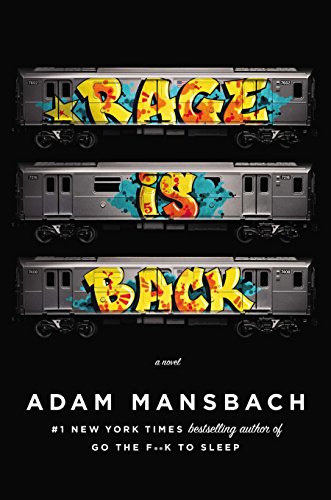 “Mr. Mansbach’s reverent insight into the little known world of authentic graffiti artists is both the most compelling aspect of the novel’s multilayered narrative and a stunning achievement unto itself.”

By about the third time that Adam Mansbach’s narrator in his new novel Rage Is Back refers to himself as “your boy here,” Kilroy Dondi Vance will have utterly endeared himself to even the most out of it reader when it comes to contemporary culture.

Dondi’s narration is the anchoring thread in this novel that both reconstructs and deepens the mythos in and around hip hop culture’s lost element: graffiti art or “writing” or “tagging” as it is often referred to by those who know.

Cultural knowledge and history are at the forefront of Mr. Mansbach’s latest foray into the collective conscious of the hip hop generations.

Knowledge is power for hip hop heads, and in Rage Is Back Dondi drives the narrative through the artistic archives of graf art, DJ-ing, underground hip hop, and the literal underground itself.

Mr. Mansbach achieves these feats by showcasing the breadth and depth of his experiences within the culture, successfully coupling those experiences with an encyclopedic, liberal deployment of relevant literary allusions to everything from classic alternative drug use to Homer’s Odyssey.

Dondi’s journey through NYC circa 2005 (and the 1990s via crafty flashbacks) is a frame through which readers will follow the “prodigal” return of his father, William Vance, also known as Billy RAGE. RAGE leaves and returns some 16 years later to NYC after a series of tragic incidents, including the murder of his best friend and partner in graf artistry, AMUSE, by the almost purely evil antagonist of the novel, Officer Anastacio Bracken.

In addition to leaving his son Dondi fatherless for most his life, RAGE’s odyssey includes a stint in the Amazon rainforest where he learns the shamanic arts of healing and mind alteration.

Mr. Mansbach’s reverent insight into the little known world of authentic graffiti artists is both the most compelling aspect of the novel’s multilayered narrative and a stunning achievement unto itself. If you don’t know, now you know. And this sensibility seeps into each and every sentence about graffiti crews, train bombing, and selling out in Soho.

The fictional graffiti crew around which the narrative centers, The Immortal Five, a “. . . name long smudged with irony . . .” consists of Dondi’s dad, RAGE; his murdered friend, AMUSE; Dondi’s blind friend and mentor, Ambassador “FEVER” Dengue; SABOR, who commits suicide soon after AMUSE’s murder; and the resident hustler of the crew, CLOUD NINE.

In 2005, the much decimated crew—a discombobulated RAGE, a nearly blind FEVER, and CLOUD fresh out of jail—works with Dondi and his mother Karen (also a former graffiti artist), to avenge the coverup of AMUSE’s murder in the most spectacular fashion imaginable for this washed-up crew of old-school graf artists.

If the novel’s education on the world of graffiti writers isn’t enough, Rage Is Back also features shorter but nonetheless intense courses on DJ-ing—via an ode directly to Kid Capri’s masterful record selection skills—and a testament to MC-ing or rapping through a dizzying array of allusions, metaphors, analogies, and similes.

Dondi’s narration skillfully features more similes than in the oeuvre of a rapper who’s been in the game for over a decade. Some, e.g. falling “like the first guy who jumped from the North Tower,” will haunt the reader well beyond the experience of reading the novel, but many more serve to imbue Dondi’s storytelling skills with “greatest-of-all-time” status in the who’s-your-favorite-rapper discourses that continue to drive much of the talk about hip hop.

Rage Is Back also soars through the underbelly of the city. For aficionados of underground concepts in literature, Mr. Mansbach’s craftily constructed underworld will not disappoint. In addition to situating the lived realities of risk-embracing graffiti artists within the context of lost New York City subway tunnels, and the near mythic homeless underground dwellers popularly known as the Mole People, Dondi’s self-reflexive and intermittently self-conscious narration produces meticulous imagery of the world beneath the surface of New York City.

In a simultaneous direct shout-out to the “silent oppressed” of the hip hop world and to the annals of black literary history, the underground passages of Rage Is Back will surely become the substance of graffiti lore for the foreseeable future.

Finally, this novel might also be the one text that helps to put the audio book on the map. There is incredible voiceover talent with Danny Hoch as Dondi. Add to that a host of classic NYC voices: the Wu-Tang Clan’s GZA as the street-venerable CLOUD NINE, and “The Daily Show’s” Wyatt Cenac as the pivotal Theo Polhemus.

And if you still need some help
hearing the narrator’s voice,
the audio version of Rage
is as potent as the words on the page.

Dr. James Braxton Peterson is Director of Africana Studies and Associate Professor of English at Lehigh University. He is also the founder of Hip Hop Scholars, a think tank dedicated to researching and developing the educational potential of hip hop, urban, and youth cultures.