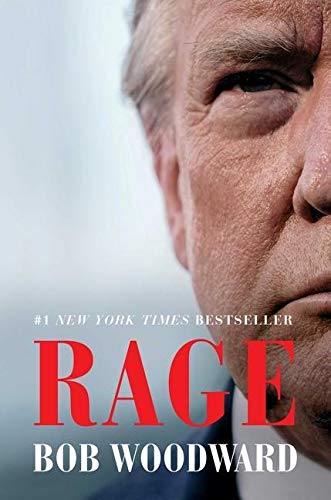 “Rage is essential reading for anyone hoping to understand Trump and his place—as cause and consequence—in American politics.”

“I bring rage out. I do bring rage out. I always have. I don’t know if that’s an asset or a liability, but whatever it is, I do.” With these awkward but nonetheless comprehensible words, presidential candidate Donald Trump in 2016 provided journalist Bob Woodward with a title and a leitmotif for Rage, his second book on the Trump presidency. Woodward’s first book on the Trump administration was Fear: Trump in the White House (Simon & Schuster, 2018). He has also written about other presidents from Richard Nixon to Barack Obama and other facets of power in Washington including the Central Intelligence Agency and the Pentagon.

Based on 17 interviews with Trump from December 2019 to late July 2020, Rage also draws on hundreds of hours of interviews with firsthand witnesses as well as their notes, emails, diaries, calendars, and other documents, including more than 20 letters between Trump and North Korean leader Kim Jong Un.

Some of the most politically sensitive revelations in Rage have already been widely reported—when Trump first learned about the novel coronavirus in late January 2020 and its dangers and the reassurances he proceeded to give the public, Trump explained to Woodward that he wanted to avoid panic, but he may also have believed his own wishful thinking. “Don’t worry about it [Covid-19],” he told Woodward. “We’ll get to do another book. You will find out I was right.” These exchanges leave the reader wondering: Did the president value his claim to omniscience over any wish to be known for reliability and honesty?

The letters between Trump and Kim Jong Un suggest that both men lived in a make-believe world. Trump called them “love letters.” Kim wrote that he felt they were players in a science fiction film. After their June 18, 2018 meeting in Singapore, where Kim pledged “to work toward the complete denuclearization of the Korean Peninsula,” Trump proclaimed on June 13: “There is no longer a Nuclear Threat from North Korea.” In return for this pledge—without consulting the Secretary of Defense—Trump cancelled a joint military exercise with South Korea. As Senator Chuck Schumer observed, “Somehow President Trump thinks when he says something it becomes reality.” More than two years after Singapore, North Korea’s nuclear arsenal is still there and steadily growing.

Rage gives the reader the context for these and other major political events. But it also provides insights into the interactions between the president and those close to him. For example, the book details the steps by which Trump and his helpers invited Rex Tillerson to become Secretary of State and all the factors weighing on Tillerson as he considered the offer. Woodward also details the exchanges between Tillerson and James Mattis, Trump’s first Secretary of Defense, as both men—from very different backgrounds—labored to finesse a constructive partnership.

The book’s “Contents” page lists a Prologue and an Epilogue and Chapters 1–46. The text fills 392 pages but there are no chapter headings. The main logic is chronological. The endnotes tell the reader that many chapters are based mainly on one or two interviews on particular dates. Many endnotes also cite Trump’s tweets, Fox News reports, and articles in the New York Times and Washington Post, where Woodward is an associate editor. Other references include the Mueller report and recent books such as James Comey’s A Higher Loyalty (Flatiron, 2018). But Woodward does not cite books that could provide an historical or theoretical perspective on the Trump White House.

Rage is nothing if not timely. The president phoned Woodward on July 8, 2020 and said he was so busy “I don’t have time to breathe.” Trump asked Woodward to treat him with “fairness,” but did not expect it. Asked about his July 4 talk at Mount Rushmore, Trump said he was responding to a “left-wing cultural revolution . . . designed to overthrow the American Revolution.” The next day he claimed his own movement was “defeating the radical left, the Marxists, the anarchists, the agitators, the looters.”

When Woodward observed that there were no Marxists left, Trump replied “that’s wrong, Bob.” The Black Lives Matter people are Marxists. Woodward countered, “Never forget, we are one family and one nation.” But Trump replied that he had done more for Blacks that any president other than Lincoln. Woodward said Lyndon Johnson did more and that it is “a matter of the heart and spirit.” Here, as in other interviews, Woodward responds to Trump’s assertions with sharp challenges that elicit still more assertions, most of them suggestive of the man’s deep feelings.

Woodward concludes that Trump—lacking discipline, organization, trust in experts, any ability to provide a calming, healing voice—is “the wrong man for the job.” Rage is essential reading for anyone hoping to understand Trump and his place—as cause and consequence—in American politics.