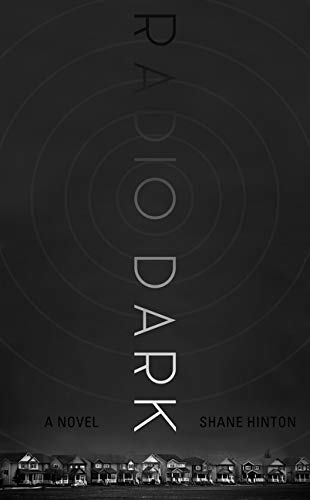 “The future does not look good, but Shane Hinton’s Radio Dark lachrymose fiction does provide some hope for survival in the face of apparent annihilation.”

We know that Armageddon will come. We just don’t know exactly when it will arrive. Scientists now project that 3.5 billion years from today, the Sun will shine almost 40 percent brighter, which will boil Earth’s oceans, melt its ice caps, and strip all of the moisture from its atmosphere. That sounds like the day of reckoning.

Hollywood has milked the coming of the end of time, normally with bands of homicidal gangsters at war with other bands of homicidal gangsters, fighting to secure the remaining rations and secure land to rebuild society. Sometimes, these tales of the desperate will tell us what had happened to cause the disaster, but the real story is about how humans will react to it.

Shane Hinton, an English professor at the University of Tampa, has crafted a novella about the dystopian future that will dazzle the reader with its realism and compassion. An unknown disaster has infected Florida, or at least the part of Florida where the suburbs border on the orange groves. Hinton does not tell us exactly what happened to cause this catastrophe.

That is not Hinton’s story. Rather, it is a narrative about the final days of Memphis, a janitor at a small community radio station. The Federal Communication Commission has sent Cincinnati, a field agent, to make sure the station continues to fulfill all applicable regulations even in the face of the debacle. She is an autocrat of sorts, but the world she would regulate has crumbled.

The radio station Memphis had cleaned goes dark. Cincinnati and her book of procedures will rebuild the station’s power to communicate to survivors by constructing an antenna using the unconscious bodies of those who have succumbed to the affliction. She links the power of useless automobiles and builds a pyramid of affected humans into a radio antenna.

Memphis and Cincinnati establish a personal bond despite the cataclysm that humankind has suffered. In fact, their relationship forms the spine of Hinton’s strange tale. They conceive a child, perhaps symbolic of the continued survival of the human race. It is not an optimistic prediction, however.

Hinton does tell us how the contagion affects humans. They become catatonic with mouths and eyes open. Memphis administers the assignment of now-empty houses to those survivors who come to his neighborhood, called by the new radio signal and the DJ of the dark radio station.

There is one more major player in this short tale: the doomsday preacher who is always followed by his congregation. He does not bring a message of consolation to those afflicted. Rather, he shares with survivors the commanding words of the Almighty. However, religion brings no comfort.

Memphis constructs the antenna with the help of a carpenter who carefully fits the catatonic bodies together. In death, they provide the raw material for continued life, at least until the pyramid falls of its own weight.

Hinton’s story has moments of dark humor, but there is little to laugh about. There is more depression ahead. Memphis begins to feel the weight of the contagion, as his hands deteriorate, and he is left with bleeding stumps. The future does not look good, but Shane Hinton’s Radio Dark lachrymose fiction does provide some hope for survival in the face of apparent annihilation.