Radiant: The Dancer, The Scientist and a Friendship Forged in Light 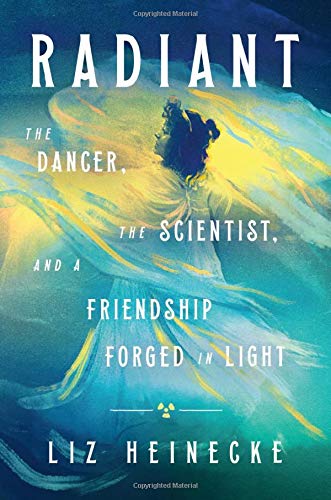 “Liz Heinecke has shined a light on two remarkable women whose work and friendship was a gift to each other and to the world.”

It was an unlikely friendship. One woman was a brilliant scientist, the other a performance artist. One relished public praise, the other spurned it. One will be remembered with awe, the other is forgotten. Yet their bond was strong and not as unlikely as it might seem.

The scientist was Marie Curie, physicist and chemist, who discovered radium and became world renowned for her work with radioactivity. The artist, Loie Fuller, was also known around the world for her dramatic work with illuminated dance. But Fuller was an inventor and a scientist in her own right, although uneducated in science as Mme. Curie was. They met because of Fuller’s interest in the element of light in radium. Their friendship endured to the end of their lives.

Liz Heinecke has captured their lives, their times, and their friendship in a beautifully crafted work of creative nonfiction as gripping as any novel of Belle Epoch Paris. Peopled with star personalities like Picasso, Albert Einstein, Thomas Edison, and Auguste Rodin, the story unfolds in alternating chapters as we watch both women mature, suffer, celebrate, carry on.

Marie Curie was an extraordinary woman. Dedicated to science and compulsive about her lab experiments, which she hoped would benefit humankind, she was supported by the love of her life, Pierre Curie, who was equally dedicated to their joint work, and who supported her in a misogynistic world that thought women and science uttered in the same breath were an oxymoron.

Marie’s entire life revolved around work, and her husband and children, who were largely looked after by Pierre’s father on behalf of the working couple. She labored long days and years in a cold makeshift laboratory, suffered insults and rejection by the scientific establishment, and was almost done out of her first Nobel Prize until Pierre insisted that her name be included for her major contribution to the work they shared.  By the time of her second Nobel Prize in chemistry she was too well respected to suffer such indignity, and gradually her working environment was upgraded, culminating with her association with the Sorbonne and a fully equipped lab that led to her founding of the Institut Curie, still in operation.

In addition to being an early modernist dancer who briefly collaborated with Isadora Duncan, Loie Fuller was a stage craft innovator who held patents for stage lighting, including the first chemical mixes for gels and slides and the first use of luminescent salts to create lighting effects. She was also an early innovator in lighting design, and was the first to mix colors and explore new angles. Known for her Serpentine Dance among others, she was described by one critic as evoking “the otherworldly; [she] materializes what is intangible, [and] brings to our eyes what we would not see.”

Driven, creative, impulsive, forever broke, and a closeted lesbian with a partner called Gab who was her Alice B. Toklas, she was an astounding figure, much loved and revered, and a terrifically supportive friend of Marie Curie. Heinecke describes her like this: “Her true talent lay in her creativity and ideas. She was a blue-eyed shape-shifter who could turn science into art, an alchemist creating dreamlike images that no one had ever before synthesized onstage. Loie painted fabric with light, like her friend Rodin sculpted figures from clay.” No wonder she staggered her audiences when she danced at the Folies Bergere and elsewhere.

Marie was comforted by this visionary woman when she was suddenly widowed at the age of 38, toddler in hand, when Pierre died from an accident crossing the street. She comforted Marie again when years later she was exposed and publicly vilified for having an affair with a beloved colleague. And she was there for Marie as she aged and became increasingly ill from her long exposure to radium, including during WWI when she created mobile vans that could transport rudimentary X-ray equipment she had developed to the edge of battle fields to save lives through guided surgery.

While Loie, who was instrumental in the development of the Art Nouveau and Art Deco movements and who socialized with royalty and other celebrities, emerges as the more colorful character in this fascinating story of friendship and achievement, both women are presented with equal weight and respect. Their individual natures and their important work draws readers in, and knowing about their friendship is a gift for those interested in the arts and sciences.

Loie predeceased Curie who missed her deeply when she gave a speech on NBC radio in 1929 that would be heard all over America. Loie, born in America, had made her home in Paris surrounded by people who valued her free spirit and her avant-garde creativity. Marie, born in Poland, also found a home in Paris. “The City of Light had welcomed them both and let them shine…as they persevered through illness, death, scandal and war. They were both part of the city now, visible in its art and architecture, its culture and its memory.”

In sharing their stories, Liz Heinecke has shined a light on two remarkable women whose work and friendship was a gift to each other and to the world.