Race Against the Machine: How the Digital Revolution Is Accelerating Innovation, Driving Productivity, and Irreversibly Transforming Employment and the Economy 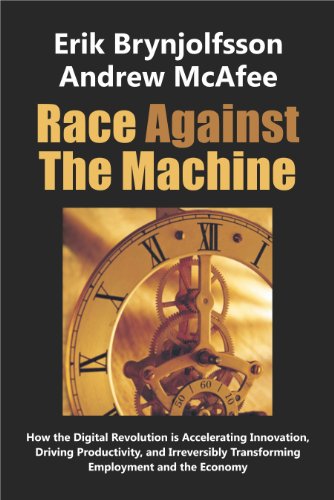 “Supported and illuminated by a series of powerful graphic displays of key changes and realigned relationships, Race Against the Machine is simultaneously sophisticated, yet accessible, balanced in treatment and not ideologically tilted. And, the authors anticipate readers’ ‘What do I do now?’ question by offering a number of actionable policy recommendations. This vitally important book merits the widest of readership.”

A long established certitude in the discipline of economics is that technological advances leads to the elimination of jobs in certain sectors of the economy, concurrently replacing the vanished jobs with even better ones. That economic prosperity led to job creation and wealth creation—more jobs = more wealth = more jobs—was also an unquestioned truism.

Recent events suggest, however, that these two certitudes no longer apply, at least in advanced economies like ours.

While these problems are widely debated, they are also too little understood. In Race Against the Machine, leading technology scholars Erik Brynjolfsson and Andrew McAfee provide an engaging, powerful, essential exploration of the forces and their consequences defining the economy in the 21st century.

A trilogy of factors represent sobering testimony to these great changes in economics, changes that profoundly challenge many individuals, communities, institutions, leaders, and policies:

• In the first decade of the 21st century, the population grew by 30 million, which would normally be supported by some 18 million new jobs, given conventional relationships, for the economy regularly creates significant new jobs in tandem with more people. But no new jobs were created; these dismal job results reduced the country’s employment ratio from 64% to 58%. The middle labor segment, which comprises many jobs, has been most severely impacted, for as the authors say, “In the most recent decade, demand has fallen most for those in the middle of the skill distribution. The highest skilled workers have done well, but interestingly, those with the lowest skills have suffered less than those with average skills, reflecting a polarization of labor demand.”

• Since information technology was first recognized by the U.S. Department of Labor in 1958 as an official job classification, jobs with information content have increased to 60% of the economy. The power, speed, and transformative impact of computer and communications jobs have accelerated at an even more rapid pace, following the famous Moore’s Law, which promulgates that speed and power of microchip capacity double every 18 months. Since 1958, there have been 36 such doublings. The changes now occurring, off of an ever larger base, are consequently ever more impactful.

Opening with a succinct, incisive summary of various economists’ diagnoses regarding why jobs are disappearing, the authors insightfully observe that technology’s effects are generally ignored by economists, who mostly operate with dated, ever less relevant theories, paradigms, and models about how the world works. Still, as incisive as is this commentary—which is far superior to the vast majority of what has been written on the challenges of jobs disappearing—the role of place choice and changing place competitiveness are insufficiently addressed.

Mostly disregarded by economists is how the consequences of place choice and the technologies that have accelerated the expression of place choice have replaced the production of society’s goods and services, in the process transferring the places of work and the places of consumption. Significantly, many U.S. based companies are growing jobs—but in places outside of the U.S. And many U.S. based companies are increasing sales—but, again, much faster outside the U.S. Furthermore, the forces of globalization lead to C-level executive positions to be represented by an ever more diverse complement of executives—NOT from the US.

The authors develop the idea that the Information and Computer Technology (ICT) advances are the latest of four General Purpose Technologies (GPT), which each had broad impacts and stimulated cascades of innovations. Whereas the prior GTPs—steam power, electricity, and the internal combustion engine—were concerned with dramatically increasing manufacturing productivity (steam power), enhancing place experience (electricity), and extending personal mobility via transportation advances (internal combustion engine), the latest GPT, both bridging and connecting distant places, as ICT overcomes the constraints and limitations of distance and geography, so far has destroyed more jobs than it has created.

Indicative of the implications of how ICT threatens to have very different consequences than the positive, job stimulating outcomes of the three earlier GPTs, is the authors’ observation:

“In the 21st century, technological change is both faster and more pervasive. While the steam engine, electric motor, and internal combustion engine were each impressive technologies, they were not subject to an ongoing level of continuous improvement anywhere near the pace seen in digital technologies. Already, computers are thousands of times more powerful than they were 30 years ago, and all evidence suggests that this pace will continue for at least another decade and probably more. . . . each successive doubling in power will increase the number of applications where it can affect work and employment. As a result, our skills and institutions will have to work harder and harder to keep up lest more and more of the labor force face technological unemployment.”

Race Against the Machine is a most reasoned, logical assessment of the causes of job losses and the future of jobs. Since jobs are the number one issue of the day, everyone with a leadership responsibility for and who is concerned about the future of the country’s economy needs to read this book.

Supported and illuminated by a series of powerful graphic displays of key changes and realigned relationships, Race Against the Machine is simultaneously sophisticated, yet accessible, balanced in treatment and not ideologically tilted. And, the authors anticipate readers’ “What do I do now?” question by offering a number of actionable policy recommendations. This vitally important book merits the widest of readership.