The Rabbit Hutch: A novel 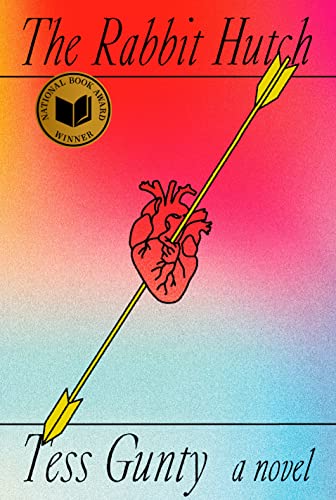 “the brilliance of Gunty’s writing and thinking expressed so originally and stunningly will keep most people turning every page in this novel of wild imagination, wisdom, and originality.”

Tess Gunty has achieved something remarkable with her debut novel. Along with notable other awards, the young writer was awarded the National Book Award for her first book, and rightly so. The Rabbit Hutch is a work of such abundance brilliantly crafted that it takes your breath away. Its multiple themes, quirky characters, crisp dialogue, and sad setting make it a unique read in a time when the world feels ever more dystopian. Erudite, probing, original, insightful, poignant, funny, and more, it is likely to be talked about well beyond book clubs for some time.

The story takes place in a dying outdated factory town in the Midwest populated by marginal, lonely, strange people trying to survive physically and emotionally. But for the main character, Blandine, survival goes beyond daily living. It’s a constant struggle for transcendence and meaning in a broken world.  It’s her expression of that struggle against the dysfunctions of modern life that make the book so stunning because of their articulation and depth.

The story’s plot line is secondary to the intellectual discourse that derives from Blandine’s take on myriad themes in her discussion with others. They range from capitalism and consumerism to social media, economics and ecology, sexual power, and beyond. Her erudite insights are expressed passionately, intellectually, and often comically. She is amazingly knowledgeable, but she is a fictional character. It is Gunty herself who brings us Blandine’s astute take on the world.

Told in vignettes that feel like a Robin William’s riff on life that could be stand-alone stories, we meet the town’s people and feel their pain. Among them are Blandine’s three male roommates who, like her, are products of the foster care system. They reside in a depressing apartment building called The Rabbit Hutch, as do most of the other characters in the story.

But Blandine, who takes inspiration from the medieval abbess Hilda von Bingen, is unique. A likely savant, she is a high school dropout in a never ending, intense search for ways to escape the malaise that surrounds her and that seems ubiquitous. Here she is in conversation with a wealthy former teacher with whom she had a brief fling: “We were not two people simply succumbing to inconvenient, taboo, totally hackneyed attraction. We were cogs in a superstructure of class and state and production and distribution and legalization and political pyramids and militias and exchange rates and national debts and fossil fuels and stuff. We were stuck in a web of material relations; actually, at the end of the day we were the answer to the question: Who are grand pianos for?”  (Her teacher has one).

Sometimes Gunty’s ideas are given to other characters to express. Here is one of them, a male, speaking to a woman. “You just act nice because you don’t have a personality. That’s not your problem. And it’s not your fault, it’s the fault of society. No one ever sked you to develop a personality because you always look so heavenly. Who can blame you for being nothing but nice? Who among us would have done the hard work of developing a personality if we weren’t forced to? But you should admit that there is nothing virtuous about niceness, especially niceness unaccompanied by a personality.”

Many of Blandine’s intellectual struggles, insightful analyses, and conversations stand as soliloquies and some of the vignettes will appear to be unnecessary, although each explores the human condition. Despite wanting to learn the plot’s denouement, some readers will not wish to plod on toward the end of the book as events and vignettes appear somewhat tedious. But the brilliance of Gunty’s writing and thinking expressed so originally and stunningly will keep most people turning every page in this novel of wild imagination, wisdom, and originality. It’s sure to capture readers who seek literary writing brilliantly crafted and totally rememberable.