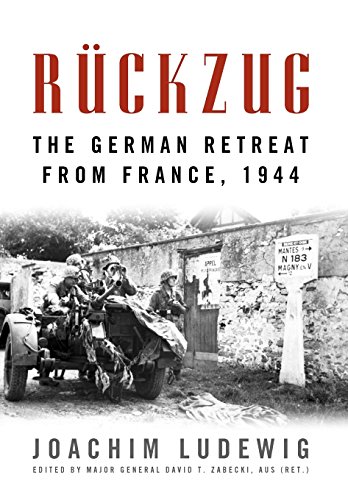 “. . . an excellent historical study of a course of events in need of explication.”

Between June 6 and the first week of September 1944, the western Allies bludgeoned the Wehrmacht and Waffen SS units tasked by Adolf Hitler to defend northwestern Europe.

The consequences of this battering were grievous for the fighting men of both sides. Yet because the Allies possessed not only brave, well trained, and aggressive soldiers, but also absolute control of the airspace above the battlefields and a very substantial preponderance of weapons and motorized vehicles, the German units engaged in the fighting suffered far greater losses, both literally and proportionally, than their Allied counterparts.

And when the Allied forces neutralized the German coastal defenses and emerged into the French countryside in early August, the Germans could muster but little in the way of a cohesive defensive front.

As the Germans drew nearer to their homeland, however, they managed to patch together a more formidable defensive line to temporarily blunt the Allied assault. The result was eight more months of warfare in western Europe, and the loss of many more thousands of human lives.

How did this turn of events come to pass?

That is the question asked and answered in Joachim Ludewig’s Rückzug: The German Retreat from France, 1944. The University Press of Kentucky has done a great service to those with a serious interest in the Second World War by publishing Ludewig’s work in English. The book is scrupulously researched, not only in the pertinent German military records, but also in the manifold sources that tell the official side of the Allied story. The result is an excellent historical study of a course of events in need of explication.

Author Ludewig identifies a dozen factors that enhanced the ability of the German armed forces to cobble together an effective defense in the autumn of 1944.

One important reason was that their leader became convinced that a successful German defensive/offensive strategy in the west would be much more likely to decide the war favorably for Germany than would a similar operation on the eastern front. Adolf Hitler told his military staff that the west was where “Germany’s Destiny will be decided.” He accordingly began to give more priority to the western theater, shifting newly trained units there instead of sending them to the eastern front.

In the middle of August 1944 Adolf Hitler, dissatisfied with the failure of his armies in France to forestall the Allied advance, dismissed the officer then occupying the position of theater commander-in-chief, and replaced him with Field Marshal Walter Model, a stern, tough soldier who did not shy away from battle.

On the eastern front Model had garnered a reputation as something of a miracle-worker in crises, and was acknowledged by German soldiers of all ranks as an especially gifted defensive specialist. In his new position he quickly developed a penchant for ignoring the Fuehrer’s often ridiculous and dangerous orders and taking the matter into his own hands, making decisions based upon sound military principles.

When Hitler recognized that Model’s performance had stabilized the German position, he allowed the Field Marshal to follow his own decisions.

The commanders of German Armies and Army Corps recognized very early that their ability to hold the port of Antwerp was essential to conducting a viable defense. By convincing their rankers of this, they were able to persuade them to stiffen their resolve and will to battle. In this the German military leaders were substantially aided when, on September 11, 1944, the first American troops stepped on German soil in the Eifel Mountains.

At nearly the same time, however, Field Marshall Model and his subordinate commanders were successful in stabilizing the German defenses along the Mosel and Rhone Rivers. This enabled the German Fifteenth and Nineteenth Armies to escape encirclement by Allied forces.

The 215,000 soldiers that these two armies managed to prevent being killed or captured by the Allies represented a substantial and effective force that German officers had thought completely lost.

Among many military historians and others it is an article of faith that a book authored by a German on the subject of the Second World War must be treated as a tissue of lies.

In the case of Joachim Ludewig’s work, however, this point of view will be difficult to sustain. This is so because it is the author’s conclusion that the German armed forces were able to consolidate their defensive line in September 1944 “only because the Allies were not prepared to exploit the . . . opportunities that arose during . . . August and September 1944.”

In effect, the Allies’ offensive had been too successful. The faster and further the Allies moved forward, the longer and more tenuous became their supply lines, and without an intact seaport in their hands, they could not rectify this problem expeditiously.

But while Mr. Ludewig identifies a failed logistic system as the heart the Allies’ problem, he also makes clear that the Allies had other problems that frustrated their hopes for an early victory. Among them was the indecisive and divisive Allied command system, brought about by the necessity for discussion and compromise between Dwight Eisenhower and Bernard Montgomery, which among other things undermined a decision that called for rapid capture of the port at Antwerp.

There were other, equally important factors at work. Whereas the Allied leadership had anticipated very slow progress across France against stout German defense, the speed and energy of the Allied advance convinced them that the enemy would be unable to establish a “viable and coherent defense.”

The Allies also deprived themselves of their ability to exploit the advantages of maneuver warfare when they chose a strategy of a broad offensive based on two offensive axes. In doing so, they played into the hands of an enemy with a great deal of experience with the concept of defense in depth. Tens of thousands of soldiers and civilians across Europe thus continued to suffer the effects of a conflict whose end might well have come much more quickly.