RÔTIS: Roasts for Every Day of the Week 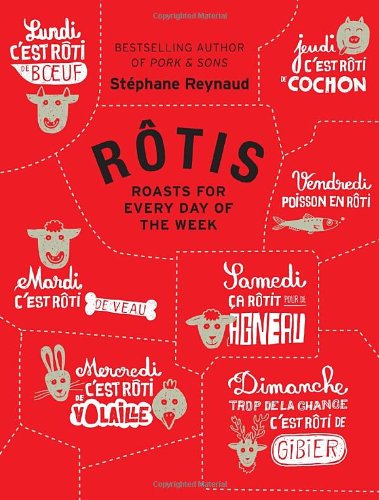 “RÔTIS is a book for armchair cooks that will send you into food reveries for hours and make you wish you had been born French. . . . a mouthwatering delight—even if you never make a single recipe.”

Like his previous books (Pork & Sons and French Feasts) Stéphane Reynaud’s latest cookbook is dedicated to authentic, family-style French food, or in this case, roasts.

Chef Reynaud’s Parisian suburban restaurant, Villa9trois, has earned him accolades in LeFooding (the anti-Michelin guide to French restaurants that celebrates traditional, homier cooking). As the grandson of a butcher from Ardeche, high in the Rhone Alps, Stéphane Reynaud cares deeply about preserving traditional French cuisine.

But make no mistake; like his other books, RÔTIS is a book for cookbook connoisseurs, not everyday home cooks and certainly not novice cooks. If you are looking for a cookbook that is genuinely French and you either don’t speak French or can’t schedule a trip to La Librairie Gourmande, the cookbook store on rue Monmartre in Paris, RÔTIS will certainly fill the bill.

RÔTIS is a book for armchair cooks that will send you into food reveries for hours and make you wish you had been born French.

Much of what makes this book so French is what makes it somewhat challenging to actually use. Chef Reynaud is not really writing this book for Americans (apart from adjusting oven temperatures and measurements). RÔTIS was first published in France by Marabout in 2008, and like most French cookbooks, the recipes are written more loosely than we Americans prefer as they assume a certain level of cooking knowledge (are the French born knowing how to cook?).

Take the Roast Veal, Plain and Simple, for example. It is essentially a recipe for braised veal fillet. First of all, what cut of meat is a veal fillet exactly? The picture shows a roast that looks like it has been rolled and tied, but the instructions say nothing about it. Nor does he tell you how much liquid should be in the casserole pan, just “add a little white wine from time to time.”

If you are experienced at braising meats you know what to do (maybe an inch of liquid), but if not, well, you know where this is going. The photo of the finished dish, however, looks absolutely scrumptious and would send anyone to bed dreaming of his/her next trip to France.

His recipe for simple roast chicken is equally head-scratching, calling for roasting the chicken at 350° F for one hour and then adding the potato wedges around the chicken and roasting for a further 30 minutes. I promise you, the potatoes will not be done in thirty minutes at 350°.

Moreover instructions for cooking a roast chicken should have guidelines that adjust for the size (his recipe calls for “1 large free-range chicken”—how many pounds is that you might legitimately wonder?).

There are several other “tells” that make this cookbook authentically French and are worth mentioning (if only to make you chuckle). There’s a recipe and photo for roast chicken stuffed with sliced truffles under the skin (which can be foraged in France don’t forget).

Then there’s the photo spread of a roast beef tenderloin that is cooked to three different degrees of doneness: very rare, or “blue,” rare and medium, all of which look pretty much the same which supports the French view that beef should always be eaten on the bloody side of rare and is why you always hear stories of Americans sending back their undercooked steaks in a Parisian restaurant (to the eternal chagrin of the French).

The premise behind this book is to get cooks thinking about serving roasts more often, suggesting that roasts are not as time-consuming as most cooks assume. We can all agree that there is nothing more comforting than a family dinner with a roast of some kind. But really, to suggest that they can be served any night of the week is a bit of a stretch.

Nevertheless, you have to give M. Reynaud credit for trying. On the title page of the book he entices you with five examples of recipes with their corresponding cooking times that range from a 5 minute “Rib roast with coarse salt” to 45 minutes for “Poached beef roast”.

Five minutes for a rib roast—that sounds doable on a weeknight, but will it be safe to eat? Turning to the recipe on page 22, you discover that it is not actually a roast, but pieces of rib eye that are seared and then roasted in the oven for five minutes (what a relief). In the meantime you are asked to bake potatoes (45 minutes), make a butter sauce and render marrow bones to serve along with the beef (15 minutes). Not exactly a five-minute meal.

All of that said, RÔTIS is a mouthwatering delight—even if you never make a single recipe. Stéphane Reynaud’s contribution to preserving French traditional cuisine is significant and this book, like his others, is a must-have for the cookbook connoisseur. For novices, though, the book should come with a warning: Don’t try this at home.