The Quintland Sisters: A Novel 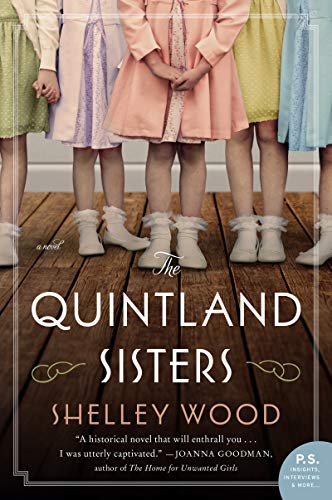 “The Quintland Sisters transports the reader to another time period . . . Wood is careful to place the quintuplets’ story into context and to demonstrate what frequently and repeatedly occurs in history: greed eventually overshadows even the best intentions.”

Shelley Wood’s fascinating and heartbreaking debut novel charts the first five years of the Dionne quintuplets’ sad and storied lives beginning with their births on May 28, 1934. Emma Trimpany, a fictional midwife-in-training and hopeful artist, narrates the girls’ tale through diary entries interspersed with letters and occasional newspaper articles trumpeting various highlights of the quintuplets’ early years.

Two months premature, the Dionne quintuplets arrive as a surprise to their parents, Oliva and Elzire, who already have five children. The Dionnes, a poor French-Canadian couple who live in rural Ontario, speak only French and have no electricity or running water in their farmhouse. The kitchen is repurposed as a nursery, and the care of the struggling and tiny babies is supervised by the local doctor, Dr. Dafoe. Word quickly spreads of the birth, and reporters and gawkers begin appearing at the Dionne home.

Almost immediately, a fissure develops between Oliva Dionne and Dr. Dafoe that only widens with time based on Dr. Dafoe’s belief that the Dionnes cannot properly care for the five babies in addition to the children they are already raising.

Four months after the quintuplets’ births, the girls become wards of the provincial Crown under the Dionne Quintuplets’ Guardianship Act 1935 and are moved to the Dafoe Hospital and Nursery across the road from the Dionne family homestead.

While the facility is significantly more sterile and the girls’ health is much improved upon their move, the quintuplets are constantly subjected to examinations and invasive studies monitoring every aspect of their lives and are required to adhere to a rigid schedule with little variation. Moreover, the Dionnes are only allowed to visit during certain specified times.

As interest in the quintuplets continues to increase, an outdoor playground with an observation area is built at the hospital to allow visitors access to the girls, and an entire cottage industry develops around “Quintland” as the facility is nicknamed. Over 6000 visitors arrive daily to view the quintuplets and buy souvenirs and other trinkets. Woods’ descriptions of Quintland’s observation area will cause readers to conjure up their previous visits to a zoo and to feel equal parts horror and fascination that such a place ever existed.

Emma is a wise choice to tell the quintuplets’ story. Yvonne, Annette, Cecile, Marie and Emilie are the first quintuplets to survive infancy and accordingly are a sensation from the very beginning. As Woods effectively conveys, everyone around the quintuplets greatly benefits from the girls while no one focuses on their well-being as children; they are treated like a commodity instead of like human beings. The inclusion of Emma’s fictional character to narrate the story and comment on the events adds some neutrality to the tale.

The girls neither meet nor play with anyone else their age and instead become part of a great social experiment that is documented in a book called Collected Studies on the Dionne Quintuplets by W. E. Blatz. Emma’s disgust with Dr. Blatz is evident: “Dr. Blatz and the other scientists write of them as you would a troop of monkeys-indeed, two of the scientists we’ve had in our midst were not ‘child psychologists,’ which is what we were led to believe, but zoologists.”

As the story progresses, Emma arrives at the realization that the entire situation is horrific for the girls and that they will never live normal lives. She frequently questions the girls’ participation in the studies, the movies, and the endorsements for various products.

The inclusion of photos would have added to the story significantly. However, upon finishing this novel, readers can comb the Internet and locate hundreds of photos of the girls and Quintland and follow the rest of their stories.

As only the best historical fiction can, The Quintland Sisters transports the reader to another time period and shines a light on an event that has an impact on its era and about which the actual details are little known. Wood is careful to place the quintuplets’ story into context and to demonstrate what frequently and repeatedly occurs in history: greed eventually overshadows even the best intentions.