A Question of Magic 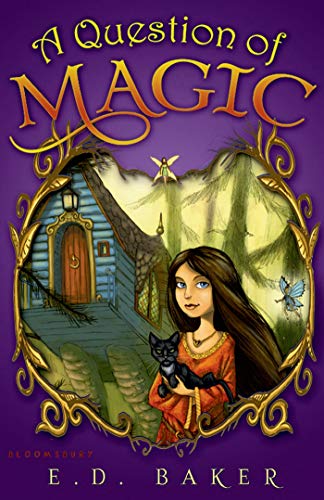 “. . . will no doubt get passed along from one preteen girl to many another.”

Known for her sprightly novels inspired by fairy tales (The Frog Princess series), E. D. Baker dips her pen into the strange Russian fairy tales of the bony old murderous Baba Yaga and brings forth a fresh, engaging tale brightened by humor and by an inquisitive, resourceful young protagonist.

Twelve-year-old Serafina receives a letter from a mysterious great aunt informing her of her intention to give the girl a life changing legacy. The unknown relative neglects to specify what she’s bequeathing or why she’s chosen Serafina instead of her two older sisters. As any spunky heroine would do, ’Fina soon sets off to claim her inheritance.

Upon arriving at the proposed site for receiving her inheritance, she encounters a bizarre environment: a cottage that can fly, a book that writes its own words, and a trunk full of squabbling skulls. Worst of all, there appears to be no way out.

Serafina quickly begins to doubt the value of this gift and longs to return home to her family and her dear Alek, whom she envisions marrying someday. Alas, reality has morphed: “Either she was losing her mind or all those people who had told her that things like magic and fairies weren’t real were actually wrong.”

Without a doubt, magic lives in this novel. Yet Ms. Baker eschews the darkest elements of the old Baba Yaga tales: the capricious hag who kidnaps children; the hut’s ominous fence made of human bones, topped by human skulls; the woman’s ravenous appetite for tender human flesh.

Nor does this author delineate a protagonist rejected by a hateful stepmother and her two heinous daughters. Instead A Question of Magic with its vaguely Eastern European medieval setting celebrates an unorthodox (for the era) heroine with plenty of curiosity, intelligence, and literacy, who dons the mantle of Baba Yaga and manages to help others rather than kill them.

As Baba Yaga, Serafina finds herself compelled to answer one, and only one, question from anyone who poses it. In precise detail, she is able to reveal the future, to solve crimes, or locate lost items—all in a voice that is not her own, but that of the wise Baba Yaga. Each time she responds, though, she grows a little older. Serafina cannot simply return home, as she does not know how to rid herself of this “gift” and must find a way to stop the aging before it’s too late.

The dramatic tension builds as Serafina inevitably grows lonelier, older, and with her increasing notoriety more vulnerable. She wonders if she’ll ever see her family and her beau again. If that sounds gloomy, fear not.

One of the novel’s major themes highlights the importance of helping others and helping oneself. The skulls, rather than threatening her become friendly and frequently comedic after Serafina cleans and polishes them. Her kindness to a talking cat results in her gaining crucial information; and after she befriends a giant, he returns to vanquish the enemies of her family and friends.

Her ability and willingness to teach a friend to read, in turn plays a surprising role in enabling her to pass the Baba Yaga role on to another.

A Question of Magic, with its likable heroine, its swiftly moving plot, and a romantic resolution will no doubt get passed along from one preteen girl to many another.