The Quest for the Cure: The Science and Stories Behind the Next Generation of Medicines 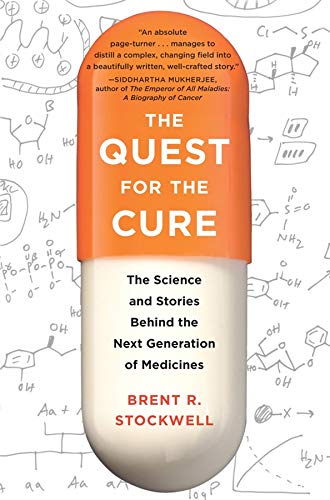 Proteins are essential to life. The interior of a cell is made up of thousands of different proteins, carrying out most of the work of a cell. A protein’s shape and structure determine its function. Each protein is composed of strings of amino acids stitched together through chemical bonds like beads on a string. Change one amino acid for another and disease could result.

The Quest for the Cure concerns the high stakes search by scientists to create the next generation of drugs. Drugs, like amino acids are composed of atoms combined as molecules, also called compounds. Most drugs have complementary shapes to specific proteins and act by binding to a protein and changing its function typically by inhibiting it, turning the protein off. Given a particular disease, the problem lies in finding the right kind of drug to interact with a particular kind of protein involved in a disease.

Drug molecules are characterized by shape, hydrophobicity (or lipophilisity: repels water or loves fat), electric charge, and hydrogen bonds. These characterizations predict how a drug will behave in the human body and how the drug should be handled in the lab. If a drug is too hydrophobic, it won’t dissolve into the bloodstream. If a drug is too hydrophilic it will dissolve but won’t cross from the bloodstream into cells to do its work.

An example of the complexity of molecules is provided by the instance of HCNO. HCNO is the chemical notation for the compound of Hydrogen-Carbon-Nitrogen-Oxygen. When HCNO is organized one way it becomes fulminic acid (an explosive), but when the molecules are organized another way, it becomes isocyanic acid (not explosive). Why is one explosive and the other not? The explanation is in the bonding. Isomers is the word used for molecules of the same formula but different bonding, in this case H-C-N-O versus H-N-C-O. How atoms bind is just as important as the selection of atoms, and there are many ways for atoms to bind.

The author’s thesis is that all the easy-to-find drugs have been found. The consequence is that the remaining problem may be intractable; the majority of proteins don’t interact with known drugs. Of the 20,000 drugs ever approved by the FDA, all of them together interact with just 2% of the proteins found in human cells. The remaining proteins—which in theory could be drugged and if so could modulate disease processes—have yet to be successfully targeted by any drug. As evidence, Mr. Stockwell identifies one effort at drug discovery by GlaxoSmithKlein, which tested 530,000 small molecule drugs against 61 targeted proteins. From this very large test, not one drug could be developed.

For a compound to become a drug it has to be stable, easy to purify, formulate, and manufacture but also nontoxic and properly distribute itself through the body after oral administration. Only then can its efficacy and safety be determined. There are several approaches to drug testing. One is to take a compound and see what it does to anything (open ended), versus selecting a problem protein as target and try as many compounds as possible (a narrower search) versus computationally processing the 3D structure of a protein to selectively design a drug to match the protein’s structure (narrower still). Note that the possible protein search space is on the order of 10e60, a difference 55 orders of magnitude larger than the GlaxoSmithKlein test. The question remains as to whether continued testing has any hope of success for future drug discovery.

Mr. Stockwell provides the history of small molecule drugs, which got its start at the turn of the 19th century in Germany by Justus von Liebig and Friedrich Wohler. Friedrich Wohler was the first to synthesize urea, an organic chemical from inorganic molecules. Before he did it, it was thought impossible. A precursor to Wohler’s discovery was the creation of the science of extraction methods, which must be used to purify (separate) molecules of a given type. That is, the techniques of identifying a single ingredient and then extracting and standardizing its concentration. The first purified natural compound was morphine, which was successfully separated from the poppy plant in 1817. Other drugs created early on by extraction and synthesis included heroin, morphine, and aspirin.

The next advance after determining the efficacy of a drug is to figure out how it works. The shift from making to understanding began in 1956 with the study of sickle-cell anemia by Vernor Ingram, the father of molecular medicine. One modern method to discover how a drug works is to add a radioactive tag and see where it goes, which was done to a morphine derivative molecule. Rats fed morphine had their brains ground up and studied to see if the radio-tag got there. Radio tagging method has its limitations. That a drug is detected in a part of the body doesn’t say anything about the quality of the binding of that drug to a protein. For determining the binding of morphine, a control test was performed with a competing drug noxolone, that inhibits morphine binding. From the results of tests like that, noxolone is now used to prevent morphine overdose. Studies of morphine also lead to the discovery of endorphins, which are naturally occurring pain-relieving receptor proteins.

Another line of study was of the compound adrenaline (also called epinephrine), which has two types of receptors, alpha and beta. The drug propanolol binds to beta sites and blocks epinephrine from turning those sites on. Drugs called beta-blockers are now used to prevent high blood pressure. Beta-blockers were first discovered by James Black in 1963, and lead to his winning the Nobel Prize in 1988.

Structure based drug design is done by selecting the protein first then searching for the drug that binds to it. Structure based drugs are modeled by computers in a process called “virtual screening.” While this method is limited by the availability and accuracy of the model, there have been successes. The first structured drug, captopril, is used to treat hypertension.

Structure based drug design was also successfully used to create drugs to counter AIDS. The discovery of the HIV virus lead to the Nobel Prize in 2008 for the scientists Barre-Sinoussi, Montagnier, and Gallo, and directly lead to drugs to be used against it. The first drug used against HIV was similar to HIV’s DNA and prevented the virus from replicating. This drug is effective but also toxic to normal cells. The second drug against HIV inhibits enzymes (an enzyme is a protein that increases the rate of chemical reactions) necessary for HIV to function. The drug HIV protease (protease is an enzyme that takes apart other proteins) was approved for use in 1995.

A significant portion of The Quest for the Cure covers the ongoing search for cancer drugs. Non-specific drugs that kill cancer do so by generating reactive molecules that can damage the DNA and proteins of both good and mutant genes. Normal cells are also injured and results in a weakened immune system, nausea, and hair loss for the patient. There is a fine line, the therapeutic window, between a therapeutic dose and extreme toxicity.

This reviewer was surprised to learn that sulfur-mustard gas, used as poison gas in World War I, was part of the foundation of the first anti-cancer drugs. Sulfur as well as nitrogen are nucleophiles, they attacks atoms, proteins and DNA. The study of sulfur and nitrogen-mustard after WWI lead to the use of cyclophosphamide, which has a large therapeutic window and is today a mainstay of cancer chemotherapy.

Cancer has targeted drugs too. Folic acid antagonists prevent folic acid synthesis in cells. Sidney Farber, in Boston’s Children’s Hospital, was the first to use methotrexate, an anti-folate drug to treat cancer in children in 1947. Use of methotrexate was very controversial at the time as the survival rate for cancer was very low while treatment was very painful. It was thought better to not treat the disease and just provide palliative care. His work lead to the well-known “Jimmy Fund” and the founding of the Dana-Farber Cancer Institute.

Angiogenesis is the stimulation of normal blood vessel growth, which is sometimes also done by cancerous tumors. One way to kill a tumor is to starve its blood supply. For this, a drug such as avastin or thalidomide is used, which acts as an interferon, something that triggers the body’s own defense mechanisms. Angiogenesis drugs have unwanted side effects by blocking the normal growth of the blood supply.

Although most tumors are not driven by hormones, some are. Tamoxifen antagonizes the binding of estrogen-to-estrogen receptors in breast cancer tumors but will also disrupt the normal functions of this hormone.

The majority of cancer drugs act by causing damage to DNA but some drugs act by preventing the synthesis of building blocks of DNA, while others act by attacking the protein’s transport pathways in cells known as microtubules. There have been advances by use of drug cocktails; many differently drug classes taken at the same time, each attacking by different mechanisms, with the intent of overwhelming cancers’ defenses. All drug classes target the rapid rate of cell division. Sadly all drug classes have harmful side effects. The search for a large therapeutic window is a “long running theme in the world of cancer treatments.”

The genome is the complete set of genes of an organism. The Human Genome Project began in 1990 with the goal of determining the 3 billion base sequences of the human genes. The effort was successfully completed in 2001. Having a whole genome permits a whole new level of drug analysis. One imagines a future where we have a complete computer model not just for every gene but for every protein and every small molecule combination so that analysis and prescreening for druggability can be done fully by computer. We are still a long way from this goal. The dark side of the genome project was the realization there is a huge number of drug targets that need to be searched. Of the 20,500 proteins in the human body only 200 to 400 are presently druggable.

Proteins can be grouped into families of ways drugs can act on a cell, and of the five families of proteins only approximately 3000 can be considered to be possibly druggable today. There is a relationship between drug complexity and affinity to protein binding. The more complex a drug is the less likely it will bind to a protein, and the simpler a drug is the easier to find a match binding with a protein but affinity is opposite to specificity. The greater likelihood a drug molecule will bind to one protein, the greater likelihood it will bind to many (and cause side-effects).

There are databases for small molecules, out of which drugs may be designed. In 2009 the database for small molecules held 970 million entries. To date there are 56,000 atomic resolution structures in the worldwide protein database. These are large numbers but still remain orders of magnitude smaller than 10e60, the protein search space. The immenseness of the search space prevents testing all small molecules on all proteins, unless massive improvements in parallelization and cost of testing can be found.

There’s a lot more. Brent R. Stockwell is a science writer of solid organizational and descriptive abilities so the non-expert can follow along and not get lost in the details. The Quest for the Cure is not only a compelling story, but also a useful reference, replete with footnotes, glossary, charts, diagrams, and computer renderings of proteins and protein structures.