The Queering of Corporate America: How Big Business Went from LGBTQ Adversary to Ally 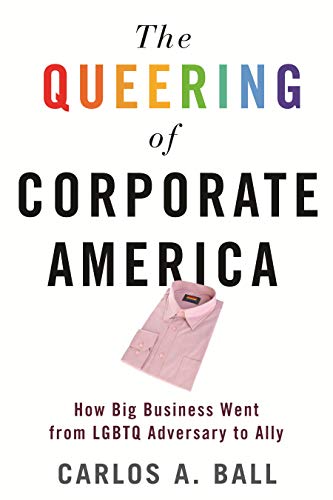 “The Queering of Corporate America vividly recounts one of the more important narratives in the history of LGBTQ+ people in America.”

In The Queering of Corporate America, distinguished legal scholar Carlos A. Ball offers a succinct, fascinating survey of how far LGBTQ+ people have come in terms of corporate employment protections and positive media coverage. After a brief history of American corporations, Ball moves chronologically from the first clashes between gay activists and corporations in the late 1960s, to corporate responses to the AIDS epidemic, and then to recognition of domestic partnerships. Later chapters discuss corporate advocacy and resistance to the recent anti-gay rights backlash.

Ball begins his chronicle of the changing relationship between big business and LGBTQ+ people with two events half a century apart. In 1968, Pacific Bell telephone company refused to print an ad for a gay and lesbian group in their Yellow Pages because they had a duty to protect customers from a “filthy phone book.” Fifty years later, Walmart successfully pressured the governor of Arkansas to veto an anti- gay rights bill. There in a nutshell is Ball’s narrative. Since 1968, many large corporations and media outlets have realized that it is foolish to offend potential customers. Moreover, they lose potential talent by rejecting LGBTQ+ people from their ranks of employees.

Of course, not all corporations have been gay-friendly, and Ball points out that the large companies have been much more proactive than mid- and small size businesses. Ball notes that corporations have been much more willing to support LGBTQ+ causes than take sides on the more controversial abortion issue. Surveys show that the majority of Americans are with them on gay rights even if politicians often are behind the curve.

Some companies did not become enlightened on their own. It took lawsuits, protests, and political pressure to make Pacific Bell see the error of its ways, but by the mid-1980s the company had a benevolent plan in place for the employees who were suffering from AIDS-related infections. Adolph Coors, the scion of Coors Beer was vocally anti-gay. When LGBTQ+ activists joined with unions and Latinx groups to boycott the beer, the company changed its hiring policies and even put a full page ad in a gay magazine. Other breweries soon followed suit.

The media offers a similar narrative. In the 1960s, gay people were the subject of sensationalistic, homophobic documentaries or negative stereotypes on comedy and drama series. Workers in the media had to remain closeted. A series of protests eventually led to our era with openly gay media personalities and gay characters on many television comedies and dramas.

Ball’s last chapter is the most provocative. There he discusses the relationship between the Supreme Court’s Citizens United decision and LGBTQ+ activism. Ball walks a fine line in arguing that while corporations should have the freedom to express themselves in public policy debates like LGBTQ+ rights, there is a danger to allowing them to unduly influence elections. Queer anti-capitalist progressives resist cooperation with corporations, but Ball argues that there is more to be gained by communication and cooperation on these issues.

Carlos A. Ball has a gift for writing in clear, readable prose free of academic jargon. The Queering of Corporate America vividly recounts one of the more important narratives in the history of LGBTQ+ people in America.