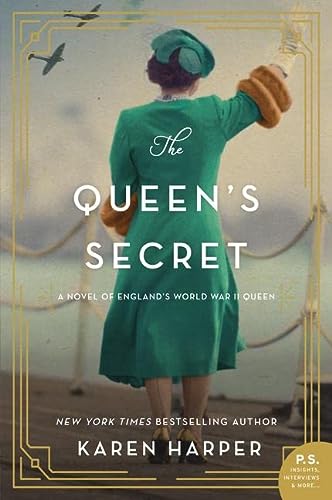 Americans have always been enraptured royal followers. In the absence of their own monarchy—the Kennedys perhaps come closest—they have been avid watchers of Great Britain’s royalty, never more so than when a scandal or secret exists. From Queen Victoria, if not Queen Elizabeth I, to the current heirs to the throne, loyal watchers simply can’t get enough of the House of Windsor now, in life or literature.

How timely that on the heels of Harry and Meghan’s bombshell resignation from royalty, Karen Harper’s latest historical novel, The Queen’s Secret, offers an intimate and engaging look at The Queen Mother, her family, her political power, and her secrets, carefully guarded while she worried constantly that they might be exposed.

It’s difficult to know which of the queen’s secrets, ranging from maternal issues to family relationships to political machinations, are true. This is, after all, historical fiction, not biography. But told in her own voice, the Queen Mum gives readers a fascinating glimpse into her royal rooms, her boudoir, her meetings with Winston Churchill, and her memories. It’s as if we are her best friend throughout WW II.

Much of the story is based on fact. Harper is a respected author who specializes in historical novels about real British women and her research is exemplary. There is no doubt, for example, that the queen was hugely influential during the war as important decisions were being made. She sat in at meetings with the king and Churchill regularly and was a recognized advisor to the king, whom she also supported in meaningful ways when he was exhausted and overwhelmed.

Thought to be demure, a wonderful helpmate and a perfect wife, as well as mother and queen, she was beloved by the British people. Her understated presence as she visited bombed neighborhoods, hospitals, and organizations, her insistence that she and the king remain in London during the worst of the war, and her egalitarian commitment to adhere as much as possible to rationing, made her an admirable example of the British commitment to themselves to “Keep calm and carry on.”

In fact, the plump, pleasing, and often self-doubting Queen Mum revealed by Karen Harper was a strong, determined woman with a steel will and astute political instincts. That’s why Hitler called her “the most dangerous woman in Europe.” Churchill admired and trusted her, Eisenhower respected her, and other powerful figures almost always agree with her.

Harper has captured all of this in her novel. While her descriptions and background information are compelling, it’s the queen’s voice we come to trust in the telling of the tale, because Harper relies on dialogue to bring us into the scene. At times the royal tone, stilted and aloof, can be annoying, but that is no doubt how these people talked, even among themselves. We might also wish that the queen didn’t agonize so redundantly about the biggest secret she is loathe to reveal, even to her husband, but her compulsion to revisit the most disturbing experience of her life makes its trauma understandable.

In a scene in which she comes perilously close to being “outed” about one aspect of her early life, the queen shares her emotional fragility and her regal carriage as she recalls the incident. “I forced another smile. . . . Rather than dig myself in deeper . . . I moved on smiling, chatting, waving. Again, midday though it was, I wished I had a drink, a strong mixed one, my can’t-do-without Dubonnet and gin. . . . And there it was lurking in the sunny beauty of this place, one of the several bombs in my past life I feared could yet explode.”

Yet she was ever the “Warrior Queen,” erect, chin up, gracefully purposeful, willfully determined to do the right thing, always. Harper captures all of this as she allows, indeed encourages, Queen Elizabeth to be proud of who she is, what she has achieved, and forgiving of her own foibles.

As the war concludes and the royal family emerges onto the terrace at Buckingham Palace to face adoring crowds, the queen glances sideways to find Churchill beaming, the king serious but elated, and her daughters smiling with excitement.

“After waving, waving, we stepped back inside together. Whatever the future held, we—I—would see it through.” Pure Queen Mum.