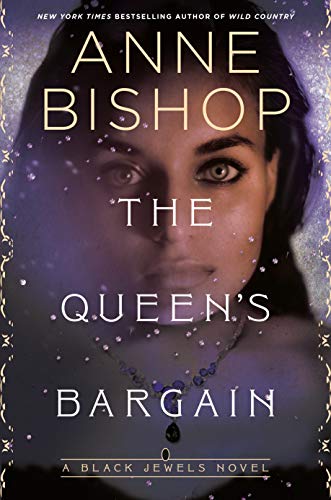 “New readers and seasoned veterans alike will enjoy this dive back into the land of talking unicorns, demon-dead queens, brooding sex, and the Blood politics that made the series a favorite for decades of dark fantasy readers.”

Decades after Jaenelle Angelline’s ascent to power, cleansing of the Blood, marriage to Daemon Sadi and eventual death, Anne Bishop reintroduces us to Kaeleer and all the people, and Blood politics, we hated leaving behind.

Both a reboot of the series and a continuation of the story, Bishop reestablishes basic familiar bonds, such as Daemon’s marriage to Surreal after Jaenelle’s death and the raising of their daughter, Jaenelle Saetien (who was briefly introduced in a previous book). Daemon’s brother, Lucivar, his wife Marian, and their children also play a prominent role, as does a new character, Lucivar’s adopted daughter, Jillian. Other fan favorites that make a cameo include black widow healer queen Karla (kiss kiss!) who still does not care for the “wiggle waggle,” the gray-jeweled warlord print Chaosti, and of course, Witch herself.

The Queen’s Bargain focuses mostly as a bridge book, introducing new readers to the series while arcing older readers into a new storyline. Two central plots weave together to form the narrative. In the first, Lucivar’s adopted daughter, Jillian, falls for Lord Dillon, a low-ranked aristo with a history of using and being used by women. Being from the long-lived Dea al Mon people, Jillion is much younger than Dillon suspects noting her linear age, and his targeting of her for his love spell and handfast plans go deeply awry when he crosses Lucivar, Daemon, and a pack of kindred Scelties (small dogs from Scelt, many of whom also wear jewels, work magic, and can speak telepathically).

Echoes of previous books are felt in this plot line, as Daemon, Surreal, and Lucivar uncover a web of abusive men and negligent queens, reminiscent of Dorothea’s reign. Although the tone of The Queen’s Bargain remains lighter and more hopeful than the original Black Jewels Trilogy, the ending foreshadows a future series in which the dark, sensual, and dangerous world may once again emerge.

The second plot line is one older fans will likely find more appealing. Daemon, having leashed himself too tightly in order to not frighten Surreal during their marriage, finds his sanity once again in jeopardy. Unwilling to see what is happening, Daemon must eventually call Witch to once again heal his body and mind. But dredging his dead wife back up from her peace and solitude brings back not only dangerous feelings but dangerous circumstances.

If Daemon cannot keep himself in check, all of the Realms will fall. But even with Daemon repaired, the territory and province queens are still ununited. Lucivar can take back his rightful place as the Warlord Prince of Askavi, and Witch can help keep Daemon’s sexual heat from dissolving him and the women around him, but war is coming, again, and all the Blood can do is brace for the change.

The Queen’s Bargain has all the hallmarks and touchstones fans will remember from the earlier books. Women are still the ultimate rulers of the Relam, and men are still thought of as emotional balls of hormones:

“’Men are darling creatures, but being so easily petted and aroused does make you vulnerable when you come in contact with unscrupulous women.’”

Bishop does an excellent job of creating villains and heroes from both genders, although her use of gender being tied to fundamental personality (men being more physically aggressive and protective, women being more catty and bitchy) feels a touch outdated. Homosexuality is still a fundamental aspect of the world, though unfortunately still on-page only for men. Although Karla’s character is further developed, her canon lesbianism or asexuality remains nebulous at best.

Despite some small hiccups that come more from a 20-year series pushing into a new decade, the adventure is still high, the characters still sensual and dark, and the world just as compelling as it was in Daughter of the Blood. New readers and seasoned veterans alike will enjoy this dive back into the land of talking unicorns, demon-dead queens, brooding sex, and the Blood politics that made the series a favorite for decades of dark fantasy readers.