The Queen of Swords (Golgotha) 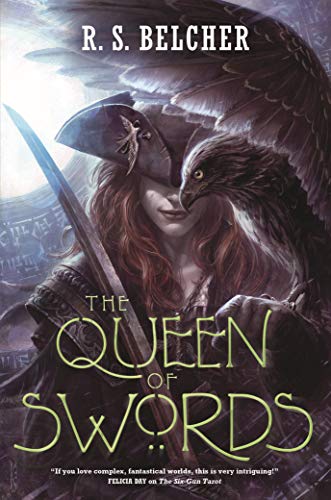 “Belcher’s writing is at its best when he stretches into hallucinogenic or mystical contexts, where reality and logic break down.”

This book—the third in Belcher’s Golgotha series, following The Six-Gun Tarot and The Shotgun Arcana—takes the narrative out of the frontier town of Golgotha and into two narrative strands, divided not quite equally between Charleston, South Carolina, in 1871, and western and northern Africa in 1721. The former follows Maude Stapleton, a character from earlier novels, as she journeys back home; the latter follows her ancestor, the pirate Anne Bonny, after the historical record loses sight of her, on a journey to the ruined city of Carcosa in northern Africa.

Although the name “Carcosa” suggests Robert W. Chambers and H. P. Lovecraft, Belcher’s cosmology is his own. This novel focuses on the somewhat muddy conflict between the Daughters of Lilith, a loose order of superhumanly dangerous women who draw their power from their namesake’s blood, and the deformed Sons of Typhon. Maude’s actions in a previous novel have made her daughter Constance a person of interest to both her fellow Daughters and the Sons.

Belcher has clearly done his research on multiple fronts. Maude’s mundane legal battle to regain control of her inheritance and her daughter hinges on the rapidly changing laws concerning women’s rights in the 19th century, and Anne’s journey through Africa eschews both evasive vagueness and the fallback of invented kingdoms, taking her instead to the historical lands of the Fon and the Yoruba, and observing the impact of the slave trade there.

Similarly, his characters span a racial gamut, and men play a decidedly secondary role in the tale, assisting or opposing the various Daughters who dominate the tale. This diversity, however, does run somewhat aground on the fact that the story is ultimately about Maude and Anne, both white women wind up impressing and surpassing the Daughters of color, often with their iconoclastic ways and instinctive talent. (The text also has an unfortunate habit of referring to Amadia as “the African Daughter,” while the others get referred to by their specific country of origin: the Guatemalan Daughter, the Chinese Daughter, and so on.)

On the level of its writing, the novel suffers a bit from Belcher’s approach to viewpoint. The semi-omniscient perspective drifts from character to character mid-scene, but without the sense of a grand tapestry that a truly effective omniscient voice can provide. This often lends a stilted feel to his exposition:

“Cline was twenty-four. His black hair fell to his shoulders in ringlets, parted on the side. He sported thick, stylish sideburns. Alter possessed a wiry, slender build with long legs. He stood a hair over six feet. His brown eyes were expressive and intelligent, and currently they were fixed on the striking woman sitting near the center of the passenger car.”

This thoroughly external description comes after a line that makes the reader privy to Cline’s internal thoughts, and afterward leads directly back to that closer perspective. Belcher’s constant shifting of position means the reader rarely gets a chance to really sink into the inner state of the character, as seen two pages later in that same scene:

“Maude’s mind drifted to Constance, her daughter, and to Martin, her father, and to all that lay ahead of her. That made her think of Mutt, of Golgotha, and what she was leaving behind. She was pulled from her thoughts by the young man’s eyes, as insistent to her as if he had tapped her on the shoulder and cleared his throat.”

For readers familiar with the previous two books, these fleeting references to Constance, Mutt, and “what she was leaving behind” are at least pointers to more context, but they skip off the surface of the moment. This approach significantly weakens the narrative at points of high emotional drama, as the reader has spent too much time at a distance from the characters to truly feel the impact of the closer perspective. Even Belcher’s detailed fight scenes, of which there are many, wind up having a faintly mechanical feel, as if more concerned with demonstrating the amazing skills of the Daughters than drawing the reader in.

Belcher’s writing is at its best when he stretches into hallucinogenic or mystical contexts, where reality and logic break down. There his occasional gift for poetic description integrates itself better with the surrounding text, and the dreamlike, symbolically fraught feeling comes through fully.

A denouement scene suggests there’s more to come in the Golgotha series, particularly for the Daughters of Lilith. Anne Bonny’s story may be done, but Maude Stapleton’s is not, whether that continues back in Golgotha or elsewhere in the world.