Queen Bey: A Celebration of the Power and Creativity of Beyoncé Knowles-Carter 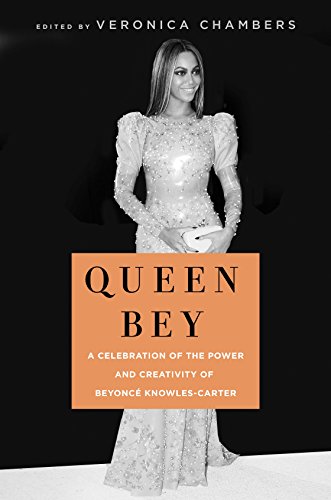 If you don’t know anything about Beyoncé Giselle Knowles-Carter you better bone up fast. Fortunately, Queen Bey offers a kind of cubist portrait of the womanly woman known around the world as Beyoncé who commands a stage, any stage, as brilliantly as Mick Jagger.

A singer, a dancer, a black feminist, a hip-hop artist, a sister, a daughter, a wife (to J-Z) and a mother of two children, she’s been called the “Black Queen,” the baddest chic” and an “Afro-futurist.”

Her fans call themselves the “Beyhive” and they’re ready to sting anyone who slanders her or her body of work. They’d also like to see her win a Grammy for Album of the Year, an award that has so far eluded her.

As the essays in Queen Bey show, Beyoncé is nearly all things to all people, or at least to almost all young black women. She’s Every Woman, Mother Earth and a Black Madonna.

Queen Bey offers 22 essays; 18 are by women, only four by men, including one long piece by Professor Michael Eric Dyson, who teaches at Georgetown University and who often reflects and riffs on blackness, African American music, and white America.

He isn’t the only academic represented in this book. Brittney Cooper teaches at Rutgers, Melissa Harris-Perry at Wake Forest, and Meredith Broussard at New York University. They all make solid contributions to the study of an icon, a legend, and an American idol.

But Queen Bey isn’t a collection of academic essays. Rather, reading this book feels not at all like sitting in a library and studying a text, but rather a lot like attending a sorority gathering when the sisters shout out their love, admiration, and respect for a polished performer who epitomizes the best of contemporary African American female culture and values.

There’s some gossip about Queen Bey’s husband, Shawn Corey Carter, known as J-Z—the Brooklyn-born rapper and multimillionaire—and his history of extra-marital affairs, though no one names anybody’s names. That’s okay. We can go to the tabloids if it’s dirt we want.

Still, there would have to be something juicy about “bad boy” J-Z or fans would feel cheated. Veronica Chambers, the editor of this book who is also an editor at the New York Times, has kept the conversation mostly clean and proper, though one writer describes Beyoncé “booty,” while another offers some of her provocation phrases, such as “suck on my balls.”

Queen Bey shows that women can be as ecstatic about a woman performer as they can be about a male performer, and maybe even more so. There’s no holding back in these pages.

Almost all of the contributors feel a personal connection to Beyoncé. Her songs and her life story are entwined with their lives and their life stories. Writing about her origins and evolution reminds them of their journeys.

Yes, there are over-the-top assertions. Dyson claims that Beyoncé does “what no one before her has done.” Really? Not Josephine Baker, Eartha Kitt, and Billie Holiday? Doesn’t she stand on the shoulders of performers who preceded her?

Another contributor to this volume likens Beyoncé to Muhammad Ali. Indeed, they’re both described as “The Greatest,” and, while many of the contributors rave about Beyoncé’s breakthrough album, Lemonade, there’s not enough said about her music and her lyrics.

Still, Queen Bey suggests that readers ought to listen to Beyoncé’s albums and watch her on screen in Dreamgirls, with its all African American cast, that traces the lives of three female soul singers who become stars.

It’s useful to learn that the word “love” appears more frequently than any other word in Beyoncé’s songs, though that’s not surprising. It's also useful to read that her father has managed her career, and that her mother has “styled” her.

Almost everything about Beyoncé, looks and sounds produced, stylized and “massaged,” to borrow a term from media maven, Marshal McLuhan, though several essays argue that she has authentic roots in the American South and in Latino culture.

Still, it’s curious that when Beyoncé and Jay-Z made their big music video they filmed it at the Louvre in Paris, not at a museum or art gallery in Egypt or in the Democratic Republic of the Congo.

Elodie Mailliet Storm, who works for Getty Images, writes that, “every aspect” of Beyoncé’s life “is documented.” Indeed, she has to keep her 118 million followers on Instagram entertained.

Queen Bey shows that African Americans crave their own “royalty,” their own black aristocrats, and that they’re willing to worship them in much the same way that white Americans have worshipped sex goddesses, matinee idols, and rock ’n’ roll stars: Marilyn Monroe, Marlon Brandon, and Elvis Presley, to name just a few.

In Beyoncé, African Americans have a big, bodacious black woman who supported Obama, gave money to Black Lives Matter, and expressed a sense of solidarity with the defiant quarterback, Colin Kaepernick. She even dressed up as a Black Panther.

One wonders, too, how much longer Beyoncé’s star will rise, and whether a younger performer—sexier, more beautiful, more outrageous and more liberated, too—will supplant her on the charts.

Meanwhile, now that she’s hot, listen to Lemonade and decide how good an album it really is. Or watch her videos on YouTube. You might be pleasantly surprised, even if you’re over 40.