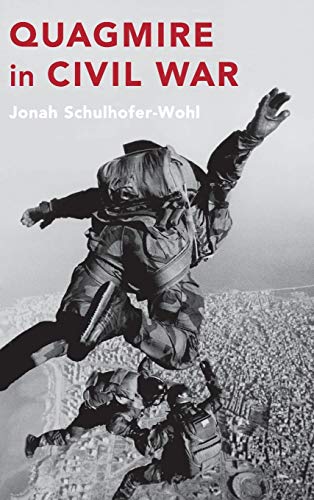 “For students of international conflict and strategic studies, Quagmire in Civil War offers not only a fascinating read on a highly relevant topic, but provides a model for how statistics, game theory, history, and political science can present a challenging topic.”

The use of the word quagmire by pundits, politicians, or generals during a conflict has come to have severe negative connotations. In particular, the word has been applied to nearly any application of American military power in the last 50 years, especially in Vietnam, Iraq, and Afghanistan. In addition, as the international community continues to grapple with seemingly intractable wars and near wars in the Middle East, Africa, and even eastern Ukraine, the notion of an armed conflict devolving into a quagmire that produces nothing by endless suffering and devastation is a constant issue for diplomats and generals to contend.

In this incredibly detailed study by Professor Schulhofer-Wohl, he examines what is truly meant by a quagmire by using history, political science, sociology, and a heavy combination of game theory and statistical analysis to provide a truly groundbreaking look at why some civil wars are resolved successfully, if not satisfactorily to all the combatants, and why others become a quagmire that may or may not require outside intervention to resolve.

“1. For at least one of the belligerents, continuing to fight cost more than the expected benefits; but

2. Withdrawing will increase rather than avert those net costs.”

This truly novel characterization, which on the surface seems somewhat contradictory, is then explored through the use of several case studies, particularly the Lebanese Civil War from 1975–1990, along with other conflicts in Chad and Yemen. Each of these case studies looks at the conflict from the viewpoint of all the involved parties, both within the country and international participants, as the author explores the entire set of strategic options and subsequent decision making by all the involved parties as the conflict progresses through various cycles of conflict, negotiation, and eventual conflict termination.

The author offers some fascinating insights into the different types of actual combat that occur during a civil war, in particular the higher intensity combat that results in the gain or loss of territory and resources, and the more prevalent lower intensity conflict waged to either force a decision by one of the other participants or simply maintain a party’s political or negotiation interests.

The author then provides the detailed modeling and statistical analysis performed on a data set of 140 conflicts from 1944–2005. The amount of data and the complexity of the game theory equations used is sometimes daunting to sort through, even for experienced students of strategic or political studies; however, the author does an exemplary job of using tables, charts, and graphs to highlight the findings in a form that is more digestible and understandable. The sheer amount of data pulled through the equations is impressive and mostly shows through actual conflict the validity of the author’s key theories.

These themes are definitely thought-provoking as they not only apply to the civil wars explored by the author, they can be considered applicable to any number of conflicts in the so-called gray or hybrid conflict zone that is becoming the new arena of international conflict. Although it does present an occasionally intimidating of data and modeling equations, most of these are in the appendices. For students of international conflict and strategic studies, Quagmire in Civil War offers not only a fascinating read on a highly relevant topic, but provides a model for how statistics, game theory, history, and political science can present a challenging topic.