Putin's Wars: From Chechnya to Ukraine 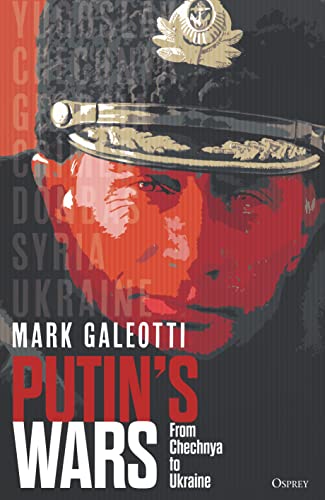 “provides a great deal of background and context to help the reader understand how Putin’s Russia came to believe it could impose its will on Ukraine in a lightning campaign, a mistaken notion that now threatens European security and the NATO alliance.”

Two important questions for European and American foreign policy continue to be: What are Vladimir Putin’s foreign policy and security desires, and especially since early 2022, what is he willing to do to achieve them? The discerning of Russia’s military capabilities and intentions are constantly under scrutiny, and this volume on Putin’s wars provides a timely and useful primer on understanding the modern Russian military and its wars.

It is important to know the history and background of Russia’s military since the collapse of communism to understand Putin’s worldview and subsequent actions. The author begins with an examination of the near disintegration of the once feared Soviet Red Army after 1991. The combination of the disastrous Afghanistan War, the collapse of the Warsaw Pact and the migration of thousands of Russian soldiers back to Russia, and the collapse of the Soviet Union left Russia militarily bankrupt, feeding traditional Russian insecurities and inferiorities vis-à-vis Western Europe. Even as the new Russian President Boris Yeltsin tries to manage this decline and maintain some semblance of military power, the morale and combat readiness of the military continues to collapse.

Moreover, the Russian Army quickly found themselves in a war that was remarkably similar to the current Russian intervention in Ukraine. In 1994, the breakaway Chechnya region became the first major conflict of the post-Soviet military, and it quickly became a debacle. The ill-trained and poorly led Russian forces quickly became bogged down in heavy urban combat, suffering significant losses before the application of massive amounts of indiscriminate Russian firepower brought about an unsatisfactory cease-fire that did not last long. The embarrassment of Chechnya was a significant factor in Yeltsin’s fading away as the relatively unknown Vladimir Putin rose to power promising to restore Russia’s greatness.

Putin’s first conflict, the Second Chechen War, ended hardly better than the first, with a barely controllable regime of Chechens in power that mostly, but not completely, followed Moscow’s will. But this conflict did provide the impetus for significant change within the Russian military, both in terms of new equipment, a resurrection of the prestige of the military, and a new doctrine for using armed force to advance Russia’s interests in its local sphere of interest.

Mark Galeotti provides a detailed look at these changes in organizations in Russia’s military in great detail, from the changes in strategic Military Districts to the significant changes in army maneuver units, going from the Soviet era division to an intermediate brigade structure, to the current battalion tactical group. Other chapters provide additional details on the Russian Navy, Air Force, and the continuing modernization of their strategic missile forces.

All of these changes started to make their effect known in the Russian military actions of the early 21st century. Beginning with the brief Russo-Georgian conflict in 2008, the author details how Putin became increasingly comfortable with exercising Russian military power, sometimes overtly, but more often hidden behind a screen of political disinformation, diplomatic maneuvering, and even state-sanctioned mercenary forces to hide the actions of Russian troops.

The successful Russian support of the breakaway regions of Eastern Ukraine and their intervention to save the Assad regime in Syria provided substantial combat experience to both soldiers and generals and appeared to validate the significant progress the Russian military had made since its nadir of the late 1990s.

However, the recent Russian invasion of Ukraine early in 2022 did not go as Putin intended, and now the Russian military is bogged down in a conflict with a determined and well-equipped foe. The surprisingly brittle Russian forces, lacking logistical staying power and facing an increasing manpower shortage, have only been saved from a more significant battlefield defeat by the same shortcomings in the Ukrainian military. Yet the greater motivation of the Ukrainians may provide the difference in the long-term, absent either the collapse of Western support for Ukraine or if Putin does the unthinkable and uses tactical nuclear weapons to provide a shock factor to force Ukraine to accept Russian territorial conquests.

Russia’s military is a contradiction, as is Vladimir Putin. While they present a strong front, they are not invincible. The author provides a great deal of background and context to help the reader understand how Putin’s Russia came to believe it could impose its will on Ukraine in a lightning campaign, a mistaken notion that now threatens European security and the NATO alliance. It is a complete one-volume briefing on the modern Russian military and its master.