Putin's Trolls: On the Frontlines of Russia's Information War Against the World 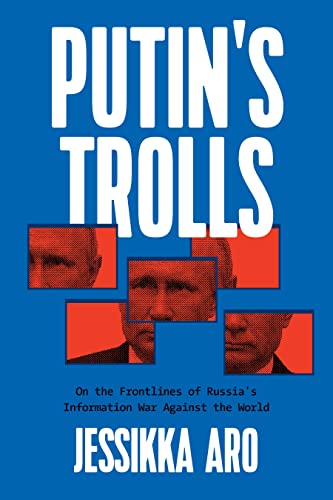 Putin’s Trolls is a terrifying analysis of evil—how Russian authorities have mobilized social media and other forms of hybrid warfare to exploit human frailties to foster Kremlin ambitions and soften resistance to Russian goals. The author is a Finnish journalist who left her beloved homeland in 2017 after more than two years of insults and threats by pro-Kremlin trolls ruined her personal and profession life in Finland.

The case studies Aro reports are the more terrifying because the tactics perfected by Putin’s trolls are readily copied and have been used by other governments and non-state actors as far from Russia as Myanmar, where they are deployed to whip up antagonism to the Rohingya minority.

The author, not yet 40 years old, has gone to Silicon Valley and to the US Congress to ask IT giants and politicians to fight back against the pandemic of troll manipulation. Authorities acknowledge that problems exist but do almost nothing to repress them. This, too, is another source of terror. To combat trolls is a complicated business that would take much study, time, and money—and jeopardize income streams for companies like Facebook.

The havoc wreaked by Putin’s trolls is the leitmotif of Aro’s book—illustrated by more than a dozen chapters detailing a variety of case studies. The first chapter summarizes the author’s early career as a journalist for Yleisradio, or Yle, the Finnish national broadcasting company. In 2014 at age 31 she began covering Putin’s Russia. But, she writes, “nothing had prepared me for the uncontrollable online spread of thousands of defamatory memes, threats, pictures, and videos—all about me!” Putin’s trolls, like Hitler’s propaganda machine, work to de-humanize the enemy. Once the foe is demonized, war is legitimate. Information warfare labors to show that Russia “can do as it pleases.”

Chapter 2 tells of the smear campaigns against a young Lithuanian diplomat, Renatas Juška, who lost his job as ambassador to Hungary when the police investigation into the illegal tapping of his phone came to a dead end. “He was targeted because he had always fought for democracy”—in Armenia, Azerbaijan, and Belarus, as well as Hungary.

Another chapter tells about Roman Burko, a Ukrainian journalist who lived in Crimea before the Russian annexation. He filmed the Russian soldiers appearing as “little green men” who began the takeover in 2014. When he posted excerpts on You Tube, his exposé was quickly seen by a million viewers. After masked Russian military bands threatened to kill him, Burko withdrew from Crimea and organized InformNapalm, a group of volunteer Ukrainian hackers determined to win the war and document criminal acts by Russians for reference to the International Criminal Court. Putin trolls have responded by claims that InformNapalm is linked to the Islamic State and financed by the United States.

Moscow State University, where Aro studied journalism, now hosts courses taught by military officers in methods of computer propaganda. They emphasize three tactics: the rotten herring (rubbing a nasty smell onto the target), the big lie (the bigger the better), and the 60–40 method (60% plausible facts and 40% fake).

Chapter 8 concerns two Norwegian journalists who based themselves in the northeastern corner of Norway close to Russia. They wanted to increase mutual understanding among peoples in the region—Russians, Norwegians, Finns, and Swedes. Their online news service Independent Barents Observer reported on oil and security issues. The nearby Murmansk naval base hosts Russia’s Northern Fleet, including submarines that sometimes visit Scandinavian waters. Russia’s largest gas and oil company, Rosneft, is also interested in the region, and would like to expand into Norway.

Reporting by the Barents Observer on Russia’s naval activities and those of Rosneft aroused the ire of Russia’s Federal Security Service (FSB). Aro reports that the FSB somehow induced Norwegian officials to stop government support for the Observer—with what blend of pressures or rewards is unknown. The Observer staff continues to file its reports on social media that, at least until recently, also reached Russia.

In early 2019, after Aro had returned to Finland and Ele, she got word from the US Embassy in Helsinki that she was one of ten women who would receive the International Women of Courage Award from the US State Department. She accepted and cancelled appointments in Brussels and elsewhere. Eight days before the event, the embassy phoned and said she would not be receiving the award. A tenth woman would take her place. What happened? No explanation was forthcoming, but some insiders said State had learned that Aro had tweeted a critical comment about President Trump. Mouthpieces for State said Aro was never definitively selected. After a Senate investigation, however, the State Department Inspector General confirmed the Trump explanation.

Later in 2019 Aro again testified to the US Congress about Russian cyber warfare. One week later, Special Counsel Robert Mueller delivered his report. It stated that Russia was interfering in US elections “as we sit here.” So Aro is not a lone voice unheard in the wilderness. For anyone who reads her lively book, her words should sound a piercing alarm.

In the 1920s–1930s between the two world wars, people witnessed the demise of empires and the rise of dictatorships. During the post-1945 Cold War the reigns of Josef Stalin and Mao Zedong showed that humanity faced not only dictatorships but totalitarian regimes striving to control not just politics but every facet of life.  Our 21st century witnesses how Vladimir Putin and Xi Jinping are taking us into a new era: Exploiting modern technologies, the Russian and Chinese leaders labor to extend the reach of their totalitarian dictatorships to shape every fact of life in other countries as well as their own.