In Pursuit of Fashion: The Sandy Schreier Collection 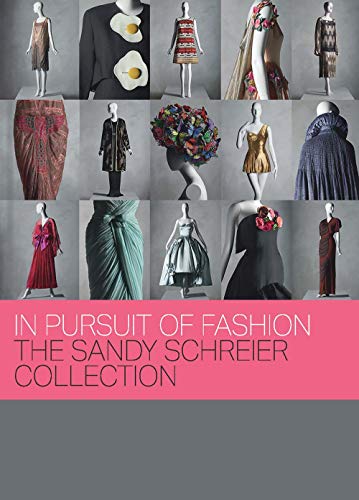 One of the first things that must be considered when reading In Pursuit of Fashion is that there will be repetition of information given that there are three contributing authors. Besides Ms. Schrier’s initial interest in fashion, each of the authors heavily stress the fact that this was a collection not to be worn or part of a wardrobe but to be collected in the same way that one might collect stamps or paintings. The authors also make a point of telling us that Ms. Schrier became more knowledgeable as she went along rather than collecting strictly from her gut instincts and only what she perceived as noteworthy in the beginning of her rather untraditional method of collecting.

The book serves as a catalog for Ms. Schrier’s collection which she has magnanimously and generously donated to the Metropolitan Museum of Art in New York City. The thrust of the collection is apparel from the 20th century but is also comprised of some drawings and a wealth of accessories. Yes, of course there will be the familiar names such as Dior, Fortuny, Balenciaga and Poiret etc.; and then there are designers who are not generally included in such a collection specifically Gilbert Adrian and Jacques Griffe, to serve as just hint as to who is part of this fashion cavalcade. The potential reader might also find a group of designers that they might be reading for the very first time and others that might not have never been considered museum-worthy. The inclusion of all these names speaks to the very personal element that was an integral part of how and why the collection was assembled.

Unquestionably, this is a book for the seasoned fashionphile as well as for those who may just be cutting their teeth in the world of fashion. There is much to be learned, not only about the designers, but as to how and why these pieces became part of this incredible amalgam of fashion; added to the information is who might have been their original owners and their relationships to each designer.

The Met owes Ms. Schrier their gratitude for expanding their purview of 20th century fashion by the inclusion of so many designers who might not have ever previously been considered as objects of desire for the museum.