In Pursuit of Peace in Israel and Palestine 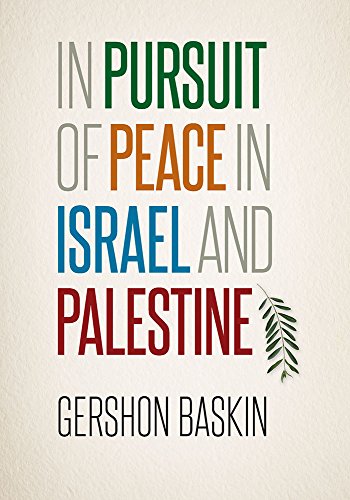 You don’t find many books like this one in our distempered times. Gershon Baskin, a secular Zionist, has spent most of his life trying to bring peace between Palestinians and Israelis, one party under occupation since 1948, the other the occupier.

In an untidy and unwieldy memoir, this intrepid man informs us that he will never abandon his self-chosen role as peace-maker. Grabbing us by the hand, Baskin takes us inside the shocking and almost unimaginable world of the struggles of Palestinians to have their own state and identity and Israel’s endless creativity at forbidding this. Baskin invites us along for the bumpy ride as he works the back-channels and forges pathways to peace through the bramble bushes, filled as they are with suspicious, wary, and dangerous eyes.

The gutsy Baskin wants to convince us that peace between Palestinians and Israelis (some Palestinians are, of course, citizens of the state of Israel) is possible. He doggedly pursues peace, befriending Palestinians wherever he can, founding The Israeli-Palestine: Creative Regional Initiatives, and seeking out opportunities to bring various leaders of both sides together to talk. Talk together: that’s the beating heart of this memoir. But this turns out to be an immensely difficult task. Baskin observes that from the outset of the creation of the state of Israel, separation was the name of the game.

Ehud Barak said it all: “Us here and them there.” Baskin illuminates the depths of separation of both sides. Few Israelis speak Arabic, fewer Arabs speak Hebrew. They don’t view others’ movies, read their literature, or even know anything about internal politics. They carry “enormous misconceptions about one another based on partial facts and little first-hand knowledge.”

One side proclaims: “God has given this land to us”—end of story. Both sides, Baskin laments, are afraid of each other. Now massive walls separate each from the other even more decisively. One can only weep.

Baskin seldom tires of telling us that Israel has the right to exist to anchor their Jewish identity. But he doesn’t just leave it at that. Palestinians ought to be mutually recognized to have a territorial expression of their identity—a piece of land they can call their own (even if it is only 22% of mandatory Palestine), on which they are the masters of their own destiny.

Baskin informs us that 67 years of Palestinian suffering has kept their memory of their “promised land” burning like hot coals in a winter fire. He also reminds us that Ben-Gurion forgot that the UN resolution 181 granted the establishment of two states. But many Israelis believe that pursuing peace is futile, perverse, and jeopardizes their safety.

The tragedy of this story, from Baskin’s view from the trenches, is relatively simple. He provides many examples of how the state of Israel blocked their citizens from talking to Palestinians. Indeed, Baskin tells sad stories about how both Israeli and Palestinian activists were treated harshly (sometimes killed) by their own people for opening the window to the other side. All of this is infinitely sad.

For his part, Baskin states: “I believe that people can be taught to live in peace—I have seen it with my own eyes and have experienced it first hand. But it seems clear to me that everyone wants to be understood.”

In Pursuit of Peace in Israel and Palestine may be a fine guidebook for peace activists who develop stamina and insight in the thick of action and organizing non-violent protests of different sort. They will identify emotionally with Baskin. They will learn acute lessons from his multitude of initiatives (and discussion of tragic events such as the collapse of the hopeful Oslo Accord of 1993 and tragic turn of some Palestinians in October 2000 to terrorist attacks as the road to perdition opened before everyone’s aghast eyes).

“The violence of the second intifada,” Baskin spits out through his teeth, “was horrendous. The peace process was dead, replaced by a culture of fear.”

Chapters 18 (“Making peace”) and 19 (“Lessons learned”) will be of interest to peace-makers. One basic lesson Baskin learned is that if peace is to be negotiated, then the parties to the peace must go it alone. A third-party mediator turns out to be less than helpful.

Baskin sets out 12 essential lessons he has learned over the years. Here is one important one: “Personal relationship building is important. It might sound a bit too obvious, but it musty nonetheless be stated explicitly—peace is built first and foremost from the personal relationships of individuals.”

Surrounded by death and destruction, Baskin admits that “It is very difficult to continue to believe in peace with all of the hatred and death surrounding us.” But he does. He believes it is possible. We all must believe peace and not war is possible.

Michael Welton’s most recent book is Unearthing Canada’s Hidden Past: A Short History of Adult Education (2013). He is the author of many books and articles on educational history, critical social theory, religious studies, and international affairs as well as an award-winning biography. He is also a regular contributor of articles on current and international affairs at CounterPunch.