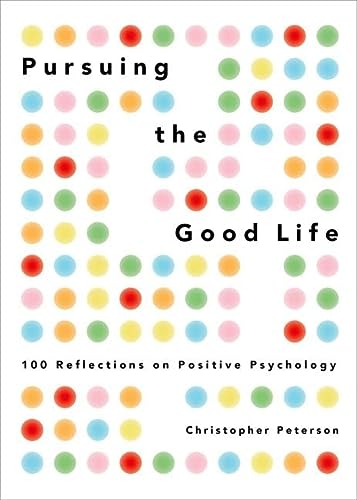 “Not merely an interesting and fun read, Pursuing the Good Life also offers some tips for achieving the same.”

When Bobby McFerrin sang the ditty “Don’t Worry, Be Happy” he may have been on to something.

A positive outlook on life coupled with the ability to take events and issues in stride may lead to a happier existence. So says Christopher Peterson, who has been a leading researcher in the field of positive psychology from its inception.

In Pursuing the Good Life: 100 Reflections on Positive Psychology, readers have a chance to climb inside his mind and view the subject from several different angles.

The book represents a collection of essays previously published as “The Good Life” blog in Psychology Today. These brief, humorous pieces cover every possible aspect of positive psychology, which Mr. Peterson defines as “an umbrella term for the scientific study of what makes life worth living.” The collection includes revised and updated versions as well as some new reflections.

Drawing upon many research studies, the author explores the meaning of happiness or the good life and how it is achieved.

As a start he paints the “positive psychology rainbow” as having more positive, rather than negative, feelings; satisfaction in life; identifying and using talents and strengths; engaging in activities; enjoying close relationships with family, neighbors, colleagues and friends; contributing to the social community; and having meaning and purpose.

The author admits the happiness determinants positive psychologists have identified can already be found in existing books and journals. And he also admits that none of the studies within positive psychology are new; however, he emphasizes that the discipline has the power to assemble several disparate topics and prompt examination of all of them. Call it synergism or collaboration, the author seeks to work in tandem with other scientists and researchers to explore how to achieve the good life.

As one might expect, the book takes a look at the correlation between wealth and happiness. Most people will agree that having money does not necessarily make a person happy. Citing two studies, one of which involved eating a chocolate bar after viewing a picture of money, Dr. Peterson examines the findings that wealthy people take less pleasure in the small things in life. Although he questions the accuracy of these studies, he surmises that those who are financially secure have become accustomed to the many small pleasures encountered in the course of a day.

Continuing on the money theme, Dr. Peterson refers to another study in which the brain activity of the participants was measured as they sipped wine. Those who were told the wine was expensive showed more activity—even though both the study and control groups imbibed the same wine.

Another essay makes a distinction between varying socioeconomic groups by illuminating the differences between pleasures, which are typically short lived, and comforts, which are taken for granted—until they are removed.

Readers should not get the impression the author has an issue with the wealthy. In fact, he cites an article that reported the results of a metaanalysis that found spending money on gifts for others or for charity led to general happiness. Enamored with this concept, Dr. Peterson suggests the country adopt some version of the Native American potlatch ceremony involving giving away one’s most valued possessions.

In general, the field of psychology examines issues on an individual level. With positive psychology, attention needs to be paid to the wider community and its institutions, which Dr. Peterson states is the “weak link.” Several of his essays address family matters, such as reading to your children, achieving some semblance of marital bliss and paternal participation in rearing children.

On a broader scope, he examines the workplace, academic institutions, athletics and physical locations and offers his thoughts on how these entities can foster a more positive outlook.

Readers may identify with some of the rants the author issues toward the end of the book and may even want to add some of their own. Dr. Peterson blusters about a number of subjects from “conspicuous consumption” and regional accents to the decline in letter writing and the ubiquity of technology, particularly email.

Dr. Peterson makes some predictions for the field, including an expansion of the practice into psychological clinics, schools, and businesses, the military, cafes, taverns, recreation centers, and, at the suggestion of a reader, Internet chat rooms. He believes critics will still assail positive psychology, but that the field should use this criticism as inspiration to dispel myths and arrive at individualized, effective interventions.

As the discipline of psychology in general has matured, the author sees positive psychology following a similar path and moving inward to neuroscience and outward to culture.

The key takeaway from the book addresses the issue of optimism. Dr. Peterson shuns the idea that expectations about the future are not distinctly correct or incorrect, rather the action we take in the present will influence the future.

“Optimism galvanizes activity, and optimism as I conceive it adds agency to affirmation. Positive thinking is powerful when it characterizes this third group of expectations,” he writes.

In other words, an optimistic person is healthier because he takes care of himself; an optimistic student gets good grades because she attends class; and an optimistic salesperson sells more because he works hard. “There are no guarantees, except that passivity will lead to failure in domains where activity is beneficial.”

Not merely an interesting and fun read, Pursuing the Good Life also offers some tips for achieving the same. The author’s blueprint includes some common sense, often overlooked advice.

And for skeptics of the concept, Dr. Peterson insists, “Positive psychology is fertile, but it is not fertilizer.”