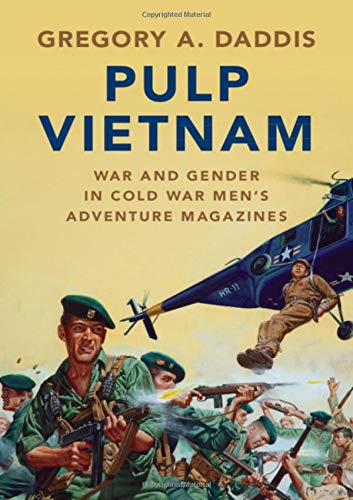 The Vietnam War is usually studied by military historians interested in set-piece battles or counterinsurgency plans. Some also focus on the humanitarian aspects, such as the terror brough on by massive bombing campaigns in North Vietnam or the psychological torture of the methods used by the NVA, Viet Cong, and CIA. Historian Gregory A. Daddis’s Pulp Vietnam views the war through a completely different lens—pulp adventure magazines.

Considered cheap, disposable, and louche, the post-World War II pulp magazines, especially the ones that fell under the rubric of “men’s adventure,” were chock full of thrilling stories (both fictional and nonfictional) about the exploits or rugged American men fighting behind enemy lines. Magazines like American Manhood, Sensation, and Male made mileage out of Cold War paranoia by focusing on gruesome battle tales set in Korea and Southeast Asia. By the time that President Lyndon Johnson committed major ground troops to South Vietnam in 1965, the pulps were already primed to give ideological support to the anti-Communist crusade.

Daddis’s main argument is that the pulps, which mixed violence with sex and racialism, greatly influenced the thinking and worldview of the average GI grunt in Vietnam. In the pulps, American soldiers were always depicted as ultra-virile and competent killers who never retreated and never faltered in the face of Asian Communists. As for women, they were the prizes to be gained for sexual exploitation by American combatants. This took on an especially racialized tone during the Vietnam War, when the pulps characterized Saigon as “a slant-eyed Sodom.”

Pulp Vietnam is a great contribution to the literature about the Vietnam War. Even more importantly, it takes seriously right-wing popular culture, which is woefully understudied in the case of the Vietnam War. After all, in the midst of rioting, anti-war demonstrations, and the growth of left-wing domestic terrorism, Warner Bros. produced The Green Berets (1968), a John Wayne action film that depicted the American involvement in Vietnam as right and just. This same attitude pervaded the pulps, which Daddis notes excoriated draft-dodgers and the New Left as “‘bums’ who sought to evade or buy their way out . . .” The pulps had nothing but hatred for such “men.”

While this is a terrific and well-researched study, Daddis’ contention that the pulps contributed in some small way to American war crimes in Vietnam is a bit of a stretch. War crimes occur in every war; no pulps need apply. Other than that, Pulp Vietnam sheds light on a fascinating aspect of Cold War culture and politics.