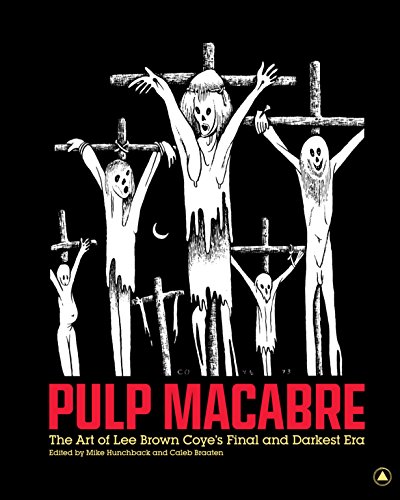 The Golden Age pulp magazine Weird Tales wasn’t a pulp that featured cowboys or detectives or men with rocket-packs on its covers. It had odd, scary things on its covers.

It featured lizard beings, demons, Edgar Allen Poe with a raven, otherworldly beasts with tentacles or a woman in a halter-top wearing a bat-mask. With a real bat on top of her head.

From 1945–1952 some of the magazine’s greatest covers and as well as some of the most memorable illustrations to ever appear in pulps were created by the artist Lee Brown Coye. Including the image of the woman in the bat mask.

But after this spectacular run the artist disappeared from the world of illustration. Over time his work caught the eye of new fans and they went looking to see what happened to Coye.

Featuring over 100 images, Pulp Macabre: The Art of Lee Brown Coye’s Final and Darkest Hour beautifully documents the amazing second act in the life of a great American artist.

Coye’s career started out strong. A self-taught artist his early works caught the eye of critics and museums. A 1938 watercolor that he created is still part of the permanent collection of The Metropolitan Museum of Art. A year later his work was part of an exhibition that featured such heavyweights as Edward Hopper.

The shifting tides of fashion and what was acceptable in the art world found Coye seeking work in the world of commercial illustration. In 1945 he began that string of classic covers for Weird Tales. His covers drew attention, both good and bad.

Then in the fifties America’s reading habits changed. Television and the arrival of the paperback book brought the pulp industry to its knees. With little call for his highly individualistic style, Coye left the industry and went on to sculpt, create jewelry, and continue his studies.

Then, a decade later, something weird started to happen. A small, dedicated group of fans began to rediscover the glory of pulps. They began to actively seek out artists and writers who were still living. They published what they found in fanzines and in letters to each other. Word began to spread that Coye was still active.

Some of these fans ventured into small press. They hired Coye to create work for dust jackets, fanzines and magazines. Once again his art graced stories by writers such as H. P. Lovecraft, H. G. Wells, Robert Bloch, C. L. Moore, and Manly Wade Wellman. His highly individualistic cover art being as popular in these anthologies as the stories themselves. His critical standing grew as other artists appreciated the way he could often convey so much in such a minimalist fashion.

Pulp Macabre features many of Coye’s most memorable work from this period.  It also showcases original, unused art as well as sketches he created based on various horror related themes.

There is a stark reality in Coye’s best work. It may occasionally look simple, but the feeling produced by what he has drawn digs deep into your soul. He doesn’t portray death in a detailed, fanciful or glossy way. He shows you death and horror that becomes personal.

For him death is not just a severed head. It is found inside the terrifying vacant stare found in the three members of the undead that populate his drawing Seraphino, Stragello, and Papa Bocitio.

His work often displays a theatrical bent. It can seemed staged. In The Red Room the patrons he shows us people who could be brothers to the doomed men and women who populate the bar in Eugene O’Neill’s The Iceman Cometh.

Despite the gloom and sorrow in so much of the work, Coye can display a wicked sense of humor. The cover art for this collection is taken from the magazine Whispers. The art shows a series of crosses supporting what initially looks to be ghostlike wraiths.

By putting a headband on the figure in the center he makes direct reference to the most famous crucifixion of all. If you look closely though that headband is actually holding hair in place. Now follow the line of the arms downward and it looks like the figure also has breasts. . . .

In contrast to the dour expression found on all the others seen hanging on those crosses, the person to the right of the central figure is smiling with an idiot’s delight. Naked and exposed, he clearly appear to be enjoying the torture.

Throughout this collection are a fair share of grotesque figures and destroyed bodies. In The Exiles Club a group of men seem to have no skin attached to their skulls.

For the classic Robert Bloch story Yours Truly, Jack the Ripper he shows a decapitated woman with her head and heart next to her naked figure. Underneath what has been removed is a long, curved blade. A gash lays across her chest where the heart once sat. Her left arm is folded cross her stomach and the index finger is pointing as if accusing someone who has just run out of the panel.

Coye does have a few reoccurring images and ideas. There is a crescent moon in many of his drawings. He also occasionally uses a series of spikes arranged in patterns that penetrate heads, bodies and animals. The crosses described above being a broken version of the motif. A master of both human and animal anatomy he gives us ugly, ugly rats and toads on spikes.

A true original, Coye’s art captures nothing so much as a deep love for the macabre and gruesome. The volume is wonderful, classic collection that could have just as well appeared in 1571 as today.  Fans who love The Walking Dead or German Expressionist woodcuts would be thrilled to discover Coye’s art.