The Psychopath Test: A Journey Through the Madness Industry 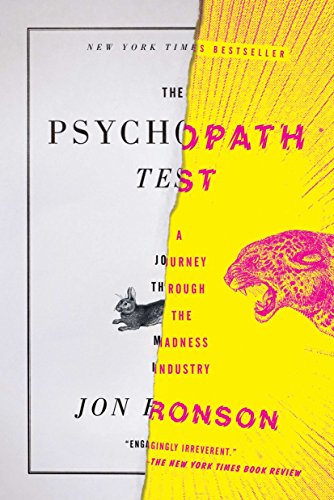 “The Psychopath Test looks at both the dark and light side of psychiatry, and Jon Ronson’s findings raise a few serious issues regarding questionable decisions and the exponential escalation of certain mental illness diagnoses.”

Jon Ronson (The Men Who Stare at Goats) is no stranger to the peculiar. Having already covered bizarre military experiments, KKK members and other extremists, Mr. Ronson has decided to dive head first into mental disorders, specifically psychopaths.

Working on the hypothesis that people in powerful positions such as politicians, CEOs, and military big cheeses, possess psychopathic tendencies, Mr. Ronson immerses himself in the world of madness. Since Mr. Ronson suffers from severe anxiety, it’s unclear—and perhaps a bit unwise—why a man, who’s convinced his wife is dead simply because she fails to answer the phone, would take on such a task.

Mr. Ronson’s quest for the psychopath began after being contacted by a neurologist named Deborah Talmi who, along with other upper-level academics, received a very puzzling book entitled Being or Nothingness. At first glance, the book appeared to be enshrouded in mystery and deep meaning; however, after extensive travel and investigation it was discovered that the book was not written by a mad genius, but simply by a crackpot.

During a tour of Ms. Talmi’s workplace, Mr. Ronson asked about a woman he saw named Essi Viding, a neurologist who studies psychopaths, and he was told the following story: Ms. Viding once showed a photo of a frightened face to one of her subjects and asked him to identify the emotion. The subject replied that although he couldn’t name the emotion, it was the face people exhibited just before he killed them.

Intrigued, Mr. Ronson decided to further research the characteristics of a psychopath and obtained a copy of the DSM-IV-TR, a collection of mental disorders published by the American Psychiatric Association. The DSM (Diagnostics and Statistical Manual) began as a 65-page booklet, grew to 494 pages by the time the DSM III was published, and currently stands at a hefty 943 pages. Due to the inability to reliably measure such traits as empathy, the disorder of “psychopath” was not included in the book, and Antisocial Personality Disorder is used instead. But during his romp through the book, Mr. Ronson does manage to diagnose himself with no less than 12 mental maladies.

Since the DSM does not include a list of psychopathic traits, Mr. Ronson used what the psychological industry considers the “gold standard” for diagnosis: The Hare PCL-R Checklist. Created by Bob Hare, the checklist denotes 20 potential psychopathic characteristics. Armed with the checklist and the completion of a three-day course taught by Bob Hare, Jon Ronson was ready.

On his all-madness-all-the-time tour, Mr. Ronson talked with various people, including Tony, a young man who was arrested for beating a man, then faked mental illness to avoid prison and ended up at Broadmoor, an institution for the criminally insane—where he has remained for the past 14 years.

Tony’s story shines an eerie light on the razor-thin line between sanity and madness. The harder Tony tries to prove he isn’t crazy, the more insane he appears.

In addition to those detained in asylums, Ronson pays a visit to others, such as Al Dunlap, a corporate CEO who callously plundered Sunbeam in staggering display of ruthlessness and insatiable greed; and Emmanuel “Toto” Constant, former leader of a Haitian death squad. After committing multiple, heinous murders—allegedly at the behest of the CIA—Constant avoided prison, but instead was sentenced to live with his mother in Queens!

Jon Ronson’s questions are perfectly posed, and he did an admirable job of remaining openminded and impartial, despite the difficult issues. On one occasion his impartiality did falter when one of his more maddening subjects, conspiracy theorist David Shayler, spewed such ridiculous, irrational nonsense about the North London bombings and 9/11 that it caused Mr. Ronson to react with the only appropriate response under the circumstances—telling Shayler to “fuck off.”

The Psychopath Test looks at both the dark and light side of psychiatry, and Jon Ronson’s findings raise a few serious issues regarding questionable decisions and the exponential escalation of certain mental illness diagnoses. Nonetheless, Mr. Ronson isn’t afraid to point the finger at himself and his chosen profession in which it’s commonplace to seek out the wingnuts in search of journalistic “gems.”

Written from a layman’s perspective, The Psychopath Test doesn’t get bogged down with the potentially dry mechanics of psychology, but does a thorough job explaining the necessary technicalities in a comprehensive and concise fashion. Though some of the content is a bit unsettling, Jon Ronson’s humorous and witty writing style, coupled with his self-deprecating and anxiety-riddled personality, help put the reader at ease.