Psychology’s Ghosts: The Crisis in the Profession and the Way Back 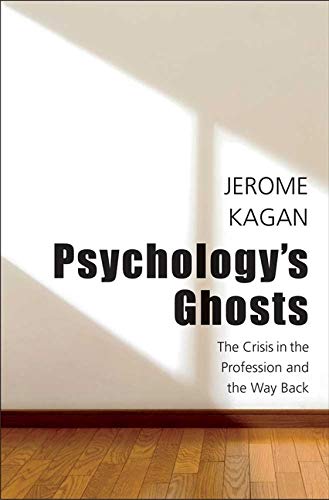 “Psychology’s Ghosts can be enjoyed by both experts and lay readers. For the latter, including persons suffering from some form of mental illness, the book represents a reliable and user friendly source of information about the present status of psychological and psychiatric research and clinical practice. For the expert it provides a compass for rethinking one’s own practice and research and for reorganizing this more consistently around the principle of beneficence.”

Jerome Kagan, well known for his work on innate temperament, has always upheld a holistic view about mental illness, paying equal attention to brain, mind, behavior, and personal narrative, hence also to culture and sociology in addition to biology and psychology.

It is this holistic approach he wants to drive home in his latest book, Psychology’s Ghosts, an appeal to his students and colleagues to recognize “the significance of the context in which individuals from different social classes and cultures try to cope,” rather than always seeking “to relate a single causal condition to the average value on one outcome measure.”

Psychology’s Ghosts offers a diagnosis of what has gone wrong in psychological research and psychiatric treatment and, in conclusion, it advances advice on the discipline’s future orientation.

According to Jerome Kagan, there are three main issues that need to be addressed regarding mental illness, and in all three cases it is necessary to pay more attention to the richness and detail of empirical evidence.

The first issue is that of “missing contexts,” also the title of the book’s first chapter. Context is about procedure in experiments and in treatment, but it is also about the social and cultural background of the individual. Paying more attention to context means looking out for the ways in which specific symptoms express themselves and are talked about.

It is these “properties-in-context,” rather than merely the symptoms on their own, that should be examined to understand emotional reactions or a patient’s response to a specific drug.

In graphic- manner, Jerome Kagan pleads for psychologists to:

“reflect before writing statements with the following form: ‘Individuals with the short allele of the serotonin transporter gene who experienced past stressors are at risk for developing an anxiety or depressive disorder,’ when the relation has not yet been demonstrated in both males and females from different class, ethnic and cultural groups with objective proof of the type and frequency of the early stressors . . . Instead, psychologists should compose sentences that have the following form: ‘Women with a European pedigree who inherited the short allele of the serotonin transporter, were sexually abused during childhood according to official records, grew up in an economically disadvantaged home, and are living alone in a large city are at risk of developing the symptoms of an anxiety or depressive disorder, based on information gathered on a face-to-face interview with a trained examiner who asked about current moods and memories of post-traumatic experience.”

A statistically minded psychologist might at this point object that such an approach risks reducing every observation to n-equals-1 type of statements thus compromising medical research, which is not primarily about exploring differences but about identifying commonalities; however, a more careful reading should alert such a reader to the nuanced argument of Dr. Kagan who is concerned instead with the pace of research in line with the requirements of the pharmaceutical industry and in accordance with the currently dominant scientific paradigm of biology and genetics. What is at issue, according to Dr. Kagan, is not the search as such for commonalities but rather the speed at which such are presumably discovered, hence also their frequent artificiality.

This momentum of modern day psychological research has been achieved with the help of verbal reports for establishing mental and emotional states such as subjective wellbeing.

The second chapter of Psychology’s Ghosts revisits the evidence from social psychology and sociology—in the meantime both extensive and conclusive—which demonstrates that such verbal reports, as elicited with the help of questionnaires, entail several response biases and are, therefore, more useful as measures of collective or group temperaments than they are as assessments of individual mental states.

Otherwise, it is not possible to explain why, for instance, Danish and North German Protestants are notoriously happier than Italian Catholics independently of their socioeconomic objective conditions. This finding is one that goes as far back as Almond and Verba’s seminal study on The Civic Culture from 1963.

The third and fourth chapters of Jerome Kagan’s book deal with mental illness and they make excellent reads—for the layperson as well. Dr. Kagan argues that one key problem of modern psychiatry is that it works with categories that are both too generic and too broad, and the forthcoming expansion of the Diagnostic and Statistical Manual of mental disorders (DSM-V) is unlikely to resolve these problems. Rather it runs the risk of accentuating them.

This is because DSM-V, like its predecessor DSM-IV, works under the assumption that it is possible to diagnose diseases using multi-item scales for classifying and assigning symptoms while paying little attention to the variation within single categories.

Thus, for instance, social anxiety disorder is used to label perfectionist individuals who are not depressed but report anxiety with strangers as well as those who are depressives and anxious with strangers but exhibit no drive toward perfectionism. This approach makes it easier to decide on medication as well as obtain reimbursement from insurance companies, but it is not always to the benefit of the patient.

When it comes to judging the significance for mental illness of inheritance, on the one hand, and personal history, on the other hand, psychiatrists will often confound features that predispose one toward specific symptoms with the incidence as such of those symptoms.

This is especially problematic in combination with the frequent lack of understanding for the cultural and historical contexts in which symptoms appear. This also applies to the profession’s tendency to ignore the rather obvious fact that some of our present day assumptions about what constitutes healthy psychological development cannot be generalized to all cultures and societies without partial, at least, adjustment.

This is, for instance, the case with the assumption that childhood stressors have always a negative influence or that personal autonomy is always a desirable quality. Our religiously clinging onto these assumptions also explains some of our “exaggerated reaction(s) to the experience of frustration and losses that are common human experiences.” According to Jerome Kagan, this is what accounts for the modern “epidemic of anxiety and depression among middle-class Americans under fifty.”

More generally, it is important to remember that “the probability that one particular symptom will emerge is a function of the combined probabilities for successive phases of the cascade, from genes to brain states, from brain states to feelings, from feelings to emotions and from emotions to actions.”

Since contrary to common sense combined probabilities are not cumulative in a clearcut additive manner, this also means that the chances for health are often much greater than the chances for ill-health, even among individuals with strong heritability burdens or an over-supply of childhood or social stressors.

Against this background and considering the many documented side effects of drug therapy, psychiatrists ought perhaps to be more cautious when administering drugs, especially in milder cases of depression or anxiety that by contrast have more to benefit from psychotherapy.

In the final chapter Dr. Kagan offers some ideas for possible and promising reforms in the field of psychology and psychiatry. Besides paying more attention to patterns “from different sources”—biological and behavioral data besides those provided through self-reporting—it is important to learn to take note of one’s own ethics and how these determine the preference for one or the other type of treatment.

This includes occasionally questioning whether our Western bias toward self-gratification in conjunction with our lack of trust and fear of betrayal are not undermining our understanding and search for happiness. Dr. Kagan’s advice: “Play your role with passion, even if you suspect that it is expendable, and allow the compassion you had as a child to balance the urge to always maximize the self.”

Psychology’s Ghosts can be enjoyed by both experts and lay readers. For the latter, including persons suffering from some form of mental illness, the book represents a reliable and user-friendly source of information about the present status of psychological and psychiatric research and clinical practice. For the expert it provides a compass for rethinking one’s own practice and research and for reorganizing this more consistently around the principle of beneficence.