Psychogeography. Words by Will Self 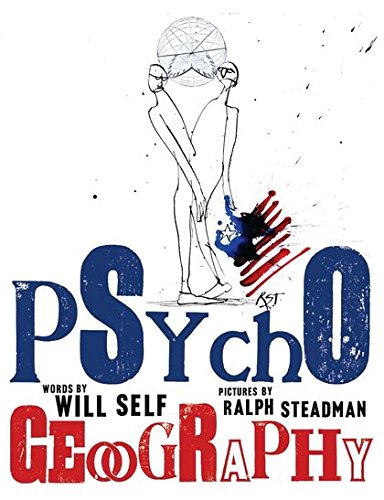 Will Self is an English novelist, columnist, and reviewer. He graduated from Oxford University, where he read philosophy, and has worked as a cartoonist as well as a journalist and author. He was a nominee for the Whitbread Prize for Best Novel in 2000 for How the Dead Live, and won the Bollinger Everyman Wodehouse Prize for Comic Writing in 2008 for The Butt. Ralph Steadman is a long time collaborator of Self’s who also had a long and fruitful working relationship with Hunter S. Thompson as well as creating works of his own. He has illustrated a number of well-known books including Alice in Wonderland for which he won the Francis Williams Book Illustration Award; I Leonardo for which he won the W. H. Smith Illustration Award; and Thompson’s Fear and Loathing in Las Vegas. He has been awarded an American Society of Illustrators Certificate of Merit and was voted Illustrator of the Year by the American Institute of Graphic Arts in 1979.

Self has a history of carousing and quite public displays of intoxication. He achieved a measure of infamy when, in the British general election campaign of 1997, he was evicted from John Major’s campaign plane for allegedly snorting heroin in the bathroom. Self has been drug free, other than caffeine and nicotine, since 1998, and now expends much of the energy he used to put into scoring drugs in taking long slow walks through the town and country. These interactions with his environment have led to a regular column in The Independent newspaper, which in turn has become Psychogeography, a funny, clever, and often irreverent exploration of the ways in which place shapes behavior and vice versa. Steadman’s illustrations support, expand upon, and sometimes even overshadow Self’s prose to give us a fascinating perspective of how we inhabit our world.

Beginning with the long prologue, “Walking to New York,” which chronicles the author’s journey on foot from south London to New York’s lower east side, Self details his opinion of what it is to be a psychogeographer, “a local historian with an attitude problem.” The idea is that he, and others of his ilk wander about looking carefully at, and interacting with the local, usually urban, environment. The broad and romantic purpose of his trip to New York is to become intimate with parts of the world usually only seen from the inside of a vehicle, or perhaps not seen because one is inside a vehicle. The actual purpose is to attend the launch of a writers’ residency and an interview. Self finds, to his dismay, that there are no safe routes that provide pedestrian access to either Heathrow or JFK. He finds that people do not understand the desire to walk in this day and age. Yet, as he makes his way from JFK to Manhattan, he finds himself enjoying a perspective that he has not previously seen. This new perspective is continued through Psychogeography as Self visits all manner of destinations from Rome to Spain to Singapore to Iowa to Brixton. He takes particular pleasure in examining the “interzones,” those areas where town and country, urban and rural, restricted and undomesticated, meet.

As he says, he’s “taken to long distance walking as a means of dissolving the mechanized matrix which compresses the space-time continuum, and decouples human from physical geography.” Self laments humankind’s separation from their environment and their increasing reliance on technology. That is not to say that he is a Luddite or a technophobe, he is more than happy to fly on a 757, watch TV, or go to the mall with the kids. Rather, he wants to re-engage with his environment. For Self this seems to involve specific goals for his walks and an incongruous involvement with modern culture. He always seems to be either attending some form of self-promotion, be it a book launch or a meeting, or visiting a tourist attraction. But for Self the journey is as important as the destination. Be it the Vatican; Barcelona’s La Sagrada Familia; or the Tabac Jacquard for duty free cigarettes, it is Self’s attraction to, and engagement with, what is fast becoming an isolated and forgotten world that makes Psychogeography such a compelling read. Self claims, “We live out our lives in cities that blot out natural features, while we resort to mechanical transportation to annihilate distances and gradients. Disorientation is a luxury that only we in the affluent West can truly afford.” Perhaps, in this post 9/11 world, it is the chance to escape from the rigors of social interaction, from surveillance, public expectation, luxury, and disorientation, which drives Will Self, and others, to abandon the tight strictures of urbanity and modernity and embrace the freedom of the psychogeographer.