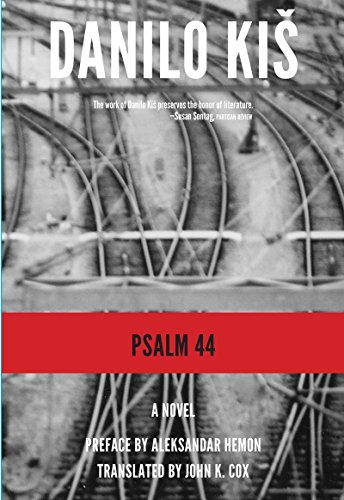 “. . . heroic yet ethically complex characters and a simple plot.”

When Danilo Kiš was nine years old his Jewish-Hungarian father was deported to Auschwitz and murdered there. Young Danilo stayed in Hungary with his Serbian Orthodox Christian mother until 1947 when they repatriated to her native Montenegro.

The Shoah is a theme and subject to which Mr. Kiš repeatedly returned as an adult poet, dramatist, and fiction writer; but his second novel (or perhaps novella considering its brevity), Psalm 44, is his only work that takes place in Auschwitz.

In Psalm 44 Mr. Kiš’ postmodern prose embellishes a framework of heroic yet ethically complex characters and a simple plot.

Our heroine is Marija, an 18-year-old prisoner and mother of a baby boy, Jan, whose father is Jacob, whom she refers to as her husband. Jacob is a Jewish-Polish physician and assistant to the camp’s Nazi medical officer Dr. Nietzsche, who is based on the infamous Joseph Mengele and uses camp prisoners as human guinea pigs. By naming the Mengele character after Friedrich Nietzsche Mr. Kiš attacks both Nazi science and the dualistic philosophy that underlies it.

Jacob uses his position to help fellow prisoners to the extent possible, but his predicament is ethically complex. Mr. Kiš does not seem troubled by an adult physician having sexual relations with a teenager, but prior to the repressed memory cases of the1980s there was little public awareness of the sexual abuse of minor children by adults—and this book was written two decades earlier.

The Red Army’s artillery is audible and the camp is about to be evacuated. Marija and her barracks-mate Zana are planning to escape before the evacuation with the help of Jacob and Max, the code name of the prisoners’ resistance leader whose identity is a secret.

Marija will take Jan with her but is prepared to suffocate him should his crying jeopardize their escape.

With the exception of flashbacks, the action of the novel takes place in Marija and Zana’s barrack in the hours before the escape attempt. The book’s stream of consciousness prose with its convoluted run-on sentences replicates Marija’s thought processes during those restless hours.

Mr. Kiš’ prose style evolved over his career, and this early book differs from his mature style.

Although Marija is a veteran prisoner who has been in Auschwitz for several years she seems to be in remarkably good health, though Mr. Kiš describes her survivor’s guilt and sense of wonder at her relative good fortune.

He does not tell us who babysits Jan in the daytime when Marija leaves her barrack to work in another part of the camp or how she acquires sufficient nutrition to breastfeed him.

Mr. Kiš describes the women prisoners as sleeping on straw with bed sheets, whereas Auschwitz prisoners in fact slept on their bunks’ bare wood boards without sheets. By adding bed linen he can have Marija determine when a dying bunk-mate will no longer need her sheet—which Marija cuts into diapers for Jan (and she dries with her own body heat) as well as sanitary pads for herself.

In the real (as opposed to Mr. Kiš’ fictional) Auschwitz most women prisoners stopped menstruating as a result of starvation.

After the escape [SPOILER ALERT!] Marija finds shelter in a location Mr. Kiš describes as 500 kilometers from Berlin. According to the translator in the original Serbo-Croatian Mr. Kiš wrote 500 kilometers northwest of Berlin, placing her in the middle of the North Sea. Five hundred kilometers southeast of Berlin would be in the vicinity of Kracow, Poland; perhaps Mr. Kiš was thinking southeast but absentmindedly wrote northwest.

In one of Marija’s flashbacks she is in Novi Sad in northeast Yugoslavia shortly after the German invasion when her parents explain her racial identity (three of her four grandparents are Jewish) to their 14-year-old daughter and why she can no longer travel by streetcars from which Jews are forbidden.

In another flashback six or seven months later Novi Sad’s Jews are rounded up, marched to the shore of the frozen Danube, and a selection is made separating those who are physically fit enough to work from those who are not.

The fit ones are to be deported to concentration camps but not before they witness the less fortunate ones being shot and mutilated so that their body parts can be pushed under the ice. Mr. Kiš witnessed such a massacre at age seven in the winter of 1942.

In a post-war epilogue, American visitors to Auschwitz are favorably contrasted with West German visitors whose behavior and reactions are inappropriate and show no signs of remorse or lessons learned.

Mr. Kiš wrote Psalm 44 in 1960 at age 25 in less than a month to meet the Association of Jewish Communities in Yugoslavia’s literary contest deadline, and its shortcomings are attributable to his inexperience and the speed of its composition.

He got the idea for Psalm 44 from a newspaper human interest story about a visit to Auschwitz by a married couple who were former prisoners and their child who was born in the camp.

That he was able to place his characters in ethically complex situations while maintaining his own moral and intellectual integrity in prose that rewards rereading is impressive; the judges agreed, and winning that contest launched his writing career.

Mr. Kiš was first introduced to Anglophone readers in the 1970s when his novel-like book of linked short stories A Tomb for Boris Davidovich was included in the series Writers from the Other Europe edited by Philip Roth.

Psalm 44 and The Attic—(also reviewed in New York Journal of Books), Mr. Kiš’ first novel the writing of which he interrupted to write Psalm 44—are now being published in English translation for the first time simultaneously with The Lute and the Scars (also reviewed in New York Journal of Books), a collection of Mr. Kiš’ short stories written in the early to mid-1980s. Mr. Kiš died of lung cancer at age 54 in 1989.

Psalm 44 is recommended to readers willing to overlook its factual flaws to find its compelling truths and to admirers of Mr. Kiš’ writing who want to read his early work.

This edition includes a preface by Aleksander Hemon and an afterword by translator John K. Cox—both of whose insights inform this review. Mr. Hemon’s insights are embedded in a strident rant about the distinction between general fiction and literature readers may prefer to skip.