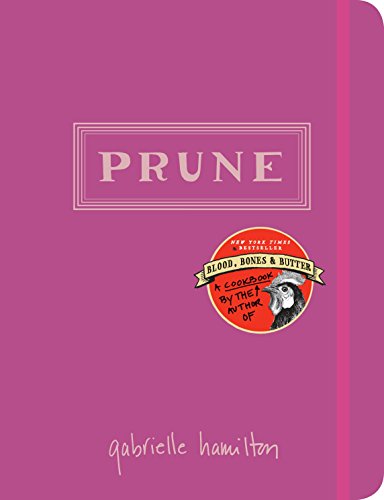 “Too bad there aren’t more recipes like this in Prune, because Gabrielle Hamilton has comfort food down cold: rich, rustic food made with copious amounts of good fat and salt.”

Restaurant cookbooks are notorious for being confidence busters for the home cook. With recipes that are too often not suitably adapted for the home kitchen, they are more like souvenir programs than reliable cookbooks.

Which may be the reason why Gabrielle Hamilton does not pretend to be writing a cookbook for home cooks. Prune, the cookbook based on recipes from her critically acclaimed New York restaurant, is addressed throughout to an imaginary line cook (and since none of us steps into our kitchen with the idea of pretending to be a line cook we can assume that she is not addressing us).

Instead, this is a restaurant cookbook that gives you a view of how the food is prepared in her kitchen not how you might prepare her food at home.  We know nothing of foreign sounding equipment like hotel pans, rondeau pots and sizzle plates. How, you will quickly wonder, is a home cook expected to execute these recipes?

Yet the temptation is too great. Recipes will be tried with varying degrees of success. This is after all the natural follow-up to Ms. Hamilton’s brilliant and edgy 2011 memoir, Blood Bones and Butter. We know her story and now we will want to know her food.

And her food is very inviting. As is the overall look of the cookbook itself. Designed to resemble a Moleskin journal with Gabrielle Hamilton’s own handwritten font in the margins to add additional commentary or instructions—just as one would write in one’s own cookbook—Prune is more like a scrapbook than a traditional cookbook. It’s homey, like her food, and draws us in immediately.

When perusing her recipes, careful readers of her memoir will smile in recognition. As with all of us, her recipes speak to her own experiences and heritage.

In a nod to the French side of her family, there are dishes like Duck Liver Garbure and Baked Mussels with Escargot Butter.  Having been married to an Italian and spent her summer vacations at his family home in Italy, there are plenty of Italian inspired dishes like Grilled Head-on Shrimp with Anchovy Butter, Bagna Cauda (a hot Italian dipping sauce for vegetables), and Whole Grilled Fish with Toasted Fennel Oil.

But what is perhaps most touching are the dishes that have a Greek or Mediterranean flavor. Do you remember in her memoir when she is a starving traveler in Europe and is nearly down to her last dollar, she swallows her pride and calls her sister’s friend, Iannis, in Greece who

“brought me to his apartment, and without even inquiring, set to work frying in olive oil two eggs with the darkest orange yolks I had ever seen, sprinkled them with coarse sea salt and cut a slice from a thick dusty loaf of bread. In a blender he mixed apple, honey, and milk and set this incredible, refreshing meal in front of me, beaming his huge smile. I was craving salt and starch. Eggs and bread.”

Later Iannis took her and others out to eat at a local restaurant and “simply ordered food for the table without even consulting a menu, and so set the standard for me for all time of excellent hospitality: Just take care of everything . . . I forever want to arrive somewhere hungry and thirsty and tired and to be taken care of as Iannis took care of us.”

It was Iannis who was the inspiration for the kind of cozy, comforting restaurant that became Prune. So to see dishes like Grilled Lamb Blade Chops served with Greek Salad or Braised Lamb Shoulder with Lemons, Tomatoes, and Cinnamon is quite heartwarming.

Which brings us to the actual execution of the recipes. There are several main dishes you would never even attempt at home, like Whole Roasted Rabbit or Roast Suckling Pig, but the Grilled Lamb Blade Chops is not one of them. Seems easy enough: brine the 6 chops overnight in a gallon of water with 2 cups of kosher salt and a few herbs. The instructions then say to remove the meat from the brine, “rinse and dry. Let chops rest at room temperature, 20 minutes [before grilling].”

Rinse for how long? Apparently for longer than a few seconds. My chops were as salty as could be and had to be tossed, leaving us with just the accompanying Greek Salad for dinner. It was not a happy meal.

Moving on to the vegetable sides, several were tried (they seemed less intimidating than the mains), but with mixed results. The Whole Roasted Cauliflower with Fried Capers and Brown Butter Bread Crumbs is a winning combination, but the time it took to cook the whole cauliflower head in the oven far exceeded the instructions (well over an hour when the recipe states 50 minutes). To be fair, you are given the option of blanching the head for 10 minutes before roasting in order to save time, but it was presented as an option not as a necessary step.

The dish was delicious, but the recipe needs tweaking. For home cooks who don’t care about dazzling guests or family by bringing a fully intact head of cauliflower to the table, break up the cauliflower into florets before roasting. It will cut the cooking time in half and will taste just as good.

The Soft-Cooked Zucchini with Green Onion and Poblanos is cooked with an entire stick of butter so you won’t be making it every night, but it was a welcome change after a summer of zucchini sautéed in olive oil and garlic. Serve it with some plain grilled meat or fish and you won’t feel guilty at all.

But the Braised Green Cabbage with Anchovies and Garlic was a real head scratcher. The instructions call for braising the cabbage in butter with the anchovies and garlic for up to an hour. By that time though, it seemed mushy and had taken on quite a funky taste and smell from the anchovies.

It was at this point that the plea went out to halt the recipe testing. So on the sly, one more recipe was tested just to prove there was something that even the most basic cook could master: Avocado Sandwich with Lemon Ricotta.

The ricotta is seasoned with lemon zest, spread on a piece of untoasted country bread then topped with sliced avocado, red pearl onions (I just used thinly sliced regular red onion), sliced cherry tomatoes and then sprinkled with toasted sesame seeds, finely diced preserved lemon (I omitted this because I didn’t have it), toasted poppy seeds, salt and a drizzle of olive oil. It was deeply satisfying. Humble ingredients made to feel special with the brightness of lemon and the toasty crunch of sesame and poppy seeds. Served with some chilled summer soup it would make a lovely lunch to serve to guests without breaking a sweat.

Too bad there aren’t more recipes like this in Prune, because Gabrielle Hamilton has comfort food down cold: rich, rustic food made with copious amounts of good fat and salt. But as she says to the imaginary line cook in Prune, “. . . remember we are trying, at every moment, to cook like we are at home, with the same leisures and idiosyncrasies.” Yet we all know of course that this is just an illusion. Restaurant cooking is never like home cooking. It’s why we spend money to go out to eat in the first place.