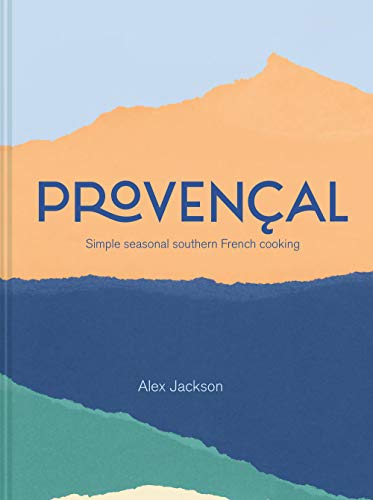 Provence has always held a special place in the hearts, minds, and kitchens of the English-speaking world. Interest in this sun-drenched corner of France peaked in the late 1980s with the publication of Peter Mayle’s

A Year in Provence. Then Italian food became fashionable and the cuisine of southern France all but disappeared from restaurants and home kitchens. In 2016, Englishman Alex Jackson went against the tide opening his restaurant Sardine in London to much acclaim. Provençal, published as Sardine in Britain, reflects the cooking of his restaurant.

Happily though, this is not a restaurant cookbook full of recipes that only a trained kitchen team can reproduce. There is no picture of Jackson on the cover or behind the scenes shot of his restaurant. Jackson likes simple, honest food that relies on good ingredients, not fancy equipment and tortured presentation. This shows in the book’s beautiful photography that while styled, presents the food in an uncomplicated way.

While the book’s primary focus is Provence, it ventures into the Languedoc, Corsica, Italy, Spain, and North Africa. In Jackson’s words, his food “acts as a prism for the sun-drenched cooking of the whole Mediterranean Sea” and it succeeds.

There is lots to love about this cookery book. It is divided into seasons, beginning with spring encouraging us to cook with fruits and vegetables that are at their peak. Each chapter contains a colored, playfully illustrated insert presenting La Grande Bouffe, the Big Feast, a celebratory menu for the time of year. Jackson lets the ingredients speak for themselves, resisting superfluous additions, that many chefs are fond of. A summer starter of mozzarella, peaches and ham requires only the ability to slice a peach and tear apart a soft cheese.

Most of the recipes follow this same pattern, uncomplicated and delicious, although some are more challenging. There are several recipes that require deep-frying, including one that has you frying pig’s ears, a dangerous task, although Jackson does warn you. Another recipe requires half a pig’s head and 4 ½ pounds of duck fat, and while one might be keen to try it, these ingredients may put off others.

The recipes are well laid out with both metric and imperial measures and only a few are longer than one page. The headnotes are interesting and useful, and Jackson’s instructions are clear and often fun: “drape your ham lovingly over the top,” and “Introduce the cooked girolles to the turnips and stir everything happily around.”

Jackson carefully explains how to avoid mush when making ratatouille while taking a good-natured swipe at the cartoon rat’s version. His grilled veal chop is enhanced with wild garlic butter, and the braised beef shin is improved with the addition of chestnuts.

The design of the book makes it easy to use, and it stays open at the selected page. The photographic bibliography is a great idea; you can trust a cook who acknowledges his sources.

Yet no book is perfect. Why there is a cherry recipe in autumn is unclear, the other cherry recipe is in summer where it belongs. Keep a seasonal cook book seasonal. And why did the publisher remove the foreword by Diana Henry? She is a well-known and well-loved cookery writer on both sides of the Atlantic. One would have liked to read her comments.