To Protect and Serve: How to Fix America’s Police 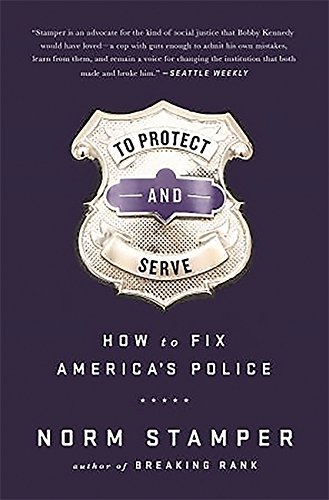 “If Americans understood the extent to which policing fails to supervise itself, fails to rid the system of corrupt or corrosive cops, they would likely be shocked.”

In To Protect and Serve: How to Fix America’s Police, Norm Stamper uses his experiences as a beat cop in San Diego and as the former chief of police in Seattle, to offer recommendations to improve the broken state of law enforcement in our nation. He addresses many important issues including police accountability, quotas, discrimination, militarization, the War on Drugs, and mental illness.

It is clear that Stamper truly cares about police work and wants to see improvements in the existing system. Throughout the book, he provides the reader with personal anecdotes from his experiences working in the field as well as relevant background information.

From the beginning, Stamper emphasizes how it is part of police culture for younger police officers to be instructed by senior officers to act like they own the streets. This way of thinking has contributed to increases in police misconduct as well as a decrease in accountability. Consequently, members of law enforcement have become increasingly more alienated from the citizens they set out to serve in the first place.

When discussing quotas, Stamper states that, "an officer trained in a system where people are reduced to numbers is very likely to dehumanize the people on his or her beat, and once that happens there's little hope for decency, mercy, or even something resembling objectivity." He gives examples of law enforcement excessively relying on fines and police officers erroneously being rewarded for exceeding quotas.

Furthermore, Stamper appropriately references the deep-rooted distrust in both the Ferguson and New York Police Departments. He discusses how Ferguson has historically engaged in aggressive policing tactics that have perpetuated stereotypes, discouraged police accountability, and eliminated community engagement.

In addition, he examines the legitimacy of the highly debated "stop and frisk" policies. In New York City, more than one million people have been subjected to stop and frisks over the past decade, with a weapon being found in less than one percent of those stops. He highlights how these policies have disproportionately affected young men of color.

Stamper also emphasizes some of the drawbacks associated with militarization and the use of SWAT teams. Approximately 80 percent of SWAT raids are conducted to serve a warrant for someone suspected of committing a crime—not to apprehend an escaped felon, active shooter, or hostage taker. He stresses how we must end military raids on the homes of low-level, nonviolent offenders.

Additionally, Stamper examines some of the problems associated with the War on Drugs. Since its inception, our nation has spent over $1.3 trillion dollars on this war and has become the world's largest jailer, disproportionately incarcerating people of color who have been convicted of a low-level drug offense. He makes several poignant recommendations to end the failed War on Drugs.

In order to repair the broken system, Stamper advocates for a model that would not only give the federal government a larger role in local policing, but would also incorporate community-based policing.

Although there are political, economic, and practical challenges associated with giving the federal government more power, he believes that the Department of Justice should set national standards for police conduct. He also stresses the importance of involving citizens in police operations, including fighting crime, creating policies, and overseeing police conduct. After all, the citizens know the community best.

Overall, To Protect and Serve: How to Fix America’s Police is very well written, combining Stamper’s personal experiences with historical and contextual information, and it could not have been published at a more appropriate time. This book should be recommended to current police officers, aspiring police officers, criminal justice students, and anyone interested in improving the existing state of law enforcement. Stamper is incredibly knowledgeable on the subject, and he has made it clear that unless we act, the condition of policing in the United States will not improve on its own.