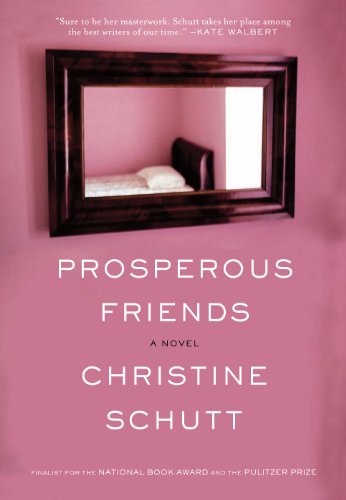 “Ms. Schutt has a stark, scientific eye and an artist’s voice.”

In Prosperous Friends, Christine Schutt’s crafting of three parts minimalism and one part stream-of-consciousness with rigorous lyricism of voice results in not so much a love story as a dissection of the possibility of love.

It is the tragicomedy of Ned and Isabel Bourne and their many paramours in a new millennium setting with an Edith Wharton telling—a little hotter on the sex, but well within the boundaries of literary marriages artistically rendered.

Writers fresh out of graduate school, the Bournes travel to London, Rome, New York, and Maine, searching for some assurance of their artistic promises, emotional connections and sexual fulfillments. They explore new countries and friendships that complicate and ultimately derail the couple with debauchery and politeness—Madame Bovary on The Age of Innocence.

The overall effect is an immersive ride with pulses of intimacy that nearly teeter on edge, but not quite, as the emotional and sexual distance for much of the novel holds the main characters, Ned and Isabel, as well as their lovers et al., at a safe distance.

Ms. Schutt has a stark, scientific eye and an artist’s voice.

Isabel wants to please her husband but is unable to meet his needs and choices in the bedroom. An abortion is the only choice they really seem to agree on. Ned encourages Isabel toward self-exploration, individualism, and experimentation but lacks the depths of what would truly support and please her. Self-involved, he seems to be ahead of Isabel at every turn. He hopes Isabel will meet the challenge, but ultimately he leaves Isabel in a fanciful state of presence and future.

She imagines herself something of an object and wonders what “real” work and family might bring her. She turns away from the experimentation that might release her and damn her. Always on edge, she seeks the security of the known, adopting a foundling mouse to replace her aborted child.

“On the screened porch, drinking rum, he [Ned] sat with Phoebe while his wife administered to [the] mouse . . . drowning what was already dead? He confessed it saddened him that he and Isabel were past caring about appearances.”

A common motif in the work is literary greats revisited, perhaps culminating best in the character, Fife, an Oscar Wilde adaptation and doppelganger to Isabel’s good girl tendencies. Fife also seems to be something of Ned’s henchman, pushing Isabel to drink, extramarital sex, calling her “cunt” when she cannot stomach the wilder sides.

If Ned and Isabel are two halves of the same writer, Fife is their id, which makes Fife painstakingly interesting as well as repellant. Fife might have had more of a presence but is relegated to Pan-type simplicity, serving as Isabel’s revenge on Ned and something of a punch line.

Of additional interest is the texture of the work. Longer and shorter sections create an enjoyable pacing, pulsated by sex sketches, moments when Ned and Isabel engage in physical and emotional rawness viewed through Isabel’s close-in neediness or Ned’s close-in disjointedness or a full on third-person pull out that keeps it all tidy.

Still, the brevity and texturing of these short sections is refreshing. It adds to the already known spaces of the characters as envisioned and so creates a reading experience that does not patronize or talk down. A few precursor lines here, a few lines of aftermath there, and the resulting effect is a simultaneously broad/specific study of the couple’s sex life, without most of the sex, outlining the symptoms plaguing their marriage also perhaps proffering a symbolic state of the craft they both share.

As it goes, theirs is a stalwart, impotent relationship. Ned wants to please. Isabel asks him to accept her pleasing him. Ned wants to experiment. Isabel wants a family and security. Ned seeks independence. Isabel needs to be needed. It all culminates in a Maine guest house belonging to Isabel’s geriatric lover artist and the geriatric lover artist’s wife, Dinah, the most grounded and balanced character in the book despite her prima donna, self-involved, enabler of a husband.

A note on the geriatric lover artist: Clive is many years Isabel’s senior, an exclamation point to Isabel’s search for security and validation from men who cannot possibly provide it, even a would be mentor-father, a man estranged from his own daughter. It would be something akin to soap operatic search for love except that it is written so very well.

The voice, the sheer lyricism and combined minimalism and poetry of it, makes Isabel’s lovelorn opera stage worthy. It is familiar with all its Woolfian notes for which Ms. Schutt’s work is known, but offers an interesting, heartfelt twist in the end.

Worth mentioning, too, is the bitterly funny moment when Isabel takes Clive’s “musty” penis into her mouth and realizes this just isn’t what she had in mind. Even in Isabel’s pathetic, self-denigrating state, her sassiness and potential for self-efficiency is worth rooting for and begins to earn the citation of Wollstonecraft, which might have otherwise been a far too ironically tidy.

A full on tryst through literary and artistic familiarity, the couple’s journey approximates an artistic marriage: a creative writing program, Europe, New York, something akin to an artist’s colony, an agent, unrequited search for happiness, childlessness, competitiveness. Young woman searching for a sexy mentor-daddy. Young man searching for younger sex. Sex, sex, sex gone awry, the “other” always so much more pleasing than the “have” until the other is the have and then all goes bust.

In the end, it is messy, but the mess is worth its landing. In all the disruption and difficulty that is Ned and Isabel’s story, there is a bloody heart. And it is not so sentimental.

Rae Bryant is a writer of essays, reviews, and short fiction, a collection of which, The Indefinite State of Imaginary Morals, was released in 2011. Her stories have appeared or are soon forthcoming in StoryQuarterly, McSweeney’s Internet Tendency, BLIP magazine, Gargoyle magazine, and Redivider among other publications and have been nominated for the Pen/Hemingway, Pen Emerging Writers, and Pushcart awards. Ms. Bryant is editor in chief of the literary and arts journal, The Doctor T. J. Eckleburg Review. She is also a voting member of National Book Critics Circle and a member of the Author’s Guild.