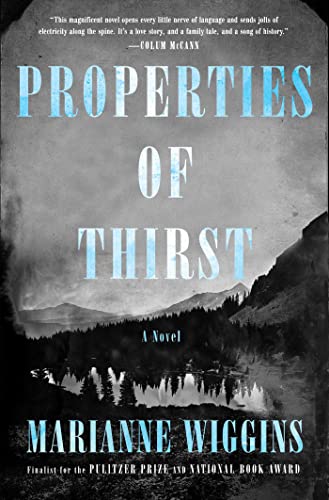 “Readers may never know if or how that near-death experience [Wiggins' stroke while writing] may have altered Wiggins’ concept of Properties of Thirst. Regardless, the literary world is fortunate that Wiggins managed to complete this amazing novel.”

Properties of Thirst is sprawling, rich, deep, passionate, beautiful, and as big as one of its key protagonists, the six-foot-plus California rancher Rocky Rhodes, and the vast mountain ranges he loves. Author Marianne Wiggins, a Pulitzer Prize and National Book Award finalist, knows how to craft an absorbing story with full-bodied characters and immersive descriptions.

Indeed, even at 544 pages, this novel is too thin for all the themes and subplots that it tries to tackle.

In the book’s backstory, Rocky and his twin sister, Cas, grow up in New York City in the late 19th century as the heirs to a mining-and-railroad fortune. Rejecting that heritage—except for the bits of his classical education involving “Thoreau and Emerson, that pair of old Transcendentalists, who’d lit Rocky’s fuse”—Rocky heads out to California. In the isolated Owens Valley desert between the Sierra Nevada and Inyo mountain ranges, he and his wife, a French-born doctor named Lou, build an idiosyncratic French-Spanish ranch. When Lou dies of polio, Cas moves into the ranch to help raise the couple’s three-year-old son and daughter, Stryker and Sunny, who are another set of twins.

The ranch and valley rely for their survival on what had been a seemingly endless, free flow of snowmelt water from the mountains. But as the Los Angeles Department of Water begins buying up the water rights and draining the large local lake to feed the growing Southern California city’s gargantuan thirst, Rocky becomes obsessed with fighting what he calls the Water boys via dynamite as well as lawsuits.

“This was where they used to come, filling their lungs with the lake vapors, as if the lake were breathing, as if they and it were sharing a single breath,” Rocky thinks. “It is never not a part of you.”

The main narrative opens with the attack on Pearl Harbor, where Stryker—who had run away to join the Navy—is stationed. Then the U.S. government decides to set up one of its infamous Japanese internment camps right in Rocky’s backyard, at a former apple orchard called Manzanar. Schiff, a young Jewish lawyer from the Interior Department, is sent to oversee the project. He soon finds himself drawn to Sunny, Rocky, and Cas, though they’re not especially welcoming.

The book is divided into 11 sections, each purporting to be about a different property of thirst (invented by Wiggins), such as recognition, memory, the thwarting of desire, reinvention, and evaporation.

The important thirst isn’t for water, however. It’s for connection. Schiff, Sunny, Cas, and Rocky too often fumble their connections with each other or with other characters, while longing for connection with those they miss, like Stryker, Lou, and the flourishing valley where Rocky first arrived.

“You can’t save what you don’t love,” the characters repeatedly tell themselves.

In its vivid sweep across the first half of the 20th century, Properties of Thirst travels from nine-year-old Sunny’s awe at discovering ocean fish, to the subtle anti-Semitism Schiff faces from the Owens Valley locals, to a minor character’s almost religious instinct for aiming his gun at a target, and much more.

Sunny recalls her initial glimpse of the Manzanar camp: “all the women, wives and mothers, women who had maintained homes, cared for families, shopped for groceries; cooked. Now they stood in their best shoes in the mud with dazed looks of displacement as if, in their distraction, they’d failed to bring along the thing they loved the most. Some of the men, she noted, tried an awkward air of nonchalance.”

The point of view varies primarily among Rocky, Cas, Sunny, Schiff, and Schiff’s Army aide, Jay Svevo, but is also interspersed with others, sometimes back and forth on the same page. The voices are all Dostoevskian in their run-on intensity, though they can have their quirks. Schiff frequently breaks up his sentences with parenthetical asides; Rocky favors lots of terse, one-line paragraphs, often beginning with an em-dash.

With so many pivotal characters ranging across so much territory, it’s no wonder Wiggins can’t follow every plot or theme to its fullest. For instance, early on, the water-obsessed Rocky demands, “Where’s the water coming from” for the detainees expected at Manzanar. “Ten thousand people—shitting, drinking, bathing, cooking.”

The book proceeds to describe the logistical nightmare of building the camp and the daily dreariness of living there. However, water is never again mentioned as a problem. Then the narrative skips ahead to the end of the war, and Manzanar is gone from sight.

There’s also a story behind the story: In 2016, when she was nearly finished with the book, Wiggins suffered a massive stroke. Gradually, her daughter Lara Porzak nursed her back to writing health, reading the manuscript aloud to her more than two dozen times.

Readers may never know if or how that near-death experience may have altered Wiggins’ concept of Properties of Thirst. Regardless, the literary world is fortunate that Wiggins managed to complete this amazing novel.