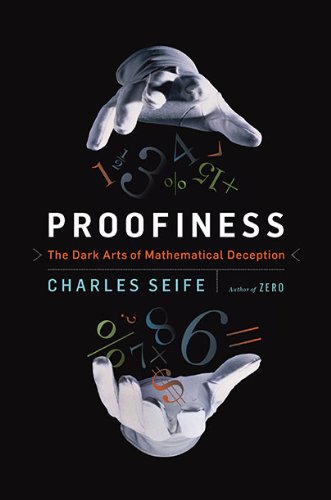 Don’t be fooled by this breezy and entertaining book; there are valuable lessons to be learned here. The title, Proofiness, refers to the various ways that assertions of fake numbers have been used to defend and promote falsehoods.

The lessons of proofiness can be learned from the following quote: “75% percent of all statistics are made up on the spot and 36% of readers will believe that statistic.” Of course that was made up, an example of proofiness. A statistic, whether proofy or not, is likely to believed by many because it is a number; and knowledge when expressed as numbers and stated with confidence is more likely to be believed than not.

Numbers are supposed to earn our trust by being tied to real measurements but some people will take this trust and apply it where it doesn’t belong. For example, when that something being measured is ill-defined, applied to items such as intelligence or pain. Or when the object claimed to being measured is just plain phony, but has a psychological aspect to it that attracts our wants and desires, such as “psychic powers,” the “impact of eyelashes,” or the “smoothness of cigarettes.”Like actors dressed in lab coats, a statistic, any statistic can be used to add an aura of truth to mask an imaginative tale meant to sell us something that we would not accept otherwise. Even scientists can be proofy, such as when one devised a formula without anything mathematically sensible behind it: the formula for happiness.

The theory is that if you want someone to believe something really, really stupid, just put a number on it.There are ways to detect the misuse of numbers used in statistics to sell products and illogic sold by advertisers, politicians, journalists, and scientists. The purpose of this book is that once you’ve learned the methods people use to turn numbers into falsehoods, those methods should be powerless against you.

Proofiness starts with Seife’s revisiting 1950s Wisconsin Senator Joe McCarthy’s claim that, “I have in my hand a list of 205 names of communists in the state department,” and then goes on to cover examples of proofiness made by advertisers, economists, and yes, even scientists. Seife also turns his critical eye toward newspapers and web based news reports, TV, and again, advertising.

Even if one weren’t intentionally trying to be proofy to sell you something, there can be multiple sources of honest errors when using numbers. There can be inherent error in measurement due to the limitations in the precision of the instrument. There can be errors from not understanding the limit of precision. Seife calls this kind of error disestimation, giving a number a precision it doesn’t deserve, with the example of a museum guide stating the age of a dinosaur in an exhibit is 100,000,038 years old because its age was determined to be 100,000,000 years old at the time it was dug up and brought to the museum, 38 years ago. Of course there can be fanciful numbers, numbers that are made up on the spot, such as the earlier statistic given on making up statistics.

Yet another method of proofiness is cherry picking or bias, that is, by picking numbers that support an argument and excluding the numbers that don’t, a tactic that global warming deniers tend to use.

Another proofy source of error is called fruit-packing, which is comparing apples to oranges as when advertisers claimed the Hummer H3 was more fuel efficient than the Hybrid Toyota Prius by using different lengths of ownership. And there can be apple polishing, making data look more attractive to exaggerate or minimize a specific point on a chart, pattern, or trend. One example given of apple polishing was that if one were to extend a line on a curve that represents the increase over the years of runner’s speeds for the 100-meter dash, one would then be able to (proofily) predict the year when someone would be fast enough to break the sound barrier by running. One more way to misuse numbers is in confusing correlation, that is, of cause and effect. Seife invents a new word based on casuistry or false reasoning. This new word is causuistry—a faulty argument based on believing (or intending to cause belief in) a causal relationship when none exists.

Seife provides an excellent chapter on proofiness in estimation of risks and uses NASA as a prime example of overt proofiness. Changes in wording, or how you state the risk can make an insignificant risk seem dangerous and a huge risk seem acceptable. Seife states that “we are prey to risk mismanagement.” NASA blatantly disregarded risks when it came to its manned mission to the moon. Seife claims that “It was in NASA’s interest to disregard risks to keep the project alive,” reasoning that “if Congress got wind of just how risky NASA’s human spaceflight projects were, the programs could well have been canceled.” In the case of the manned moon mission, disregarding risks worked, but eventually the odds caught up with NASA on the 25th flight of the space shuttle.

The problem with simply changing words to change risk management is that it’s how our brains work: we can’t detect when someone is lying. Because there is no way to tell when someone is lying, there’s money to be made in intentionally underestimating risks. When gain is separated from risk people will tend to underestimate that risk to sell to others. Seife explains the recent financial meltdown in understandable terms of risk mismanagement. “Just as risk can be hidden or moved from place to place, it can be divvied up and sold.” Insurance companies can be dumping grounds for risk, and that’s partially what caused the financial bubble. Investors proofily exchanged risky mortgages for less risky insurance. Bad risks were passed around like “hot potatoes” and ended up as “toxic assets” at prime insurer AIG.

In promoting risk mismanagement people are lying in order to make themselves rich, to gain and hold power, to get their own way whether it is in banking, politics, journalism or in science, or in undermining the press, or by denying citizens the vote, or in other proofy methods that undermine democracy.

Polls are a leading source of proofiness in modern society. Poll results are entirely under the control of the poll sponsor Polls, created by the news media enable the media to manufacture news. The reporting of poll results become pseudo-events, nonsense dressed up in the guise of fact. The unproofy theory behind polling is that a small sample represents a larger whole, but random samples aren’t necessarily random and then become subject to statistical error that is measuring something that is not what you thought it was, and to systemic error or bias because people will tend to lie whether or not there is value in lying.

Polls can be easily manipulated by wording for example the choice of using “pro-life” or “anti-abortion” in a sample question. Bias may also be caused by those who are polled, in actively seeking out or avoiding the pollster. The “margin of error” pollsters use to defend their polls can have the sin of misestimation in disregarding the possibility of systemic error. In hiding the sources of error Siefe claims that the news media acts with “absolute malice,” a legal term linked to a news organization that publishes something known to be false. When it comes to polls, the news media as a whole exhibits reckless disregard for the truth.

In a chapter amusingly titled “Electile Dysfunction,” Seife covers Al Franken’s contested senate election in Minnesota in 2008 and goes into great detail on the agony and the proofiness the ballot judges and contestant’s lawyers descended to in the concern over every single ballot in the recount in a very close election. In the effort of recounting ballots, there was one ballot that was both a write-in vote for Lizard People but also had the oval blackened next to Al Franken. What is a responsible recounter to do? Seife doesn’t give the story away, but dramatizes this chapter giving an election backstory in the style of a police thriller or movie cliffhanger, making the reading journey more fun than the final destination.

Seife covers proofiness in the Gore versus Bush election of 2000 in another winding narrative path and along the way explains the long history of gerrymandering, where districts to this very day may be legally reorganized to allow electors to cherry-pick their voters to remain in office even as the number of favorable voters diminish. Seife also covers proofiness in the 2000 census in the political fight between sampling (mathematically good but politically bad) and imputation (both politically and mathematically good but indistinguishable from sampling), which has caused a legal knot that has yet to be untangled.

Did you know that shortly before the 19th century turned into the 20th, an Indiana state senator tried to change the value of PI to 3.2 and actually got some traction before the chairman of Purdue University’s math department explained that it would make the state a laughing stock? Proofiness abounds in our legal system where, in the courts, truth is what the court says it is, and mathematical accuracy simply does not matter.

Given that freedom, mathematical proofiness has been readily used by lawyers to convict the innocent and to free the guilty. Expert witnesses practice risk mismanagement when they testify to having 100% certainty of belief that something will happen in the future that, in reality, they cannot know. And Seife points out that Supreme Court Justice Scalia has more than once cherry-picked data to show judicial infallibility, written in the defense of capital punishment—and that Scalia knew it was proofy when he wrote it.

The book ends with three appendices, one explaining statistical error, one covering the risks of electronic voting, and the last on “the prosecutor’s fallacy,” named for the proofiness that lawyers use the purpose of convincing a jury.

The examples of proofiness presented in this review are only a sampling of what may be found. This book is an important work that belongs on every thinking person’s bookshelf. Proofiness is also is an excellent resource for teachers seeking ideas for topical examples in critical thinking for students, whether their coursework is in math, political science, marketing, or psychology.