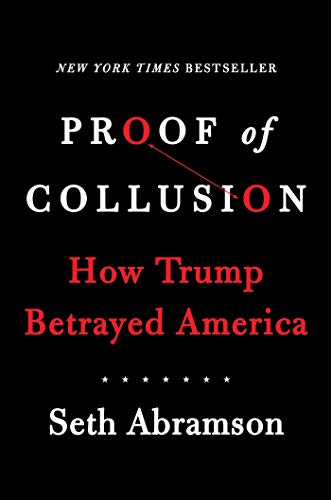 The theory of the case made by attorney, curatorial journalist, and professor Seth Abramson is that Donald Trump and a core group of 10 to 20 aides, associates, and allies conspired with a hostile foreign power, Russia, to sell that power control over U.S. foreign policy in exchange for financial reward and covert election assistance. The resulting Kremlin’s leverage over the president, says Abramson, endangers U.S. national security and the nation’s sovereignty.

Abramson grants that “collusion” has no meaning outside antitrust law. But the federal conspiracy statute is violated when the parties take an “act in furtherance” of the commission of the intended crime. The collusive behavior described here includes criminal behavior—aiding, abetting or conspiracy to commit electoral fraud, computer crimes, bribery, money laundering, witness tampering, lying under oath, and obstruction of justice.

All the evidence points to a verdict of guilty. The criminality grows from the collusion. There is nearly no evidence that might exculpate the key actors. Abramson says that Congressional investigations have been partisan and superficial. They have not used subpoena power to compel disclosure of Trump’s tax returns and other financial records that might point to the use of shell corporations and hidden bank accounts.

The book’s introduction, 14 chapters, and afterword take the reader from 1987 to summer 2018. Each chapter begins with a one- or two-page summary of that chapter’s argument, followed by a brief exposition of the relevant facts, followed by an annotated history that highlights some episodes and paraphrases what is found in the sources used.

Thus, chapter one, titled “Russia and the Trumps,” sets the stage for what follows. It taps a wide range of reports that describe and analyze Trump’s visits to Moscow beginning in 1987 and some visits by his associates. Ranging over three decades, the chapter quotes contradictory claims by Trump and others about what he did in Russia, whom he met, and what was discussed.

Referring to Trump’s Miss Universe contest held in Moscow in 2013, one source quoted the future president as saying that the pageant’s owner has—not just a droit de seigneur—but an “obligation” to sleep with contestants. The annotated histories are a little confusing because they seem to jump from one topic to another, but they fit into the chapter’s opening summary and listing of key facts.

The other 13 chapters follow this format. They include “The National Security Advisory Committee” set up in early 2016 with no well-known foreign policy experts but staffed by several operatives with potentially useful Russian contacts; “The Mayflower Hotel” where Jeff Sessions met with the Russian ambassador but could not remember much about their discussions; “The Hunt for Her Emails;” “The Firings of Flynn and Comey;” and “A Nation in Suspense” while we await the findings of Special Counsel Robert Moeller.

Proof of collusion by Trump et al. is in plain sight, according to Abramson.   Following his theory of the case, the author has gathered evidence from many publicly available sources and put the dots together.

Critics writing in the New Republic and other outlets accuse Abramson of cherry picking the news to support a conspiracy theory. But his book has 109 pages of notes to back up 320 pages of text. Most of the sources are basic—the major U.S. and UK newspapers plus Politico, BuzzFeed News, The Hill, Bloomberg News, Washington Monthly, and conservative news outlet Daily Caller.

Abramson also quotes extensively the trove of Trump’s Twitter statements. For perspective he also cites Michael Wolff’s Fire and Fury: Inside the Trump White House and Bob Woodword’s Fear: Trump in the White House. There seem to be no Russian sources, in Russian or in translation, so that we see/hear nothing from the other side.

Rather than term Abramson a conspiracy theorist, perhaps we should refer to him as a serious researcher working to test a bold hypothesis. If and when we learn the results of the Mueller investigation, we will have a better foundation to assess Abramson’s hypothesis.

The major newspapers have produced useful chronologies such as Meg Kelly, “All the known times the Trump campaign met  with Russians,” Washington Post, November 13, 2017.

Even if some of Abramson’s claims are too broad, any future study of Trump and Russia must use his book as a compendium of facts and assertions that must be included as a starting point if not an end point of investigation.