Promises and Limits of Web-deliberation 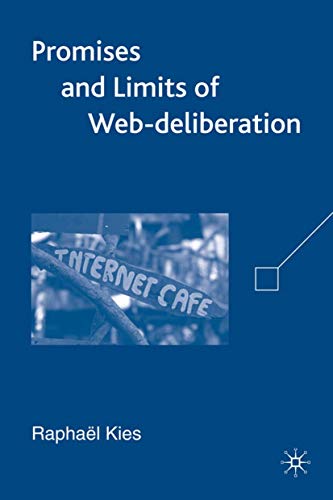 Raphaël Kies is a researcher in political science at the University of Luxembourg; co-founder of the E-democracy center, Switzerland; and a member of Réseau de Démocratie Électronique, France. His stated purpose in writing this the book is to provide a global assessment of the deliberative potentials of E-democracy.

The author’s concerns are evenly balanced. “Optimists welcome the potential of diffusion of online political debates to promote a decision-making process that is more participative, inclusive, and plural. On the opposite side, pessimists see dire consequences for the future of democracy.” Kies asks the important question, “How deliberative can we suppose citizens to be, or to become?” and focuses on what can be garnered from empiric studies that have these qualities:

• Participation of large numbers of people in political online activities

• Measurements of quality of online debate

In attempting to reach this goal however, he falls somewhat short. This book is not as much about the Internet as it is a study of deliberative democracy in America, Canada, and Western Europe, and the possibility greater deliberation due to the presence of the Internet. What would have made this book of greater interest would be a study of how governments choose to make laws to take advantage of the Internet (for good or evil), or a study of the glimmers of E-democracy in repressive regimes, but neither topic is subject matter for this book.

It might be useful to identify for the potential reader other things that this book is not. This book is not about censorship, nor about political blogs, nor the issues of privacy, anonymity, nor the politics of intellectual property, nor the hazards of electronic voting, nor the politics of BitTorrent, Wikileaks, nor Twitter, nor even chatroulette nor Godwin’s law. The author has instead chosen to abstract away the most culturally engaging issues of the intersection of society, politics, democracy and the Internet.  What remains for the reader is dry political theory expressed mostly in postmodern terms and summaries of empirical studies.

Kies recognizes that just because there may be debate doesn’t necessarily mean that that debate is deliberative.  The word “deliberative” is used multiple times before the author admits that it’s meaning is blurry and polemical, so this reviewer checks a dictionary just to be sure, and the clearest definition that can be provided is that deliberation means, “to look at all sides of.” The reviewer must add that one may also have deliberation without deliberation being meaningful.

Kies starts his study with the origins of modern studies of deliberative democracy, in particular the views of sociologists Richard Sennet and Jurgan Habermas. Their initial studies addressed what is called “public space”—the theaters and coffee houses of nineteenth century Europe—however, not much detail is provided about these theaters and coffee houses or what made them special.

In his discussion the author switches to academic postmodern jargon difficult for anyone but academics to be comfortable with. (This reviewer, not a fan of postmodernism, was reminded of Allen Sokal’s hoax, which helped getting through the slog.)  Kies identifies three models of democracy: Liberal, Republican, and Deliberative, which he puts into a table for easy comparison. The differences are overlapping and subtle, and the author notes that nothing prevents all three forms from being present at the same time. Kies then presents a fourth model, the Aggregative model (which should have been put in the aforementioned table but was not) and identifies out the one significant flaw that exists in all of these models, that they are theory. Thankfully though, the entire book is not written this way but the author, in switching from postmodern academic jargon, then switches to an agonizing use of repeated “on the one hand . . . on the other hand”s. Balance may be a good thing, but cliché never is.

The normative requirements are defined as:

• The debate’s ground-rules (in postmodernese, “norms of discursive rules”)

The last chapters of this slim book provide details of several empirical studies. These studies were of politically oriented online deliberations including conversations, consultations, and debates. The author also notes that the results are ambiguous, the interpretations varied, and do not support any theoretical model.

This reviewer considers that the effort of empirical study may be likened to dipping a bucket into the infinite possibility of human behavior (limited in this instance to the U.S., Canada, and Western Europe) and then attempting to characterize all of humanity through the contents of that bucket. The author concludes this chapter with a plaint that, “Empiric investigation of deliberation is still a very exploratory research field” (which should be recognized as code for, “Please send money.”). Kies then changes his initial search from, “Do web debates increase the deliberative character of democracy?” to one that permits more tractable analysis, an identification of:

• The characteristics of citizens who debate online for political discourse

• The characteristics of the sponsors of the debate

• There is significant distrust in the political process, particularly of federal governments and of political parties.

• The Internet is increasing as a source of information as compared to other media.

• The educated tend to participate more than the uneducated.

• The maturity of debate tends to be proportional to the impact (i.e. the more serious the impact, the more mature the behavior).

• A small but significant percentage (of Americans) use the Internet to share and exchange political views.