"Promise Me You'll Shoot Yourself": The Mass Suicide of Ordinary Germans in 1945 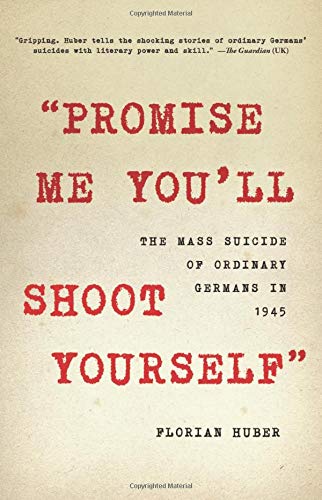 “As with many other topics related to the world’s greatest and deadliest human conflict, there is much here for all of us to learn, know and try to understand about ourselves in chaotic and overly distressing circumstances.”

Although there have been some accounts in the past surrounding this topic, the suicide of Adolf Hitler immediately comes to mind, the self-inflicted deaths of many everyday Germans have largely remained unknown or at least obscure when it comes to World War II. Obviously, suicide, and especially mass suicide, is an unpleasant and tragic subject, yet its discussion here is necessary and relevant in the context of specific wartime acts and events.

As is referenced in the text, there were multiple reasons for this mass suicide. They ranged from the obvious retribution of the invading Soviets (from occupation and forced labor to systematic rape and looting), Western Allied occupation, despair over the collapse of the National Socialism system, the country’s physical destruction, and a general lack of hope for the future under new political systems enforced by the Allied powers, among others.

A facilitating factor in this was the Nazis’ own propaganda, describing the Allies as ravening beasts and gangsters who would wreak their vengeance on the population following Germany’s surrender. Also, not surprisingly, knowledge, no matter how little, of the violence and atrocities the Nazis had committed in their name also fed a sense of guilt and shame by war’s end.

Author Florian Huber has approached this subject not by trying to document every instance or suicide venue but by concentrating on the most extreme example which occurred in the town of Demmin in Pomerania. For the reasons enumerated above, an estimated several hundred to perhaps more than one thousand of its citizens (specific numbers cannot be determined) took their own lives beginning around May 1, just before and after the Soviets occupied the city.

They died individually or by family, friends, and neighbors. The methods were as varied as the reasons. Given that the city was bordered by two rivers, there were many drownings. Hanging, shooting, wrist slashing, and poison were the other methods employed. Mothers killed their children before doing in themselves and fathers sometimes did the deed for their entire family to ensure death for them before their own suicide.

Of course, many women did so in order to avoid mass violation and rape, and even post-violation, by victorious Soviet soldiers, many times fueled by access to excessive amounts of alcohol, intent on “returning the favor” in terms of the same which the Germans committed on the Eastern Front over nearly four years of war.

Adding the suicide tolls of many other German cities and towns, one can see the final result of this mass wave of self-destruction: Thousands of victims, most of whom were buried in mass graves and, in East Germany, mostly quietly forgotten and neglected or whose demise was blamed on Hitler Youth, the SS and other organs of the Nazi state.

Finally, in the second half of the text, Huber has juxtaposed this “dance of death” with how renewed and rejuvenated many of these every day Germans felt about themselves and their country under National Socialism in the 1930s in order to further emphasize and explain the depressed state of mind, despair, and hopelessness that they experienced once their government and orderly social system collapsed in the spring of 1945.

As one can imagine, photographing or otherwise depicting death in any form is a lack of humanity and dignity for the dead, not to mention an invasion of privacy. Consequently, there are just a literal few photographs included here of suicide victims. They were taken by two accredited female news journalists embedded with U.S. Army forces. All other images depict pre- and postwar locales and venues referenced in the text.

The notes are referenced by quote and its respective page; in a word, nontraditional. However, the bibliography shows sources ranging from reports, diaries and memoirs to selected books, documents and even German language publications. Disturbingly, there is no index included.

This book is a first-time North American edition, the original having been published by the author in German in 2015. Hopefully, this will open the eyes of many in this hemisphere to one of the little-known tragic and final consequences of World War II.

As with many other topics related to the world’s greatest and deadliest human conflict, there is much here for all of us to learn, know and try to understand about ourselves in chaotic and overly distressing circumstances.