The Promise of the Grand Canyon: John Wesley Powell's Perilous Journey and His Vision for the American West 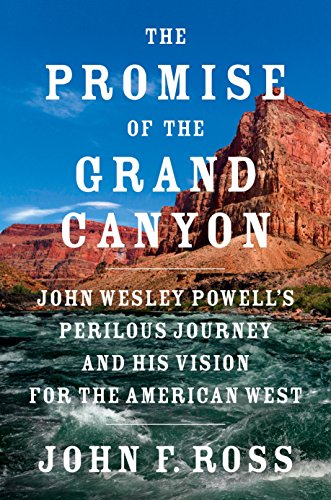 In spite of previous written and documentary video accounts of John Wesley Powell’s trip down the Colorado River through the Grand Canyon, relatively little is known about the man and the rest of his career. Consequently, this is not just a retelling of that story but a biographical treatment of his life including the professional career and scientific accomplishments of a man whose personal vision demonstrated considerable prescience relative to the modern-day West.

In spite of his father’s position as a Methodist preacher, John Wesley never went that route in his life although he did pick up and adhere to a paternal stance on the institution of slavery. Much of his early life was spent in the company of a man from whom Powell took a surprising interest in geology and other facets of the natural world, much to the disdain and disappointment of his father who had expected his son to follow in his own Methodist footsteps.

His education led him to academic positions in early adulthood to the point where he became a well-recognized authority on North American flora and fauna, such that even he realized the “truth” behind Charles Darwin’s theory of natural selection and Biblical experts’ estimation of the timeline for the creation of the earth was faulty by millions of years.

Considering the paternal stance on slavery, it was only natural that Powell would almost immediately enlist in the Union Army to fight against secession. His service, and loss of an arm by amputation, at the Battle of Shiloh in April 1862, in command of an artillery battery, brought him to the notice of General Ulysses Grant which subsequently provided him with an in and, for that matter, influence later in his career in government.

With much of western America having been previously explored by others, that left the greater Four Corners area of the Southwest as the only largely unexplored part of the country remaining, including the Green and Colorado Rivers. Although discovered by Spanish conquistadors, the Grand Canyon had not been navigated throughout its length.

With eight others, this was accomplished although three members of the expedition left some 24 hours prior to reaching the end of the canyon. The ultimate reason for the loss of those three was never positively determined in spite of investigation, and Powell regretted their deaths for the rest of his life.

The real highlight here is the rest of Powell’s career and his trials and travails against others in competition for research money and support, geological and animal specimens, and samples from later exploratory expeditions. He ultimately became head of the U.S. Bureau of Ethnology as a result of his interest in Native American culture yet he came up against considerable opposition from many, including those in high places in Congress.

With the Gilded Age of the later 19th century and the endemic corruption in government and industry, the attitude was ubiquitous that America’s available resources were there for everyone’s taking in a multitude of get-rich-quick schemes and the devil take the hindmost.

His referenced influence protected him for some time yet he was eventually forced out even as his health began to fail as he aged. Still, his expertise was such that he was able to warn then, presciently, that the American West and its resources were not infinite, and that the greatest concern would be the exploitation of the land relative to the amount of water available, something to which we can all relate in the 21st century as our population continues to expand.

Especially helpful in this volume are the maps showing the venues and route followed by Powell during his expedition through the West so that one may follow along and locate many of the places referenced in the text. The footnotes and their citations are to specific references or quotes in the text. Fortunately, they show a decided use of archives, papers, articles, and other primary sources along with usual secondary ones.

This interesting volume is a self-contained story of the life of John Wesley Powell, highlighting his many battles, political and otherwise, to bring the value and potential of the American West to the attention of his government and fellow citizens. Is it possible to now follow through on his vision?