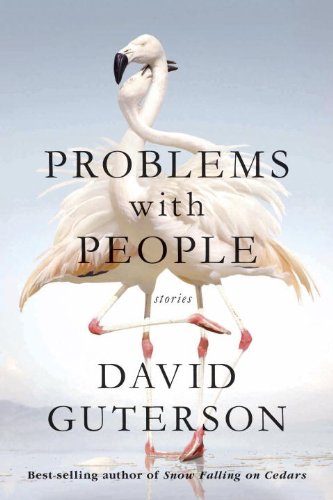 “. . . admirers of David Guterson’s work and of the wry humor evident in many of these stories, will find much to attract them here, . . .”

The title of David Guterson’s second short story collection could well serve as a succinct definition of fiction itself, for where would our stories be without the tension of conflict and misunderstanding? The characters that populate the stories in this slender volume struggle with plenty of both, caught in the shifting sands of middle age, the confusions of elder years, or the emptiness of a failed relationship.

Isolation is the thread connecting these ten stories, as in the case of the absentee landlord confronted with a new renter. “He wondered but made no move to find out about her,” Guterson writes in “Tenant,” “fearing that by asserting himself he might pave the way for a burdensome relationship, invite nuisance, regret his forwardness, ultimately end up with more trouble, work and concern than if he’d stayed in the background.” Meeting the new tenant face-to-face hardly proves an antidote to the landlord’s loneliness, so that all he can manage is to tell her is “I’m going to get out of your way now.”

Even more cut off from normal human relations is the retired and elderly father in “Focus” struggling with the early stages of dementia and bewildered while trying to board a flight to visit a wayward son. “He was a man who still knew how to operate in the world,” the nameless narrator insists of himself. “So what was wrong with everybody? Talking about him as if he was a baby . . . talking about him as if he weren’t there.” But disaster strikes at the airport, culminating in an unpleasant encounter with security personnel and a drive home without ever leaving the ground.

Two of the stories deal explicitly with Jewishness, which historically has been marked by even more impregnable barriers. “Hot Springs” is the lighter of these two stories, as a retired judge deals with his elderly and outspokenly Jewish mother and her dislike of his Gentile wife.

“Krassevitseh” observes a quarrelsome father and son touring the Jewish sites of Berlin and the father’s blunt treatment of their German tour guide, which turns especially painful during a tour of Sachsenhausen, one of the most notorious Nazi death camps. “The last thing I’d do is buy anything German,” the father rants, “not a car, nothing,” adding that when his wife bought him a Braun shaver, he traded it in for a Schick. “He means well, he really does,” the son apologetically tells the tour guide, who merely shrugs and notes that Berlin is full of ghosts.

Guterson writes in the clear, unadorned prose that graces his longer works, most famously 1994’s Snow Falling On Cedars, a more profound examination of our inability to understand each other than can be found in these shorter tales. But admirers of David Guterson’s work and of the wry humor evident in many of these stories, will find much to attract them here, not the least of which is the concluding story, “Hush,” in which at least one connection between human beings clicks into place when a young dog walker becomes a companion for another of Guterson’s irascible older men. This one is dying, alone in a hospice, when the young woman comes for a last visit.

It’s a beautifully rendered scene showing us that despite our problems with one another, there may still be hope for us all.