The Problem of Democracy: The Presidents Adams Confront the Cult of Personality 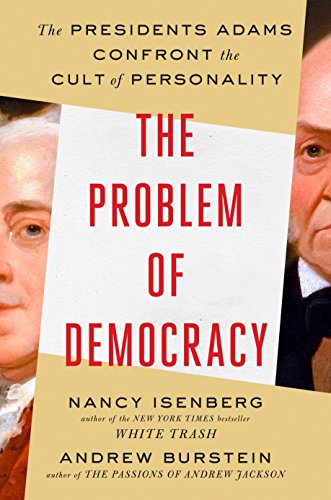 “a cautionary tale of ambition, service, and the passing down of the mantel of public service from father to son . . .”

America’s first father-son duo, the Presidents Adams, provide a fascinating tale of  politics, familial relationships, and the founding and evolution of the American presidency. In this combination of biography and political science, the authors present these two men as the bookends of the Revolutionary era, beginning with John Adams’ entry into colonial politics and ending with John Quincy Adams’ final days in office during the Mexican War. Both their public and private lives are a mirror of the progression of American politics and statecraft from the joining of the colonies into a unified nation to the rise of political parties and division.

John Adams is almost forgotten to most Americans. Wedged between the towering Virginian presidents, George Washington and Thomas Jefferson, the diminutive New Englander fought for recognition of his contributions to American independence most of his adult life.

Adams had a conflicted relationship with politics in general, bemoaning the need for office-seekers to conduct the messy business of political deal-making and campaigning. An overly moralistic believer in virtue, knowledge, and dispassionate public policy making, he never seemed to  grasp the emotional or personal side of politics, disdaining men he thought overly ambitious or personality driven as office seekers.

This is particularly true of his relationship with George Washington, who was essentially anointed president in 1792 and re-elected almost by acclimation in 1796. Although Adams had great respect for Washington, in his private letters to John Quincy he expressed his distaste with the reverence and adulation showered on Washington. Adams, who spent most of the Revolutionary War in a variety of European diplomatic posts, spent a great deal of time and energy promoting and defending his achievements and reputation, a great irony for a man who spent so much of his lifetime correspondence decrying the role of personal glory and popularity in the ruling class.

As president, Adams had to deal with a number of domestic and foreign policy challenges. Seeking to maintain Washington’s neutrality to the French Revolutionary Wars engulfing Europe, Adams tried to keep the peace between pro-French and pro-British factions not only in the country as a whole, but within his own administration. The rise of a vociferous and scandalous partisan press also challenged Adams, who had to deal with the first overtly split government as he attempted to emerge from Washington’s shadow. Never a hardy campaigner, his one-term presidency allowed him to return home and spend the rest of his life defending his legacy while advising his son.

John Quincy Adams was probably the most qualified candidate of his day to assume the presidency. Raised in a political and diplomatic household, he travelled extensively with his father during the Revolution as his de facto private secretary before becoming  a diplomat in his own right. Working diligently to emerge from his father’s shadow and create his own achievements, he also held a number of European diplomatic posts before becoming James Monroe’s workman like Secretary of State.

Continuing his father’s disdain for personality politics and campaigning, John Quincy was elected president in 1824 in the only election in American history to be decided by the House of Representatives after no candidate won a majority of the Electoral College. John Quincy was also the only president to serve in Congress after leaving the presidency, noting his election to the House in 1830 as a bigger moment of pride than winning the presidency. While in the House, John Quincy became a vocal opponent of slavery, earning his final fame as the lawyer for the defendants during the Amistad trial.

Modern readers may be surprised to learn that contemporary politicians did not invent partisan slander, media bias, or ad hominem personal attacks. Politics in America has always been a contact sport, even if some participants like this father-son duo tried in vain to stay above the fray.

Both men served their country with dignity and fervor. While each tried to contrast themselves with their large than life contemporaries, George Washington and Andrew Jackson, both also felt cheated and marginalized from the recognition and admiration they felt their long service to America deserved. Unfortunately, neither man truly understood or agreed with the rise of political parties that soon dominated the presidential process and governing in general.  The story is a cautionary tale of ambition, service, and the passing down of the mantel of public service from father to son.