The Prized Girl: A Novel 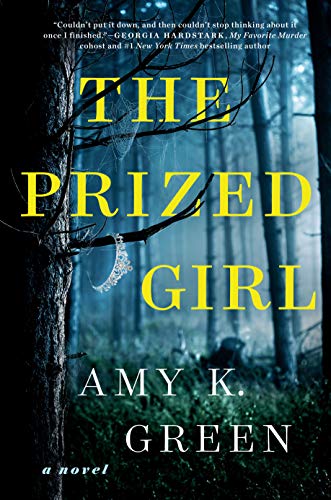 When she was young, Virginia Kennedy, an only child, suffers the loss of her mother who commits suicide. She never causes her parents any problems, but after this tragic incident, her father becomes aloof and Virginia becomes no longer well-behaved. Then when her father marries Linda, who gives birth to Jenny when Virginia is 13, all focus is placed on Jenny, “The perfect child."

The difference in years makes it hard for Virginia to feel close to Jenny, and the praise and expectations thrust on Jenny to enter pageants where she excels becomes Linda's fixation. At the age of 13, Jenny decides she had enough of her mother's obsessive and constant hovering, deciding to give up her beauty-queen status, causing animosity between her and Linda.

Meanwhile, Virginia, now 27,  still lives in her small hometown of Wrenton, MA, in a tiny studio apartment. She can't seem to hold a job, and she spends her weekends drinking and self-medicating with pills. As a teen, she engages in an illicit affair with her teacher, Mark Renkin, which now, after all these years, still has her thrown off balance. He is her one true love, and she truly believes when she graduates, he would marry her. However, he states she needs to experience life without him, to find herself, and be sure of what she wants. He discloses this to her on her 18th birthday when he is 32. Even though Virginia is still fixated on him, he has moved on to a relationship with Hunter Willoughby, the school guidance counselor, and a woman only a few years older than Virginia.

Jenny begins to act out by skipping school and sneaking out in the middle of the night. She befriends JP, an older classmate and somewhat of an outcast, and she starts to ridicule her friendship of her life-long friend, Mallory and the other girls in her class. Jenny is headed on a collision course, which later causes her brutal murder, with the main suspect being Benjy, an emotionally handicapped man who followed Jenny's "career" as a young beauty queen by attending every event.

If the family had not disintegrated before, it is way off the tracks now. Linda hides in the bottle, the girl's father is never at home, allegedly working, yet Virginia is expected to attend their usual Sunday dinners, which have become a nightmare.

Though Virginia s never close to Jenny, she is filled with guilt and remorse. Could she have done something to help her sister? As her own culpability plagues her, she becomes suspect, thus making it her mission to learn the truth.

Virginia does not believe Benjy is responsible, though he may be holding a clue as to who committed the crime. But can his information be believed? Did a drifter kill Jenny? A friend of hers; like PJ, the boy she befriended from school? Maybe even Mark? After all, he has a penchant for underage girls, so did Jenny confront him about this? Or worse, did an intoxicated Virginia unknowingly kill her sister?

Her fascination with Mark has had her phoning him in a drunken haze over the years, which has her wondering if he had any involvement in Jenny's death. She confronts him, and he goes soft, telling her he's miserable without her though he's now with Hunter. Is this supposed to be part of his charm? To lure her back, so she won't ask questions about Jenny? He tells her he's aware she's been calling him for years.

"'The calls, almost every Saturday. I know it's you. I have caller ID.'

"'Jesus, how messed up are you? You don't know you're calling me?'

"I choked hard on the emptiness in my throat. Is this what I was doing when I was blacking out? I was embarrassed, ashamed, and afraid of myself. I didn't want to hear anymore. I started walking away again, as fast as I could without actually breathing. . . .'

". . . I swung my arms, trying to get back to my car as quickly as possible. I knew I was blacking out—that was the point—but how could my unconscious self build such a wall from my conscious self? Was I insane? Was I on the verge of a mental breakdown, or was I just a raging addict? I didn't feel like an addict. I didn't crave alcohol or drugs. My Saturday-night drinking binge was more of a ritual."

As both Virginia and Jenny state their explanations, backstories are intertwined with the list of suspects growing, giving no real clue as to who the killer is. The Prized Girl digs deep into the psyches of most of the characters, many of whom are flawed with secrets and insecurities. The conclusion offers an unexpected twist that is sure to surprise, but the core of the tale independent of the murder introduces sibling rivalry and parents loving one child over another, causing jealousy and heartache that ends with regret.