The Private Lives of the Tudors: Uncovering the Secrets of Britain's Greatest Dynasty 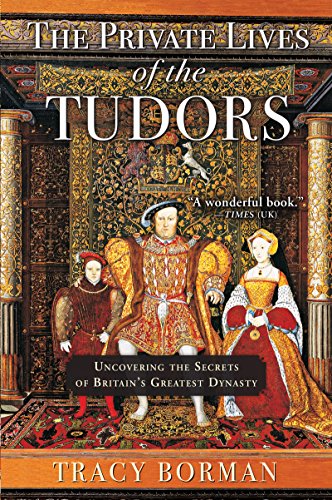 “a fascinating and informative account of the personal lives of the Tudors.”

More than likely, even if one does not recognize the Tudor dynasty, the names of Henry VIII and Elizabeth I should certainly be universally so. Included in the Tudor lineup as well are the lesser known Edward VI, Mary and the following collateral generation of Lady Jane Grey and Mary, Queen of Scots, which led to the Tudors’ demise and the ascendancy of the House of Stuart.

While much of the political, diplomatic, and military history of this royal house has been extensively covered previously and by many, their private lives, feuds, conflicts, and relations behind the scenes have not been nearly so much, notwithstanding the historiography of Henry VIII and his six wives.

Author Tracy Borman, holder of a PhD and joint chief curator of Historic Royal Palaces, has written previously on topics of English and royal history. She has taken this particular subject and provided more than just a chronological account of these men and women who had so much influence on world and European history and continue to fascinate some 500 years later.

Chronicling the rise of the Tudors, with Henry VII, and the end of the War of the Roses, essentially a civil war over royal succession, Borman covers the all-encompassing need of each Tudor monarch to secure “title” to the throne and produce an heir in order to perpetuate the dynasty. Not surprisingly, the sex lives, affairs, and suspected affairs are all covered here.

The many pregnancies and miscarriages of queens and female courtiers and mistresses relevant to the story are included as well as the details of and techniques employed in childbirth in the medieval era in sometimes graphic detail. Each potential heir’s birth is followed by a description of the royal manner of raising children, largely without parents present, but, of course, in the lap of luxury.

Related and investigated are the intrigues, the gossip and scandal which ran rife through the Tudor court for nearly 120 years, including Henry VIII’s own intrigues when it came to establishing the Church of England in order to facilitate his many marriages and his marital troubles which resulted in the executions of Anne Boleyn and Katherine Howard.

At this far remove, it is not necessarily possible to determine all of Henry VIII’s mistresses and affairs or the purported virginity of Elizabeth I (from the lack of any absolute evidence, the conclusion would seem to be that she was the Virgin Queen in spite of a teenaged flirtation and then later intimate relationship with Robert Dudley).

As in birth and life, so is aging, disease, and death. Each monarch wanted to portray to the common people an individual prowess, physical health, and vigor so as to demonstrate strength and invulnerability, if not an immortality of a kind, which would preclude any revolts or challenges to their throne and authority.

Again and graphically, medieval medical techniques are specified in the text in terms of how disease was treated, inasmuch as tuberculosis, the plague, influenza, measles, smallpox, fevers, and other disorders were largely endemic in England. While we today would consider these techniques as primitive or misguided, they really didn’t know any better and survival was mostly a matter of luck.

Even without any pathological assaults, aging is a natural process and, in spite of living their lives in luxury, Tudor monarchs could always see the end would eventually arrive and, in the case of Henry VIII, there was a scramble for succession. His only son, Edward VI, never attained adulthood, which then set off the convoluted fight between Mary and Elizabeth following the nine-day reign of Lady Jane Grey who was out of her depth when it came to the monarchy.

So much more is covered in this story (clothes and fashion, royal customs, hygiene and sanitation, palace building and financing it all) that precludes summary but, suffice to say, the detail is considerable as with the rest of the book.

Extensive primary and secondary sources demonstrate the depth of research in spite of missing or lack of surviving records. The photographic section is in color and provides portraits of many of the cast of characters, woodcuts, and other illustrations of medieval subjects, surviving furniture, and other personal items.

This is a fascinating and informative account of the personal lives of the Tudors. So much so that it is certain that the average person would surely be unfamiliar with much of this history. One can only imagine what we don’t know about this complicated and conflicted royal dynasty.