The Prisoner of Hell Gate: A Novel [Review II] 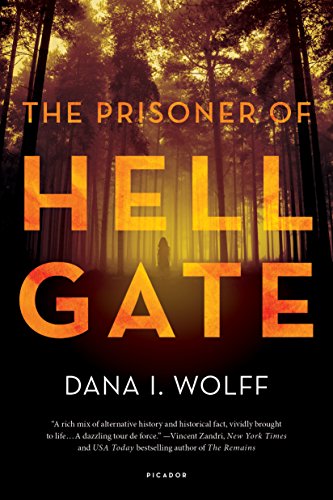 “Don’t read this book if you live alone in a remote cabin. Don’t read it if you whistle in the dark to settle your nerves. Its creepiness will unsettle you but good.”

In this suspense thriller, Dana Wolff’s heroine is Karalee Soper, graduate student of public health and great-granddaughter of George Soper, the physician who initially tracked down Mallon and locked her away where she could no longer harm others. Until now, apparently.

On a pleasant summer evening while boating with friends in the East River section known as Hell Gate, Karalee persuades her companions to stop ashore and explore the uninhabited North Brother Island, once home to the long–abandoned Riverside Hospital where Typhoid Mary languished. Kate “measures the passage of time only by the height of the choking vines, once kept at bay, now running riot. And by the changing skylight across the way.”

Kate’s sensitivity is both a blessing and a curse, because it hurls her and her companions toward one trouble after another. Her shore proposal sounds like a great excuse for an impromptu adventure. And after all the members of the boating party are all budding experts in communicable diseases. This naturally makes them full of hubris.

And also prone to suggestion as Wolff draws on suggestibility and conventions of the horror genre that readers don’t encounter much more. “Here, now, as if reading her mind, the apparitions appear . . . She thinks of the tin box in the laboratory. M Mallon it once said on the now-fading tag. A year’s worth of samples, bottled up much time ago and festering every since.”

Veteran mystery readers will see where the set–up is going, and so the question is how well Wolff leads us along, teases us, misdirects us, and delivers the inevitable punch. The answer, happily, is pretty well. The author leaves sufficient ambiguities unresolved: Who on the abandoned island is tending the garden next to the decrepit greenhouses? Who is the hermit woman who shelters them during a storm and cooks them dinner? Who hacked the bottom out of their boat, thereby preventing them from leaving the island?

Ever since Agatha Christie’s Ten Little Indians, if not before, the plot device of one character after another meeting their end has been a staple of the genre. Woolf skillfully handles the elimination here, and manages to serve up a final surprise at the end as the last survivor finally understands the forces and karmic family connections that bring her to her fate.