The Prisoner of Hell Gate: A Novel 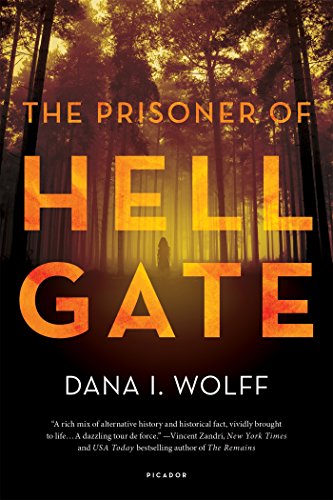 Mary Mallon, “Typhoid Mary” as she was best known, was an Irish immigrant who worked as a cook in several well-to-do homes, but that was not what she was best known for. She was a typhoid carrier, and as she went from home to home, so did the disease she spread.

Dana I. Wolff’s debut novel The Prisoner of Hell Gate is a horror tale loosely based on several happenings near or on North Brother Island, the place of Mary’s incarceration. Wolff whips these happenings into a recipe befitting Mary Mallon’s life as a cook and dispenser of typhus.

The story begins when a group of five college friends—they call themselves the River Rats—four graduate students and one professor, take a leisurely boat trip along New York’s East River Hell Gate and end up on North Brother Island. Their curiosity about the history of the island and the Riverside Hospital that housed infectious patients at the turn of the century draws them onto the island and into the horrors that haunt the now dilapidated buildings and their gruesome history.

Wolff does not give these characters the maturity they deserve. Rather they come across as perhaps high school seniors high on beer and drugs. Perhaps not unrealistic in today’s age, but not quite what is expected of the characters.

Wolff establishes two main characters: Mary Mallon, dead since the 1930s, (or was she?) yet alive to the island; and Karalee Soper, the granddaughter of Dr. George Soper, the man credited with tracking the culprit responsible for the typhoid deaths and incarcerating her on North Brother Island.

Wolff develops the main characters by switching chapters and points of view. Through this process both Karalee and Mary express their thoughts about the history of the island and its best-known inhabitant and how Mary came to be there.

While doing this, Wolff takes the opportunity to explore both Mary’s history and a horrific boating disaster of the PS General Slocum. The story becomes a bit confusing, since Mary’s first incarceration occurred in 1907, but the boating incident occurred in 1904.

Regardless of timing, Wolff takes the boating event and the great loss of life as a result of it, and brings the victims into a ghostly state on the island, where they exist, presumably through eternity. The author also uses this event to bring to “life” a mother and two children who carry on conversations with the already dead Mary. The purpose of these characters is unclear.

As they snoop through the various dilapidated buildings on the island, they find packages of food, which they devour . . . one wonders how long the food must have been there and why these students would actually eat it!

Eventually, they encounter a strange woman who lives on the island alone. They do not immediately recognize who she is, but Mary realizes that Karalee is the granddaughter of the man who imprisoned her, and revenge, in this case, is a dish best served hot. She knows what they don’t: that she is the manifestation of Typhoid Mary and before they come to this realization, she has cooked a rabbit stew and shares it with them. Again, one wonders why they would eat this food!

The story progresses with the eventual knowledge of who their host is, and finally through a series of horrific deaths, but not before the ghosts of the ship disaster rise—literally from the dead—and go in pursuit. It is not clear exactly what role these figures play in the story and the ending is a let down.

The premise is a good one but the style and writing are often slow and not engaging. Fans of the horror genre may find this story exciting. Wolff creates some good tension as the story progresses toward the inevitable end, but loose ends remain, including the purpose of the ghostly apparitions as well as Mary’s existence.