The Prisoner of Heaven: A Novel 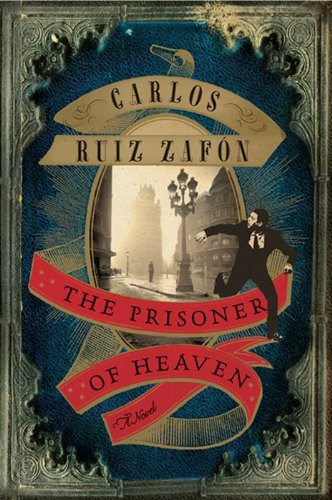 The Prisoner of Heaven is a killer. The story has heart, menace, torture, kindness, cruelty, sacrifice, honor, and a deep devotion to what makes humans tick. Nothing is out of bounds and no emotion is left hidden in the recesses or characterizations of Daniel Sempere, his wife Bea, and Daniel’s devoted friend Fermin Romero de Torres in mid-20th century Barcelona.

The past and present intermingle with possibilities of terror, loss, and hatred, as does the opportunity for forgiveness, release and repentance.

The Prisoner of Heaven is the third book in the series, of which there will surely be another, and continues the story of booksellers, writers, dictatorship, civil war, family secrets, history, and individuals struggling with right and wrong.

Carlos Ruiz Zafon clearly has Barcelona and its everchanging weather in his bones, as it seeps through the pages with traditional clarity and simultaneous screams at authority.

Contrition is not easily given or accepted; pretense is seldom tolerated; and contrived conclusions or expectations rarely fulfilled.

An exquisite example of Mr. Ruiz Zafon’s ability to summarize a character’s reflections about a situation is exemplified when Fermin declares, “If there’s going to be a flavor in vogue in this age of butchery, it will be the stink of falsehood and urine disguised in a thousand euphemisms.”

This sense of defeat and hopelessness is also conveyed when Fermin tells a doctor in prison, “Sometimes one just gets tired of fleeing. The world’s very small when you don’t have anywhere to go.” There are moments when Daniel and/or Fermin have nowhere to hide from their circumstances, figuratively or literally and the sense of helplessness and vulnerability this creates for readers is poignant and raw.

Despite moments of longing and desire to give up when they see nothing but pain and suffering in their future, all of the protagonists cling fiercely to living and finding ways to make hope and change a reality for themselves and those they love.

The underlying compassion and love that Daniel has for his father, wife, friend, and son is palpable, as is Fermin’s for all those he encounters, even some inside the hellhole of Montjuic Castle—a notorious prison for Franco’s foes, those who complained about the status quo or winked at the wrong person at the wrong time—where he is mercilessly imprisoned.

The Prisoner of Heaven moves like a bullet train. There are few stops along the way (three to five pages for each chapter), and the end of one section jumps headfirst into the next, leaving you no choice but to leap ahead and not stop running (or reading in this case).

This story, filled with those who have killed or are being threatened to be killed, is dead on. It is not necessary to have read the previous books in the series (though the original The Shadow of the Wind is a masterpiece), as this story stands upon its own merits with clarity and strength. The only shadow that falls upon The Prisoner of Heaven is that readers have to wait for the author to continue his creations and will not find out what befalls Daniel, his family, and friend Fermin until the next book is written.