The Princess in Black and the Giant Problem 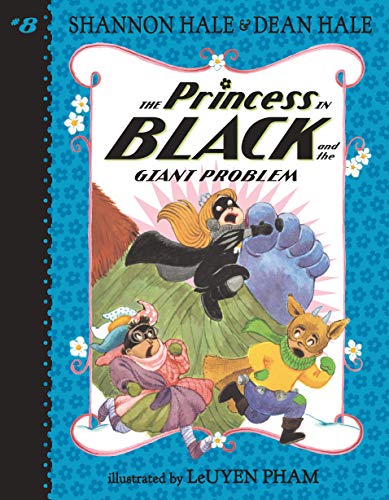 “The Princess in Black and the Giant Problem benefits from being a story about princesses and superheroes, which apparently little girls can never resist even if the story is ho-hum.”

If you’ve been a fan of the Princess in Black series all along, no doubt you’ll have fun with this one, too. If you’re new to the adventure, this isn’t the book to start with.

This eighth book in the series begins with the Princess in Black wishing she could have another party. She at least has a snowy playdate with her friends the Goat Avenger and the Princess in Blankets. The three of them build snow monsters and get ready for an epic battle just as a giant foot smashes their snow monster. This giant utters only one word over and over and over: “SQUASHY!” And then he proceeds to smash everything in his path. Nothing they do can stop the giant, who heads toward the village. The Princess in Black and her friends panic that the village will be destroyed.

The Princess in Blankets saves the day by lighting the Sparkle Signal and summoning help from all the Princess in Black’s friends, who arrive with their sidekicks. The heroes trap the monster and save the village. As a fun finale, readers discover that the giant isn’t what they think it is.

When choosing a book for a young reader (the book is targeted to the 5–8 age group), plot, character development, or even clever language isn’t necessarily that important—although there are plenty of early chapter books that capture all of that and more.

Nice illustrations are a plus, but they’re not essential. With The Princess in Black and the Giant Problem, the bar is pretty low. It benefits from being a story about princesses and superheroes, which apparently little girls can never resist even if the story is ho-hum. The book does have large print, accessible vocabulary, and plenty of sweet, imaginative illustrations by LeUyen Pham. Kids will appreciate the short chapters, be pleased to follow a simple storyline, and enjoy the surprise ending.

Having said this, an early chapter book can deliver so much more and this one doesn’t. In fact, with the addition of a dozen more characters and their sidekicks, the risk is that young readers will get lost. Unless they’ve been introduced to most of the characters in an earlier book, the extra characters could confuse an early reader, especially since except for showing up and helping contain the giant, they don’t do much.

Adding to the complexity, everyone arrives in costume. Giraffe shows up as Mr. Hiss, the snake. It’s followed by Violet Pilot and her plane, Silver Belle; Sun Block and her sea snail, Slim; Super-Meow and her Cat-fish, Purr-maid. You get the idea—so many cute names, but not much else. If the reader has read the previous books in the series, maybe these are all familiar characters. If not, it’s a jumble.

No doubt the ease of reading and the princess and superhero themes carry this popular series. Too bad it doesn’t offer more.